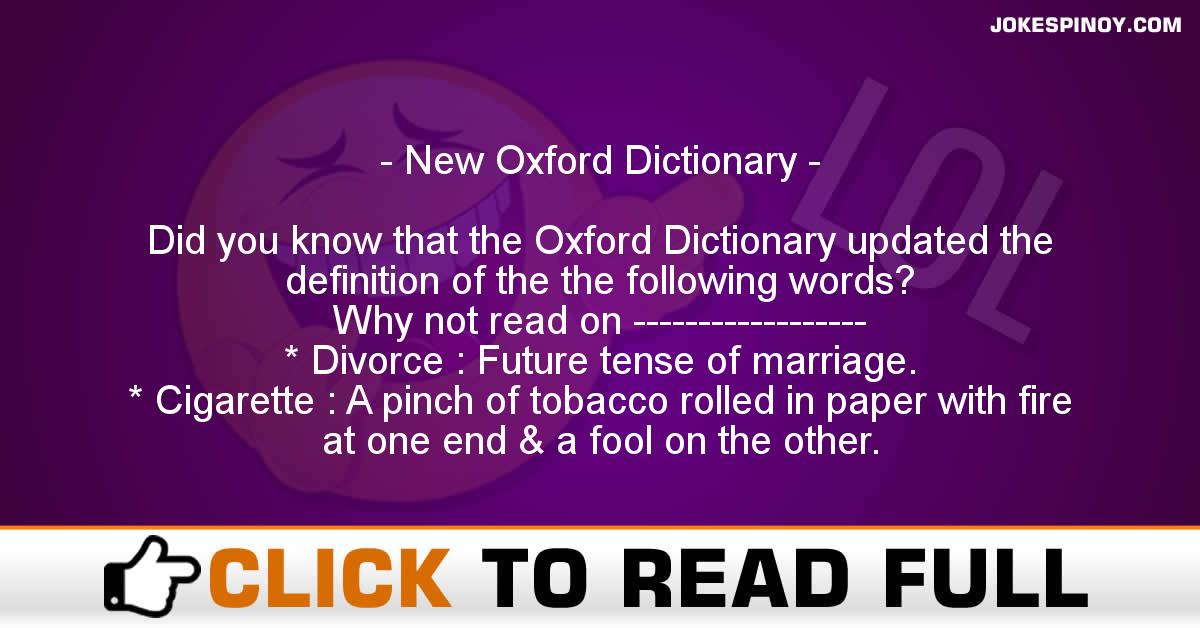 Did you know that the Oxford Dictionary updated the definition of the the following words?
Why not read on ——————
* Divorce : Future tense of marriage.
* Cigarette : A pinch of tobacco rolled in paper with fire at one end & a fool on the other.
* Lecture : An art of transferring information from the notes of the lecturer to the notes of the students without passing through “the minds of either”
* Conference : The confusion of one man multiplied by the number present.
* Compromise : The art of dividing a cake in such a way that everybody believes he got the biggest Piece.
* Tears : The hydraulic force by which masculine will-power is defeated by feminine water power.
* Dictionary : A place where success comes before work.
* Conference Room : A place where everybody talks, nobody listens and everybody disagrees later on.
* Classic : A book which people praise, but do not read.
* Smile : A curve that can set a lot of things straight.
* Office : A place where you can relax after your strenuous home life.
* Yawn : The only time some married men ever get to open their mouth.
* Etc. : A sign to make others believe that you know more than you actually do.
* Committee : Individuals who can do nothing individually and sit to decide that nothing can be done together.
* Experience : The name men give to their mistakes.
* Atom Bomb : An invention to end all inventions.
* Philosopher : A fool who torments himself during life, to be spoken of when dead.
* Diplomat : A person who tells you to go to hell in such a way that you actually look forward to the trip.
* Opportunist : A person who starts taking a bath if he accidentally falls into a river.
* Optimist : A person who while falling from Eiffel tower says in midway, “See I am not injured yet.”
* Miser : A person who lives poor so that he can die rich.
* Father : A banker provided by nature.
* Criminal : A guy no different from the rest….except that he got caught.
* Boss : Someone who is early when you are late and late when you are early.
* Politician : One who shakes your hand before elections and your Confidence after.
* Doctor : A person who kills your ills by pills, and kills you with his bills.