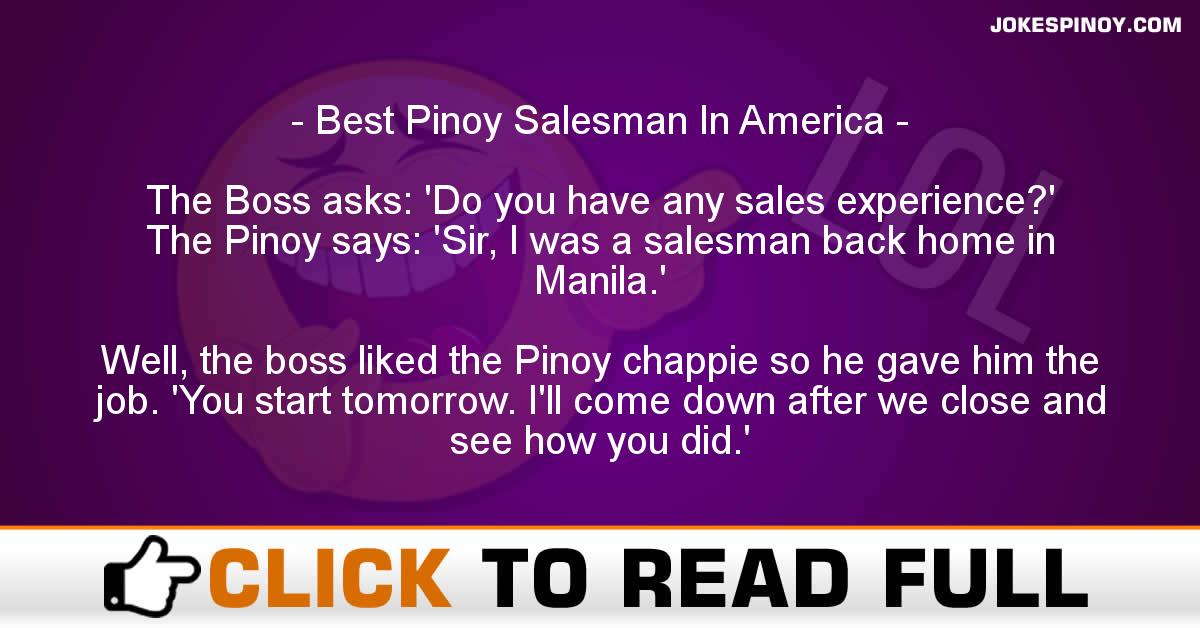 The Boss asks: ‘Do you have any sales experience?’
The Pinoy says: ‘Sir, I was a salesman back home in Manila.’

Well, the boss liked the Pinoy chappie so he gave him the job. ‘You start tomorrow. I’ll come down after we close and see how you did.’

His first day on the job was rough but he got through it. After the store was locked up, the boss came down. ‘How many sales did you make today?’

The boss says: ‘Just one? No! No! No! You see here our sales people average 20 or 30 sales a day. If you want to keep this job, you’d better be doing better than just one sale. By the way, how much was the sale for?’

Pinoy boy says:’Sir, First I sell him small fishhook. Then I sell him medium fishhook. Then I sell him large fishhook. Then I sold him new fishing rod and some fishing gear. Then I ask him where he’s going fishing and he said down on the coast, so I told him he’ll be needing a boat, so we went down to the boating department and I sell him twin engine Chris Craft. Then he said he didn’t think his Honda Civic would pull it, so I took him down to our automotive department and sell him that 4X4 Blazer. I then ask him where he’ll be staying, and since he had no accommodation, I took him to camping department and sell him one of those new igloo 6 sleeper Camper Tents. Then the guy said, while we’re at it, I should throw in about $100 worth of groceries and two cases of beer.

The boss said: ‘You’re not serious? A guy came in hereto buy a fishhook and you sold him a boat, a 4X4 truck and a tent?’

Pinoy boy says: ‘No Sir, actually he came in to buy Tylenol for his headache and I said: ‘Well, fishing is the best way to relax your mind!’

From Totoy Bibo of Kidapawan City