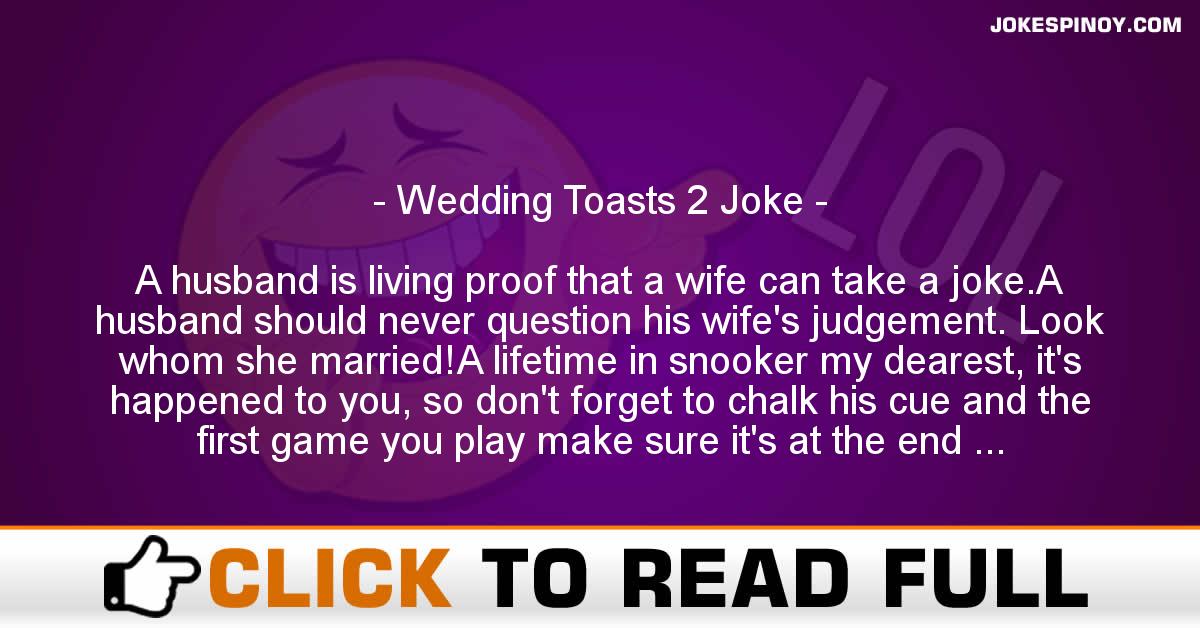 A husband is living proof that a wife can take a joke.A husband should never question his wife’s judgement. Look whom she married!A lifetime in snooker my dearest, it’s happened to you, so don’t forget to chalk his cue and the first game you play make sure it’s at the end of the day.A man is as good as he has to be; a woman as bad as she dares.A man needs a mistress, just to break the monogamy.A wedding is a funeral where a man smells his own flowers.A wedding ring is like a tourniquet; it cuts off your circulation.Advice to submariners: If torpedo overheats, load tube, go deep and eject.Advice to the new bride: You can’t be treated like a doormat if you don’t line down.Advice to the new bride: Never trust a husband too far or a bachelor too near.Two bits of advice to the new bride: One, tell your new husband that you have to have one night a week out with the girls, and, two, don’t waste that night with the girls.After a moment of quite repose It’s tum to tum and toes to toes After a moment of sheer delight It’s back to back for the rest of the night.All marriages are happy; it’s the living together afterward that causes all the problems.All men are born free and equal, but then lots of them grow up and get married.Always talk to your wife while you’re making love…if there’s a phone handy..And the story of the man who called his son Vendetta, because he always had it in for him…And I shall love thee still my dear, until my wife is wise.Anybody who claims that marriage is a fifty-fifty proposition doesn’t know the first thing about women or fractions.As she hears the wedding march, three things are foremost in a bride’s mind: aisle, altar, hymn.As you slide down the bannister of life, may all the marital splinters be pointed in the right direction.Be sure to tie your nightie to your toes, ‘cos you know where the wild goose goes.Before marriage, a man yearns for the woman he loves. After marriage, the ‘Y’ becomes silent.Bride, at wedding: Ever since I was a little girl, I’ve always wanted a prick like my mother’s.Confucius say man who sink into woman’s arms soon have arms in woman’s sink. Confucius say wife for life is better than wife for strife.Congratulations, rots of ruck, sideways is great.Congratulations and best wishes on this very special day. Love Bill and Mary Farkin and the whole farkin family.Congratulations on finding a socket outlet for your plug!Congratulations on the termination of your isolation and may I express an appreciation of your determination to end the desperation and frustration which has caused you so much consternation in giving you the inspiration to make a combination to bring an accumulation to the population.Dear {bride}, Isn’t it funny how history repeats itself? {Age of bride} years ago your mum and dad were putting you to bed with a dummy – and now it’s happening all over again!Did you hear about the scientist whose wife had twins? He baptized one and kept the other as a control.Don’t be too liberal at the country party or you’ll wind up in Labor.Don’t buy your bed from Grace Brothers (Myers); they stand behind everything they sell.