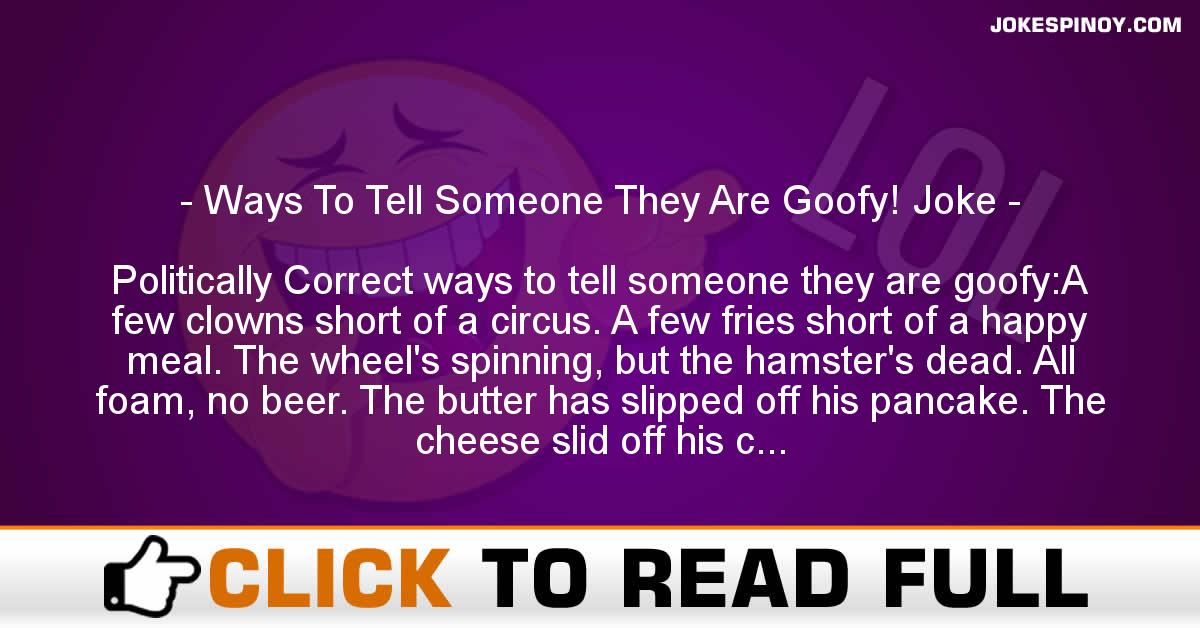 Politically Correct ways to tell someone they are goofy:A few clowns short of a circus. A few fries short of a happy meal. The wheel’s spinning, but the hamster’s dead. All foam, no beer. The butter has slipped off his pancake. The cheese slid off his cracker. Body by Fisher, brains by Mattel. Warning: Objects in mirror are dumber than they appear. Couldn’t pour water out of a boot with instructions on the heel. He fell out of the stupid tree and hit every branch on the way down. As smart as bait. Doesn’t have all his dogs on one leash. Her sewing machine’s out of thread. One fruit loop shy of a full bowl. Her antenna doesn’t pick up all the channels. His belt doesn’t go through all the loops. Proof that evolution CAN go in reverse. Receiver is off the hook. Not wired to code. Skylight leaks a little. Her slinky’s kinked. Too much yardage between the goal posts. Got a full 6-pack, but lacks the plastic thingy to hold them together. A photographic memory, but the lens cover is on. During evolution his ancestors were in the control group. Gates are down, the lights are flashing, but the train isn’t coming. Is so dense, light bends around her. If brains were taxed, he’d get a rebate. Standing close to her, you can hear the ocean. Some drink from the fountain of knowledge, but he just gargled. She stayed on the Tilt-A-Whirl a bit too long.Other funnies…Making fun of born-again Christians is like hunting dairy cows with a high powered rifle and scope.I like pigs. Dogs look up to us. Cats look down on us. Pigs treat us as equals. Everyone has a photographic memory. Some don’t have film. He who laughs last, thinks slowest. A day without sunshine is like, well night. On the other hand, you have different fingers. Change is inevitable, except from a vending machine. Back up my hard drive? How do I put it in reverse? I just got lost in thought. It was unfamiliar territory. When the chips are down, the buffalo is empty. Seen it all, done it all, can’t remember most of it. Those who live by the sword get shot by those who don’t. I feel like I’m diagonally parked in a parallel universe. He’s not dead, he’s electroencephalographically challenged. She’s always late. Her ancestors arrived on the Juneflower.You have the right to remain silent. Anything you say will be misquoted, then used against you.I wonder how much deeper the ocean would be without sponges. Honk if you love peace and quiet. Pardon my driving, I am reloading. Despite the cost of living, have you noticed how it remains so popular? Nothing is fool-proof to a sufficiently talented fool.