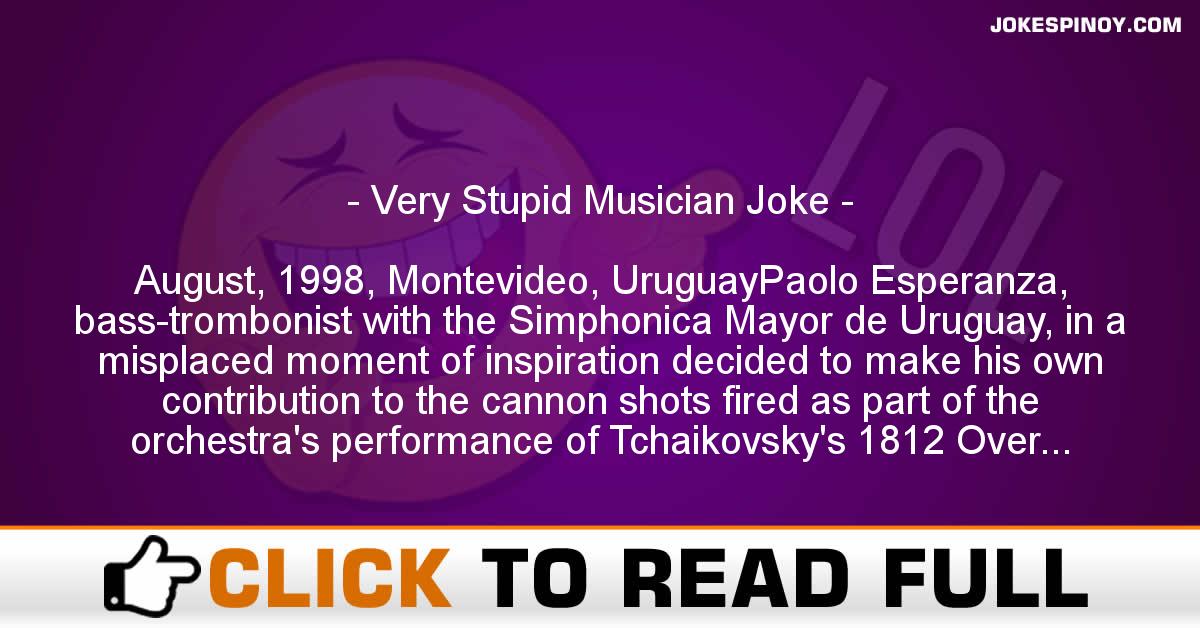 August, 1998, Montevideo, UruguayPaolo Esperanza, bass-trombonist with the Simphonica Mayor de Uruguay, in a misplaced moment of inspiration decided to make his own contribution to the cannon shots fired as part of the orchestra’s performance of Tchaikovsky’s 1812 Overture at an outdoor children’s concert. In complete seriousness he placed a large, ignited firecracker, which was equivalent in strength to a quarter stick of dynamite, into his aluminum straight mute and then stuck the mute into the bell of his quite new Yamaha in-line double-valve bass trombone. Later, from his hospital bed he explained to a reporter through bandages on his mouth, “I thought that the bell of my trombone would shield me from the explosion and, instead, would focus the energy of the blast outward and away from me, propelling the mute high above the orchestra, like a rocket.” However, Paolo was not up on his propulsion physics nor qualified to use high-powered artillery and in his haste to get the horn up before the firecracker went off, he failed to raise the bell of the horn high enough so as to give the mute enough arc to clear the orchestra. What actually happened should serve as a lesson to us all during those delirious moments of divine inspiration. First, because he failed to sufficiently elevate the bell of his horn, the blast propelled the mute between rows of players in the woodwind and viola sections of the orchestra, missing the players and straight into the stomach of the conductor, driving him off the podium and directly into the front row of the audience. Fortunately, the audience were sitting in folding chairs and thus they were protected from serious injury, for the chairs collapsed under them passing the energy of the impact of the flying conductor backwards into row of people sitting behind them, who in turn were driven back into the people in the row behind and so on, like a row of dominos. The sound of collapsing wooden chairs and grunts of people falling on their behinds increased logarithmically, adding to the overall sound of brass cannons and brass playing as constitutes the closing measures of the Overture. Meanwhile, all of this unplanned choreography not withstanding, back on stage Paolo’s Waterloo was still unfolding. According to Paolo, “Just as I heard the sound of the blast, time seemed to stand still. Everything moved in slow motion. Just before I felt searing pain in my mouth, I could swear I heard a voice with a Austrian accent say, “Fur every akshon zer iz un eekvul un opposeet reakshon!” Well, this should come as no surprise, for Paolo had set himself up for a textbook demonstration of this fundamental law of physics. Having failed to plug the lead pipe of his trombone, he allowed the energy of the blast to send a superheated jet of gas backwards through the mouth pipe of the trombone, which exited the mouthpiece, burning his lips and face. The pyrotechnic ballet wasn’t over yet. The force of the blast was so great it split the bell of his shiny Yamaha right down the middle, turning it inside out while at the same time propelling Paolo backwards off the riser. And for the grand finale, as Paolo fell backwards he lost his grip on the slide of the trombone allowing the pressure of the hot gases coursing through the horn to propel the trombone’s slide like a double golden spear into the head of the 3rd clarinetist, knocking him unconscious and fracturing his skull. I would think the moral of this story is, Beware the next time you hear someone in the trombone section yell out, “Hey, y’all, watch this!”