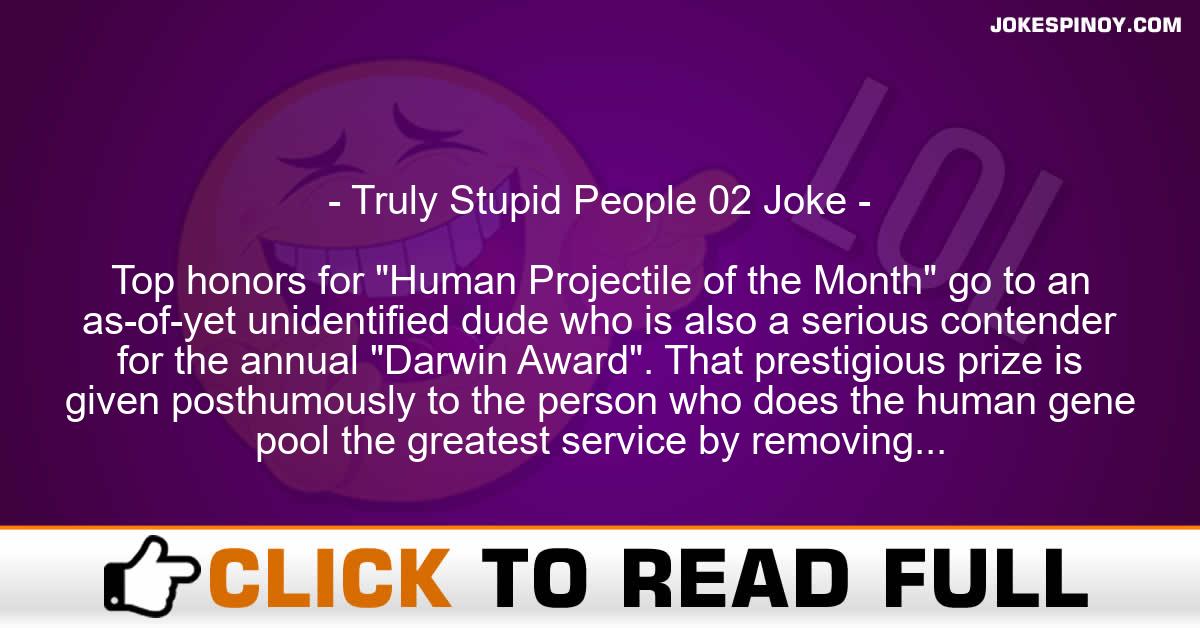 Top honors for “Human Projectile of the Month” go to an as-of-yet unidentified dude who is also a serious contender for the annual “Darwin Award”. That prestigious prize is given posthumously to the person who does the human gene pool the greatest service by removing himself from it in the most extraordinarily stupid fashion. Troopers from the Arizona Highway Patrol got on to this gallant if not brainless form of ballistic research after motorists reported some mysterious scorched and blackened scars on a stretch of deserted highway. The more officers found, the stranger the case got. Here is what they “pieced” together: JATO units are basically huge canisters of solid rocket fuel used to achieve “Jet A*sisted Take Off”, typically lifting big transport planes into the air from short, rough ground runways, or shooting overloaded planes from the decks of aircraft carriers. They were not, repeat NOT, designed to augment the inherent boost factor of a 1967 Chevy Impala. But it is guessed that — let’s call him “Zippy” —- didn’t know that when he hooked one up to his ride. He apparently chose his runway carefully, selecting a nice long, lonely piece of straight highway in good repair. Not guessing that he might need a bit more than five miles of zoom surface, Zippy’s test track had, that far down the track, a gentle rise on a sloping turn. He kicked the tire, lit the fire, ran his Chev up to top cruising speed, and hit the ignition. Investigators know exactly where this happened, judging from the extended patch of burned and melted asphalt. The pocket calculator boys figure Zip reached maximum thrust within 5 seconds, punching the Chevy to “well in excess of 350 miles per hour” and continued at “full burn” for another 20 to 25 seconds. Early in that little sprint, at roughly 2.5 miles down the road, the Human Hydro Shock stood on the brakes, melting them completely, blowing the tires and rapidly reducing all four skins to liquefied trails on the pavement. Remember that little rise on the turn? That’s where Zippy concluded his land speed record attempt and went for airborne honors, ultimately reaching an altitude of 125 feet and still climbing when his flight was abruptly terminated. We’ll never know how far or how high he might have gone. A cliff face of solid rock kind of got in his way, posing a serious reaffirmation of the law of physics vis-a-vis two chunks of matter cannot occupy the same space at the same time. He gave it hell though, blasting a 6-foot crater. The best modern forensic science could do was ID the car’s make and model year. As for Zippy, only trace evidence of bone, teeth, and hair were found in the crater.