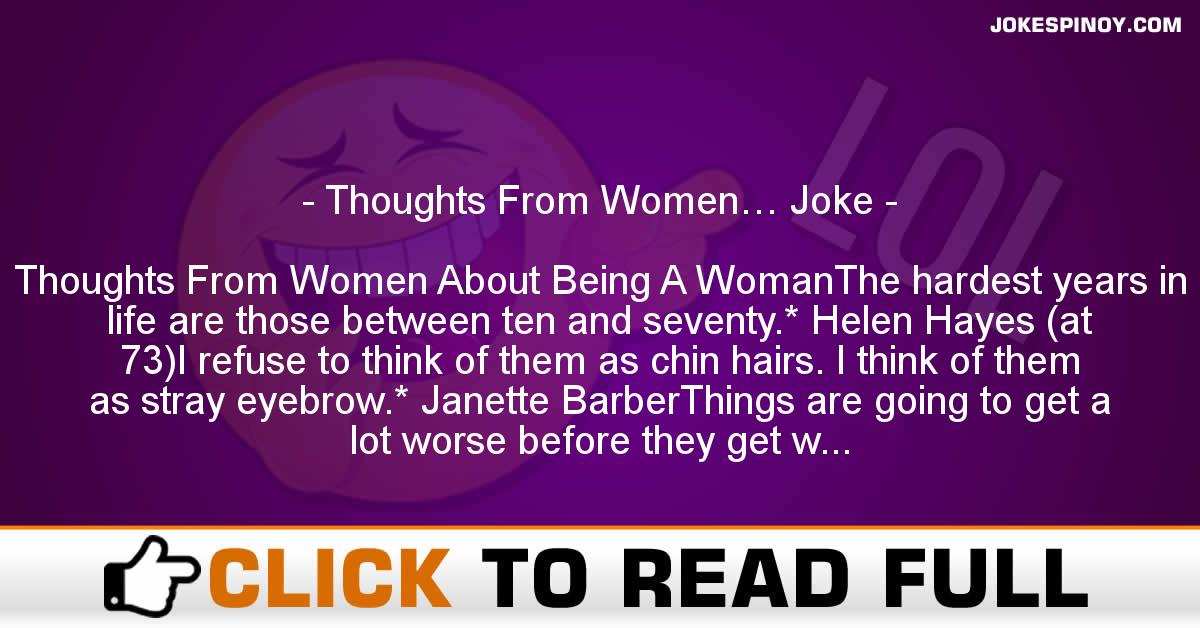 Thoughts From Women About Being A WomanThe hardest years in life are those between ten and seventy.* Helen Hayes (at 73)I refuse to think of them as chin hairs. I think of them as stray eyebrow.* Janette BarberThings are going to get a lot worse before they get worse.* Lily TomlinA male gynecologist is like an auto mechanic who never owned a car.* Carrie SnowOld age ain’t no place for sissies.* Bette DavisIf you can’t be a good example, then you’ll just have to be a horrible warning.* Catherine AirdA man’s got to do what a man’s got to do. A woman must do what he can’t.* Rhonda HansomeThe phrase “working mother” is redundant.* Jane SellmanWhatever women must do they must do twice as well as men to be thought half as good. Luckily, this is not difficult.* Charlotte WhittonThirty-five is when you finally get your head together and your body starts falling apart.* Caryn LeschenWhoever thought up the word “Mammogram”? Every time I hear it, I think I’m supposed to put my breast in an envelope and send it to someone.* Jan KingI try to take one day at a time, but sometimes several days attack me at once.* Jennifer UnlimitedWhen I was young, I was put in a school for retarded kids for two years before they realized I actually had a hearing loss. And they called ME slow!* Kathy BuckleyI’m not offended by all the dumb blonde jokes because I know I’m not dumb and I’m also not blonde.* Dolly PartonYou see a lot of smart guys with dumb women, but you hardly ever see a smart woman with a dumb guy.* Erica JongIf high heels were so wonderful, men would still be wearing them.* Sue GraftonLaugh and the world laughs with you. Cry and you cry with your girlfriends.* Laurie KuslanskyI think – therefore I’m single.* Lizz WinsteadYou know the hardest thing about having cerebral palsy and being a woman? It’s plucking your eyebrows. That’s how I originally got pierced ears.* Geri JewellWhen women are depressed they either eat or go shopping. Men invade another country.* Elayne BooslerBehind every successful man is a surprised woman.* Maryon PearsonIn politics, if you want anything said, ask a man – if you want anything done, ask a woman.* Margaret ThatcherI have yet to hear a man ask for advice on how to combine marriage and a career.* Gloria SteinemI never married because there was no need. I have three pets at home who answer the same purpose as a husband. I have a dog that growls every morning, a parrot that swears all afternoon, and a cat that comes home late every night.* Marie CorelliIf men can run the world, why can’t they stop wearing neckties? How intelligent is it to start the day by tying a noose around your neck?* Linda EllerbeeNobody can make you feel inferior without your permission.* Eleanor Roosevelt