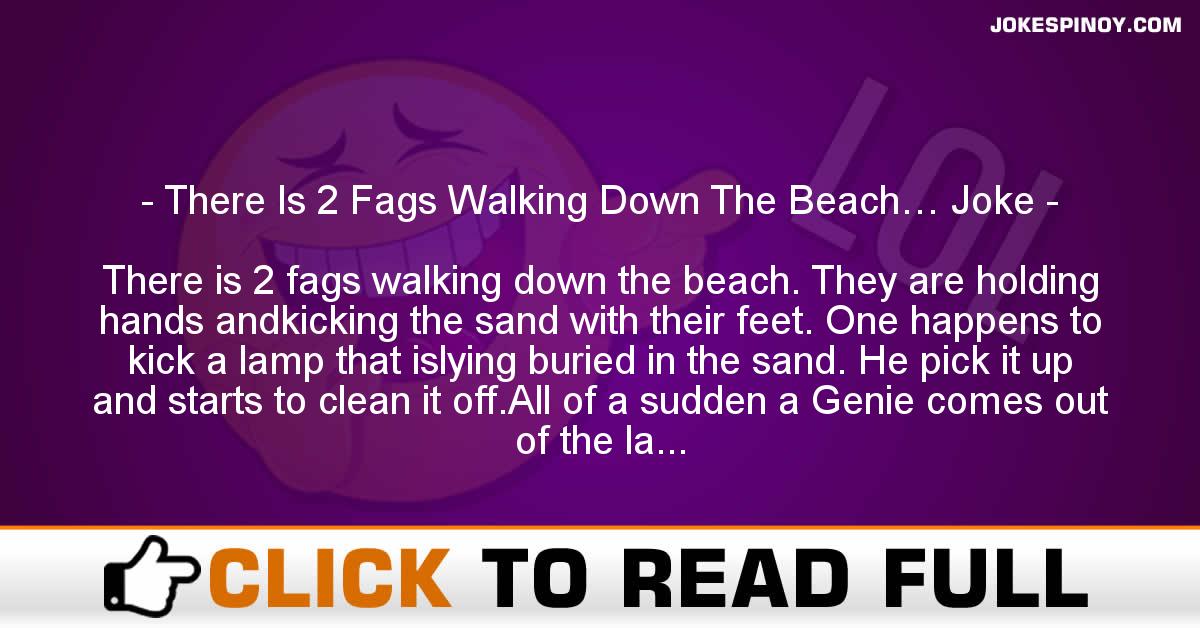 There is 2 fags walking down the beach. They are holding hands andkicking the sand with their feet. One happens to kick a lamp that islying buried in the sand. He pick it up and starts to clean it off.All of a sudden a Genie comes out of the lamp.Genie, ” Man, I don’t believe it. I have stuck in that bottle for 2thousand years and the first person to come along and find me is afag. I am suppose to give you 3 wishes but I just can’t do it. I won’teven give you 2. I will give you one wish and that is it. What will itbe.”The 2 fags are excited about getting their wish but couldn’t come upwith what they wanted to wish for on such short notice.Fag1 says,” Could you give us just a little time to think about it? Imean one wish we need a little time.”The Genie looks down and says, “Alright you can take as long as youwant but I am not going to stay here until you come up with it. I justcan’t stand the sight of you two. Whenever youmake me your mind justwish for it and it will done.”At that moment the Genie grabs his bottle and flys off into the sky.Well the two fags decide that they will go back to the motel room anddecide on what they will wish for. Once they got back their emotionstook over and they starting doing all that fag stuff. Right as they were getting into it, the door of their room gets busteddown and 6 men in white sheets come in. They grab the fags and throw arope around their necks. Fag1 looks at Fag2 and says, ” You know this might be a good time useour wish.”Fag2 says, “I already made it.”Fag1 ” What the hell did you wish for?”Fag2 ” Well, I wish that we were hung like two niggers.”