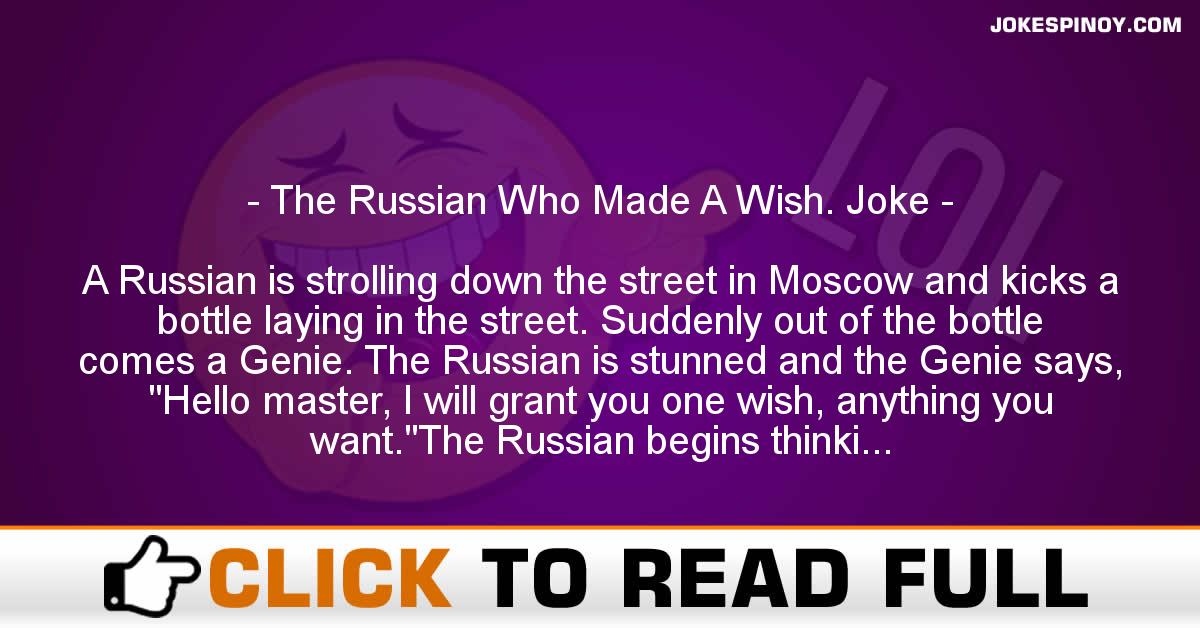 A Russian is strolling down the street in Moscow and kicks a bottle laying in the street. Suddenly out of the bottle comes a Genie. The Russian is stunned and the Genie says, “Hello master, I will grant you one wish, anything you want.”The Russian begins thinking, “Well, I really like drinking vodka.” Finally the Russian says, “I wish to drink vodka whenever I want,so make me piss vodka.”The Genie grants him his wish. When the Russian gets home he gets a gla*s out of the cupboard and pisses in it. He looks in the gla*s and it’s clear. Looks like vodka. Then he smells the liquid. Smells like vodka. So he takes a taste and it is the best vodka he has ever tasted.The Russian yells to his wife, “Natasha, Natasha, come quickly!” She comes running down the hall and the Russian takes another gla*s out of the cupboard and pisses into it. He tells her to drink, it is vodka. Natasha is reluctant but goes ahead and takes a sip. It is the best vodka she has ever tasted. The two drink and party all night.The next night the Russian comes home from work and tells his wife to get two gla*ses out of the cupboard. He proceeds to piss in the two gla*ses. The result is the same, the vodka is excellent and the couple drink until the sun comes up.Finally Friday night comes and the Russian comes home and tells his wife, “Natasha grab one gla*s from the cupboard and we will drink vodka. “His wife gets the gla*s from the cupboard and sets it on the table.The Russian begins to piss in the gla*s and when he fills it his wife asks him, “But Boris, why do we need only one gla*s?”Boris raises the gla*s and says, “Because tonight, my love, you drink from the bottle!”