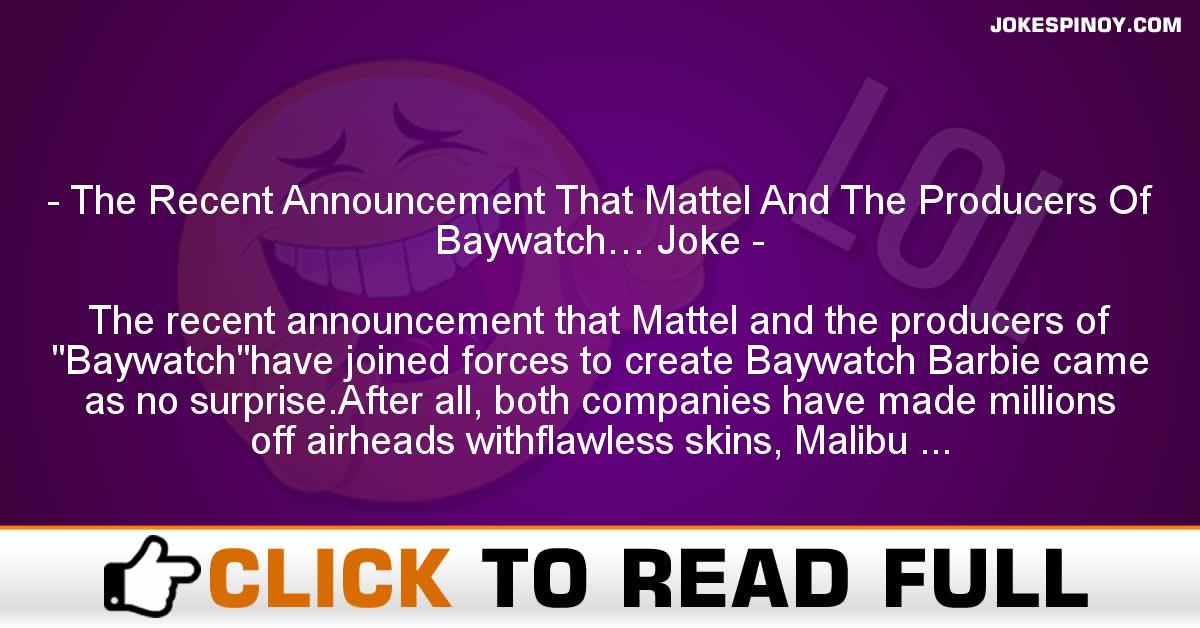 The recent announcement that Mattel and the producers of “Baywatch”have joined forces to create Baywatch Barbie came as no surprise.After all, both companies have made millions off airheads withflawless skins, Malibu tans, and synthetic breasts.If Baywatch Barbie sells well, other Barbie/TV tie-ins seem certainto follow. Some possibilities:Melrose Place Barbie: Comes complete with her Barbie Dream Apartment,where Skipper and the rest of the gang live rent-free. Other accessoriesinclude a bottle of vodka, silk sheets and an arrest warrant.Dr. Barbie, Medicine Woman: This helpful doll offers other homesteadersimportant tips like what conditioner to use out on the Plains and how totake care of their nails while shoeing a horse.America’s Most Wanted Barbie: She’s on the run after 30 years of crimeagainst feminism.Oprah Barbie: Push a button on her back and this Barbie actually speaks!Hold your very own talk show with topics like how tough math cla*s is,Ballerina Barbie’s struggle with bulimia, and Kens who wear Barbie’s clothes.My So-Called Barbie: She faces the same troubling issues as regular teens whodon’t have huge wardrobes, pools, ponies, and perfect bods.Roseanne Barbie: The dark side of the American dream is explored with this doll,which shows what happened after Barbie graduated from high school, married tooyoung and ate too much.Murder, Barbie Wrote: Whenever this elder stateswoman of the Barbie set (she’s 27!)arrives in the playhouse, all the other dolls mysteriously disappear.