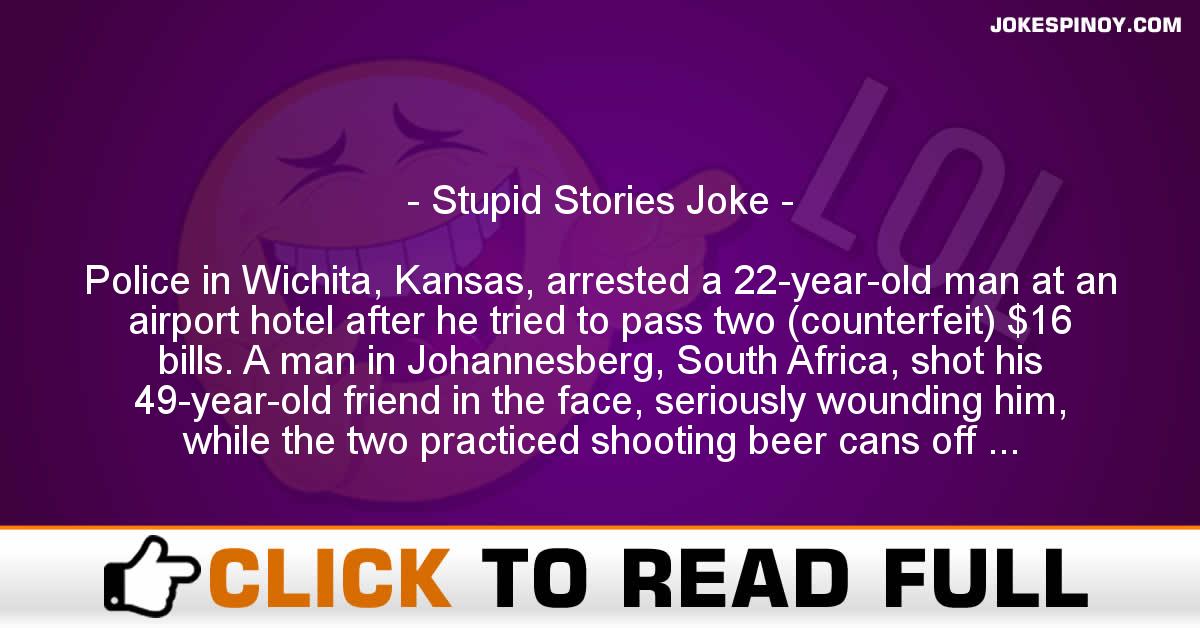 Police in Wichita, Kansas, arrested a 22-year-old man at an airport hotel after he tried to pa*s two (counterfeit) $16 bills. A man in Johannesberg, South Africa, shot his 49-year-old friend in the face, seriously wounding him, while the two practiced shooting beer cans off each other’s head. A company trying to continue its five-year perfect safety record showed its workers a film aimed at encouraging the use of safety goggles on the job. According to Industrial Machinery News, the film’s depiction of gory industrial accidents was so graphic that twenty-five workers suffered minor injuries in their rush to leave the screening room. Thirteen others fainted, and one man required seven stitches after he cut his head falling off a chair while watching the film. The Chico, California, City Council enacted a ban on nuclear weapons, setting a $500 fine for anyone detonating one within city limits. A bus carrying five pa*sengers was hit by a car in St. Louis, but by the time police arrived on the scene, fourteen pedestrians had boarded the bus and had begun to complain of whiplash injuries and back pain. Swedish business consultant Ulf af Trolle labored 13 years on a book about Swedish economic solutions. He took the 250-page manuscript to be copied, only to have it reduced to 50,000 strips of paper in seconds when a worker confused the copier with the shredder. A convict broke out of jail in Washington D.C., then a few days later accompanied his girlfriend to her trial for robbery. At lunch, he went out for a sandwich. She needed to see him, and thus had him paged. Police officers recognized his name and arrested him as he returned to the courthouse in a car he had stolen over the lunch hour. Police in Radnor, Pennsylvania, interrogated a suspect by placing a metal colander on his head and connecting it with wires to a photocopy machine. The message “He’s lying” was placed in the copier, and police pressed the copy button each time they thought the suspect wasn’t telling the truth. Believing the “lie detector” was working, the suspect confessed. When two service station attendants in Ionia, Michigan, refused to hand over the cash to an intoxicated robber, the man threatened to call the police. They still refused, so the robber called the police and was arrested. A Los Angeles man who later said he was “tired of walking,” stole a steamroller and led police on a 5 mph chase until an officer stepped aboard and brought the vehicle to a stop.