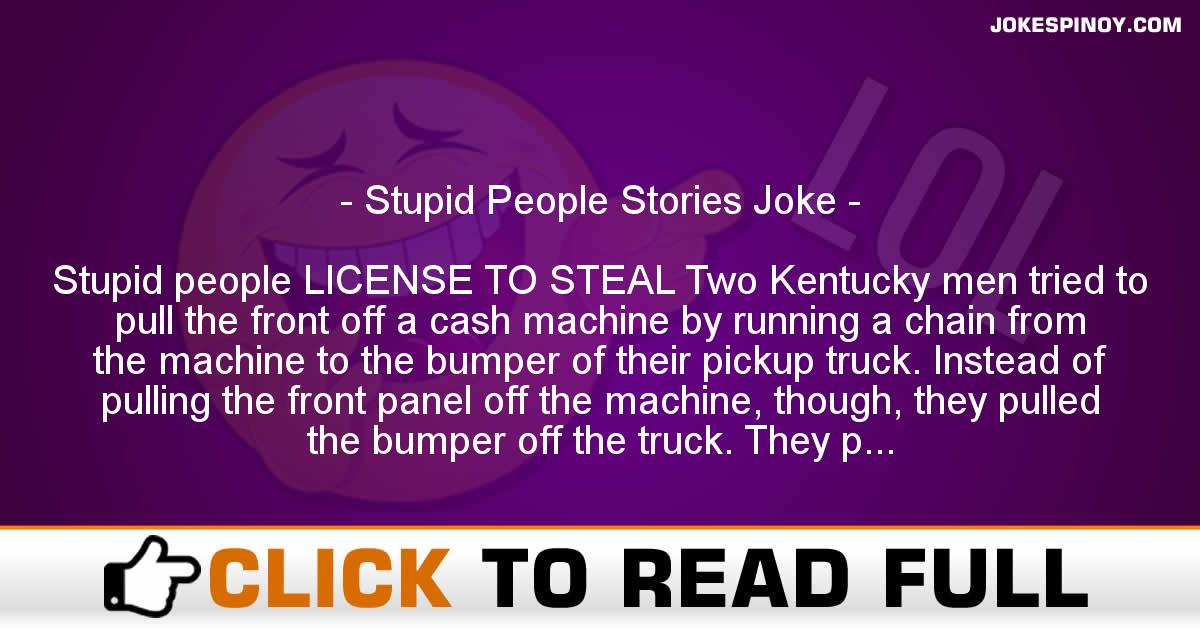 Stupid people LICENSE TO STEAL Two Kentucky men tried to pull the front off a cash machine by running a chain from the machine to the bumper of their pickup truck. Instead of pulling the front panel off the machine, though, they pulled the bumper off the truck. They panicked and fled, leaving the chain still attached to the machine, their bumper still attached to the chain, and their license plate still attached to the bumper. IN THE BAG A “tourist,” supposedly on a golf holiday, stood in line at the customs counter. While making idle chatter, the customs official thought it odd that the golfer didn’t know what a handicap was. The officer then asked the tourist to demonstrate his swing. He did – backwards. A substantial amount of narcotics was found in the golf bag. MADE FOR TV Guns For Hire, an Arizona company specializing in staged gunfights for Western movies, got a call from a 47-year-old woman who wanted to have her husband shot. She was sentenced to four years in jail. DO YOU ACCEPT CREDIT CARDS? A Texan convicted of robbery worked out a deal to pay $9600 in damages rather than serve a two-year prison sentence. For payment, he provided the court a forged check. He got his prison term back, plus eight more years. YOU MEAN ME? A pair of Michigan robbers entered a record shop nervously waving revolvers. The first one shouted, “Nobody move!” When his partner moved, the startled first bandit shot him