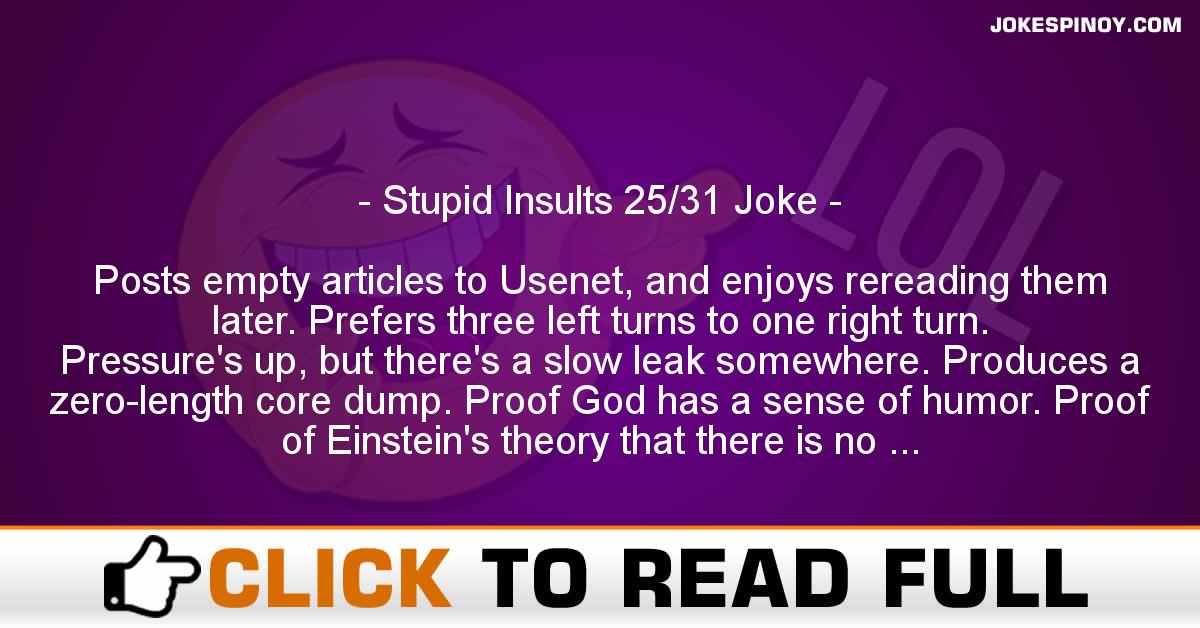 Posts empty articles to Usenet, and enjoys rereading them later. Prefers three left turns to one right turn. Pressure’s up, but there’s a slow leak somewhere. Produces a zero-length core dump. Proof God has a sense of humor. Proof of Einstein’s theory that there is no limit to human stupidity. Proof that evolution CAN go in reverse. Put a lens in each ear and you’ve got a telescope. Puts a finger in his ear so the draft through his head isn’t annoying. Putting his brain on the edge of a razor blade would be like putting a pea on a six lane highway. Qualifies for the mental express line — five thoughts or less. — MacNelly Quotes entire letters/articles as responses and hides her one line of wisdom in the middle. Racing fifty yards with a pregnant woman, he’d come in third. Reading from an empty/blank/unformatted disk. Reads her newspaper back-to-front. Reads Homer in the original Greek, but doesn’t know Greek. Ready to check in at the HaHa Hilton. Ready to join the Anti-Mensa Society. Receiver is off the hook. Relatively three-dimensional, as fictional characters go. Renewable energy source for hot air balloons. Reposts this list when someone asks for it, but it’s an old copy. Reset line is glitching. Result of a first cousin marriage. Result of God’s experiments to see if humans can function without a brain. Room for rent, unfurnished. RS232C brain with a DIN connector. Running at 300 baud. Running on a 286. Running open. (Old mechanical teletype term.)