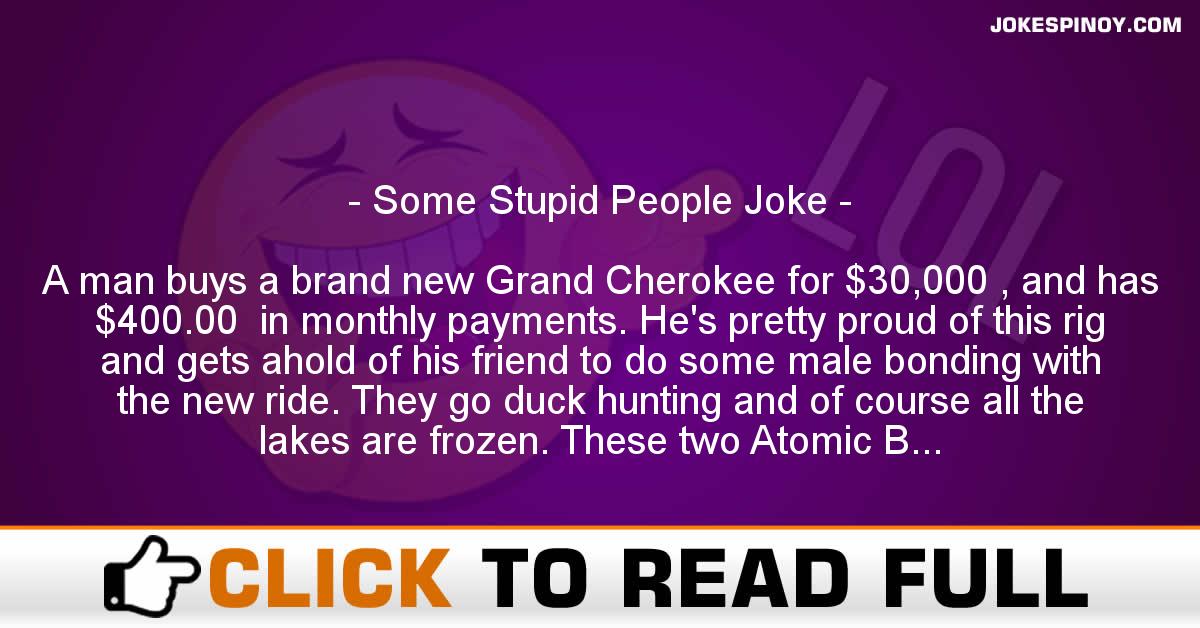 A man buys a brand new Grand Cherokee for $30,000+, and has $400.00+ in monthly payments. He’s pretty proud of this rig and gets ahold of his friend to do some male bonding with the new ride. They go duck hunting and of course all the lakes are frozen. These two Atomic Brains go to the lake with their guns, the dog, the beer and of course the new vehicle. They drive out onto the ice. Now, they want to make some kind of a natural landing area to attract ducks – something the decoys will float on. Remember it’s all ice, and in order to make a hole large enough to interest a flock of ducks – a hole big enough to entice ducks to land, they needed to use a little more than an ice hole drill… Sooo, out of the back of the brand-new Jeep Grand Cherokee comes a stick of dynamite with a short 40-second fuse. Now to their credit, these two rocket scientists DID take into consideration that if they placed the stick of dynamite on the ice at a location far from where they (and the new Grand Cherokee) would be waiting and ran back quickly, they would risk slipping on the ice as they ran from the imminent explosion and could possibly go up in smoke with the resulting blast. After a little deliberation, they come up with lighting and THROWING the dynamite, which is what they end up doing. Remember a couple of paragraphs back when I mentioned the vehicle, the beer, the guns AND THE DOG???? Yes, the dog. The driver’s pet Black Lab (used for retrieving – especially things thrown by the owner). You guessed it, the dog takes off at a high rate of doggy speed on the ice, reaching the stick of dynamite with the burning 40-second fuse about the time it hits the ice – all to the woe of the two idiots which are now yelling, stomping, waving arms and wondering what the hell to do now… The dog is happy and now heads back toward the “hunters” with the stick of dynamite. I think we all can picture the ever-increasing concern on the part of the brain trust, as the loyal Labrador Retriever approaches. The Bozos now are REALLY waving their arms – yelling even louder and generally feeling kinda panicked… Now finally one of the guys decides to think – something that neither had done before this moment, grabs a shotgun and shoots the dog. This sounds better than it really is, because the shotgun was loaded with #8 duck shot and hardly effective enough to stop a Black Lab. The dog DID stop for a moment, slightly confused, but then continued on. Another shot, and this time the dog – still standing, became REALLY confused & of course scared…Thinking that these two Nobel Prize Winners have gone TOTALLY INSANE, the pooch takes off to find cover with a now extremely short fuse still burning on the stick of dynamite. The cover the dogs finds? Underneath the brand new Grand Cherokee worth 30-some thousand dollars the $400.00+ monthly payment vehicle that is sitting nearby on the lake ice. BOOM! Dog dies, vehicle sinks to bottom of lake, and these two “Co-Leaders of the Known Universe” are left standing there with this “I can’t EVEN believe this happened to me” look on their faces. Later, the owner of the vehicle calls his insurance company and is promptly informed that sinking a vehicle in a lake by illegal use of explosives is NOT covered on his policy…He had yet to make his first car payment.