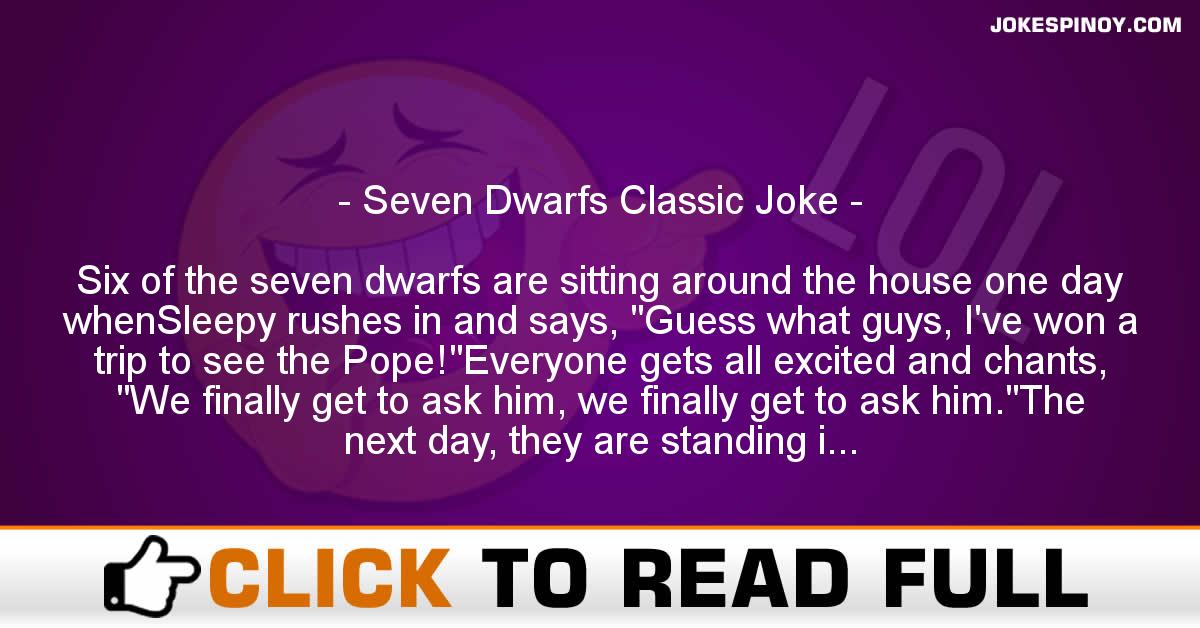 Six of the seven dwarfs are sitting around the house one day whenSleepy rushes in and says, “Guess what guys, I’ve won a trip to see the Pope!”Everyone gets all excited and chants, “We finally get to ask him, we finally get to ask him.”The next day, they are standing in front of the Pope, Dopey out in front of the other six. All the other six start pushing Dopey and saying, “Go ahead, Dopey, ask him, ask him!”The Pope looks at Dopey and asks, “Do you have a question to ask me, young man?”Dopey looks up shyly and says, “Well, yes.”The Pope tells him to go ahead and ask.Dopey asks, “Well, do….do they have nuns in Alaska?”The Pope replies, “Well, yes, I’m sure we have nuns in Alaska.”The others all keep nudging Dopey and chanting, “Ask him the rest, Dopey, ask him the rest!”The Pope asks Dopey if there’s more to his question, and Dopey continues, “Well, uh, do they have, uh, black nuns in Alaska?”To which the Pope replies, “Well, my son, I think there must be a few black nuns in Alaska, yes.”Still not satisfied, the others keep saying, “Ask him the last part, Dopey, ask him the last part!”The Pope asks Dopey, “Is there still more to your question?”To which Dopey replies, “Well, uh, yeah…..are there, uh, are there any midget black nuns in Alaska?”The startled Pope replies, “Well, no, my son, I really don’t think there are any midget black nuns in Alaska.”At this, Dopey turns all kinds of colors, and the others start laughing, and yelling…”Dopey screwed a penguin, Dopey screwed a penguin!”