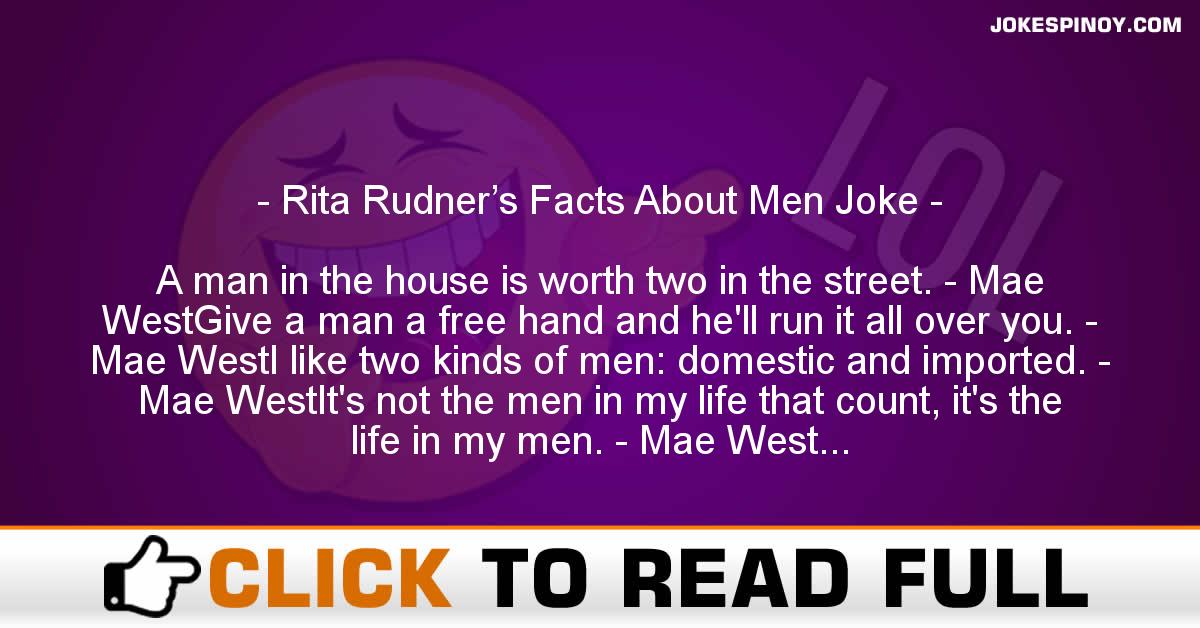 A man in the house is worth two in the street. – Mae WestGive a man a free hand and he’ll run it all over you. – Mae WestI like two kinds of men: domestic and imported. – Mae WestIt’s not the men in my life that count, it’s the life in my men. – Mae WestMen become old, but they never become good. – Oscar WildeA bachelor is a cagey guy and has a load of fun; he sizes all the cuties up and never Mrs. One.Adam was created first to give him a chance to say something.Before money was invented, what did women find attractive about men?Boy will be boys but one day all girls will be women. Boys will be boys, but men are better at it.Men are like toilets. Either vacant, engaged, or full of crap.A woman needs a man like a fish needs a bicycle.Few women admit their age. Few men act theirs.Men…give them an inch…and they add it to their own.I called my last boyfriend “Miller Lite”; tasted good, but wasn’t very filling.If men could get pregnant, abortion would be a sacrament.If only women came with pull-down menus and online help.If they can put a man on the moon, then why can’t they just put them all there.Men are like dog turds; the older they get, the easier they are to pick up.Men piss like cheap cameras; they just aim and shoot.Most men prefer looks to brains, because most men see better than they think.Never hit a man with gla*ses. Hit him with a baseball bat.90% of the men give the other 10% a bad name.Nowadays, the only place a single woman can find the best man is at a wedding.PMS is something that makes a woman act once a month like a man acts EVERY DAY.The guy who said all men are created equal never went to a nudist colony.Women sometimes make fools of men, but most guys are the do-it-yourself type.