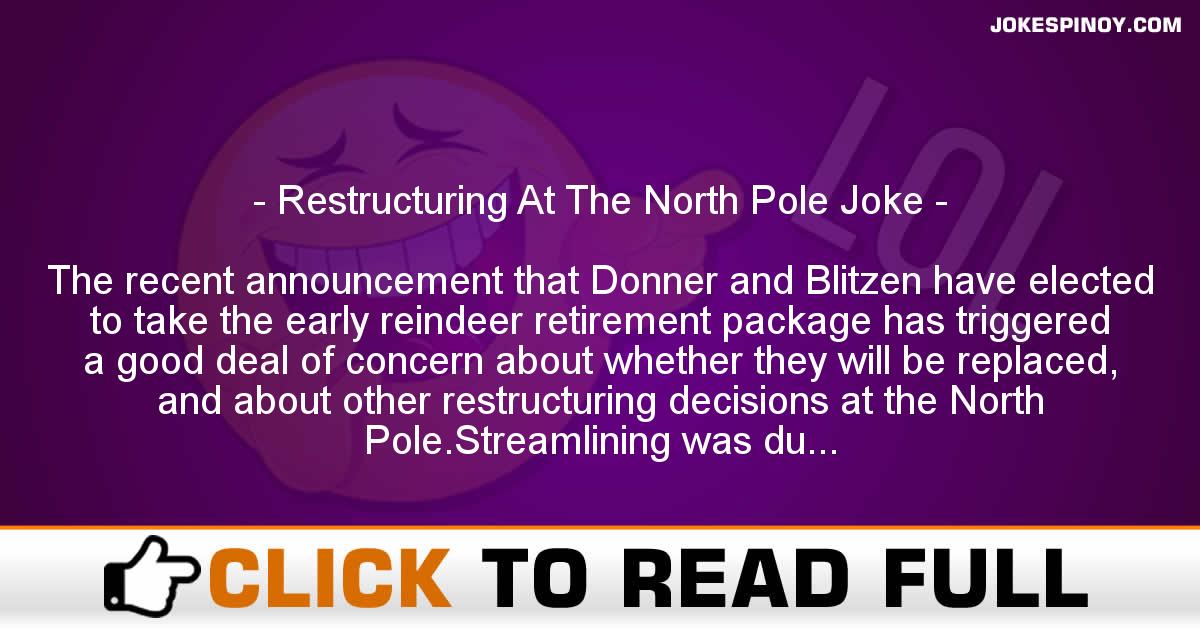 The recent announcement that Donner and Blitzen have elected to take the early reindeer retirement package has triggered a good deal of concern about whether they will be replaced, and about other restructuring decisions at the North Pole.Streamlining was due to the North Pole’s loss of dominance of the season’s gift distribution business. Home shopping channels and mail order catalogues have diminished Santa’s market share. He could not sit idly by and permit further erosion of the profit picture.The reindeer downsizing was made possible through the purchase of a late model Japanese sled for the CEO’s annual trip. Improved productivity from Dasher and Dancer, who summered at the Harvard Business School, is anticipated. Reduction in reindeer will also lessen airborne environmental emissions for which the North Pole has received unfavorable press.I am pleased to inform you that Rudolph’s role will not be disturbed. Tradition still counts for something at the North Pole. Management denies, in the strongest possible language, the earlier leak that Rudolph’s nose got that way, not from the cold, but from substance abuse. Calling Rudolph “a lush who was into the sauce and never did pull his share of the load” was an unfortunate comment, made by one of Santa’s helpers and taken out of context at a time of year when he is known to be under executive stress.As a further restructuring, today’s global challenges require the North Pole to continue to look for better, more compet**ive steps. Effective immediately, the following economy measures are to take place in the “Twelve Days of Christmas” subsidiary:- The partridge will be retained, but the pear tree never turned out to be the cash crop forecasted. It will be replaced by a plastic hanging plant, providing considerable savings in maintenance;- The two turtle doves represent a redundancy that is simply not cost effective. In addition, their romance during working hours could not be condoned. The positions are therefore eliminated;- The three French hens will remain intact. After all, everyone loves the French;- The four calling birds were replaced by an automated voice mail system, with a call waiting option. An analysis is underway to determine who the birds have been calling, how often and how long they talked;- The five golden rings have been put on hold by the Board of Directors. Maintaining a portfolio based on one commodity could have negative implications for institutional investors. Diversification into other precious metals as well as a mix of T-Bills and high technology stocks appear to be in order;- The six geese-a-laying constitutes a luxury which can no longer be afforded. It has long been felt that the production rate of one egg per goose per day is an example of the decline in productivity. Three geese will be let go, and an upgrading in the selection procedure by personnel will a*sure management that from now on every goose it gets will be a good one;- The seven swans-a-swimming is obviously a number chosen in better times. The function is primarily decorative. Mechanical swans are on order. The current swans will be retrained to learn some new strokes and therefore enhance their outplacement;- As you know, the eight maids-a-milking concept has been under heavy scrutiny by the EEOC. A male/female balance in the workforce is being sought. The more militant maids consider this a dead-end job with no upward mobility. Automation of the process may permit the maids to try a-mending, a-mentoring or a-mulching;- Nine ladies dancing has always been an odd number. This function will be phased out as these individuals grow older and can no longer do the steps;- Ten Lords-a-leaping is overkill. The high cost of Lords plus the expense of international air travel prompted the Compensation Committee to suggest replacing this group with ten out-of-work congressmen. While leaping ability may be somewhat sacrificed, the savings are significant because we expect an oversupply of unemployed congressmen this year;- Eleven pipers piping and twelve drummers drumming is a simple case of the band getting too big. A substitution with a string quartet, a cutback on new music and no uniforms will produce savings which will drop right down to the bottom line;We can expect a substantial reduction in a*sorted people, fowl, animals and other expenses. Though incomplete, studies indicate that stretching deliveries over twelve days is inefficient. If we can drop ship in one day, service levels will be improved. Regarding the lawsuit filed by the attorney’s a*sociation seeking expansion to include the legal profession (“thirteen lawyers-a-suing”) action is pending.Lastly, it is not beyond consideration that deeper cuts may be necessary in the future to stay compet**ive. should that happen, the Board will request management to scrutinize the Snow White Division to see if seven dwarfs is the right number.*Happy Holidays!*