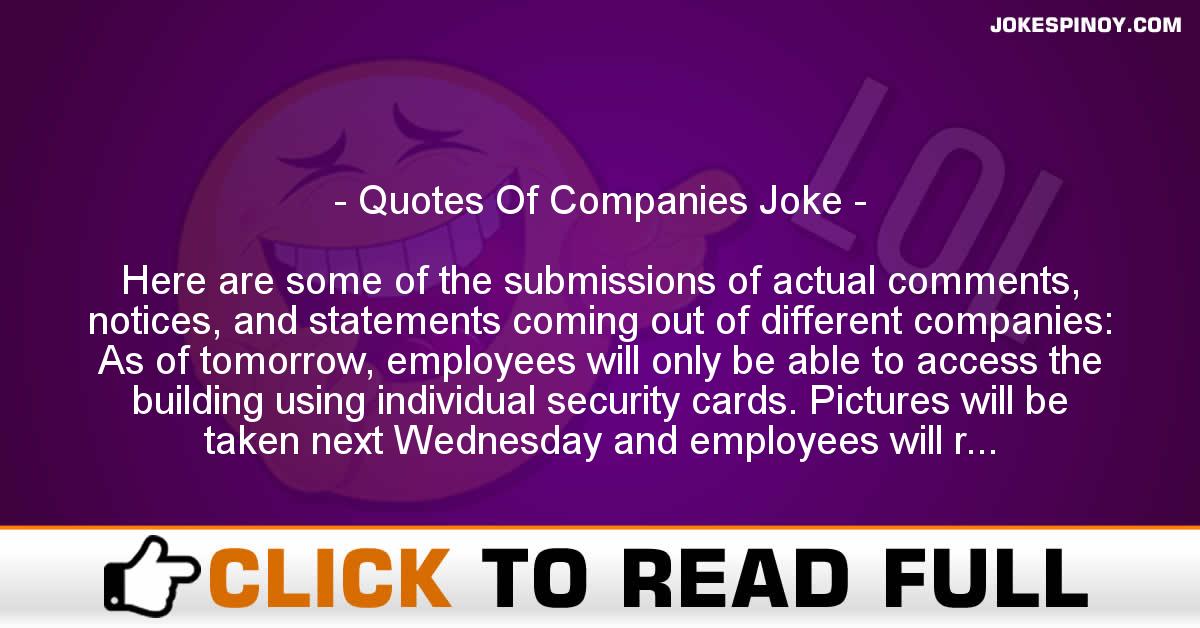 Here are some of the submissions of actual comments, notices, and statements coming out of different companies: As of tomorrow, employees will only be able to access the building using individual security cards. Pictures will be taken next Wednesday and employees will receive their cards in two weeks. (This was the winning entry; Fred Dales at Microsoft Corporation ) What I need is a list of specific unknown problems we will encounter. (Lykes Lines Shipping) How long is this Beta guy going to keep testing our stuff? (Programming intern, Microsoft IIS Development team) E-mail is not to be used to pa*s on information or data. It should be used only for company business. (Accounting Mgr., Electric Boat Company) This project is so important, we can’t let things that are more important interfere with it. (Advertising/Mktg. Mgr., UPS) Doing it right is no excuse for not meeting the schedule. No one will believe you solved this problem in one day! We’ve been working on it for months. Now, go act busy for a few weeks and I’ll let you know when it’s time to tell them.(R&D Supervisor, Minnesota Mining & Manufacturing/3M Corp.) My boss spent the entire weekend retyping a 25-page proposal that only needed corrections. She claims the disk I gave her was damaged and she couldn’t edit it. The disk I gave her was write-protected. (CIO of Dell Computers) Quote from the boss: “Teamwork is a lot of people doing what ‘I’ say.” (Mktg. executive, Citrix Corporation) My sister pa*sed away and her funeral was scheduled for Monday. When I told my boss, he said she died so that I would have to miss work on the busiest day of the year. He then asked if we could change her burial to Friday. He said,”That would be better for me.” (Shipping Executive, FTD Florists) We know that communication is a problem, but the company is not going to discuss it with the employees. (AT&T Lone Lines Division) We recently received a memo from senior management saying, This is to inform you that a memo will be issued today regarding the subject mentioned above.” (Microsoft, Legal Affairs Division) One day my boss asked me to submit a status report to him concerning a project I was working on. I asked him if tomorrow would be soon enough. He said, “If I wanted it tomorrow, I would have waited until tomorrow to ask for it!” (New Business Mgr., Hallmark Cards) As director of communications, I was asked to prepare a memo reviewing our company’s training programs and materials. In the body of the memo one of the sentences mentioned the “pedagogical approach” used by one of the training manuals. The day after I routed the memo to the executive committee, I was called into the HR Director’s office, and was told that the executive VP wanted me out of the building by lunch. When I asked why, I was told that she wouldn’t stand for “perverts” (pedophiles?) working in her company. Finally he showed me her copy of the memo, with her demand that I be fired, with the word “pedagogical” circled in red. The HR Manager was fairly reasonable, and once he looked the word up in his dictionary and made a copy of the definition to send to my boss, he told me not to worry. He would take care of it. Two days later a memo to the entire staff came out, directing us that no words which could not be found in the local Sunday newspaper could be used in company memos. A month later, I resigned. In accordance with company policy, I created my resignation letter by pasting words together from the Sunday paper. (Taco Bell Corporation)