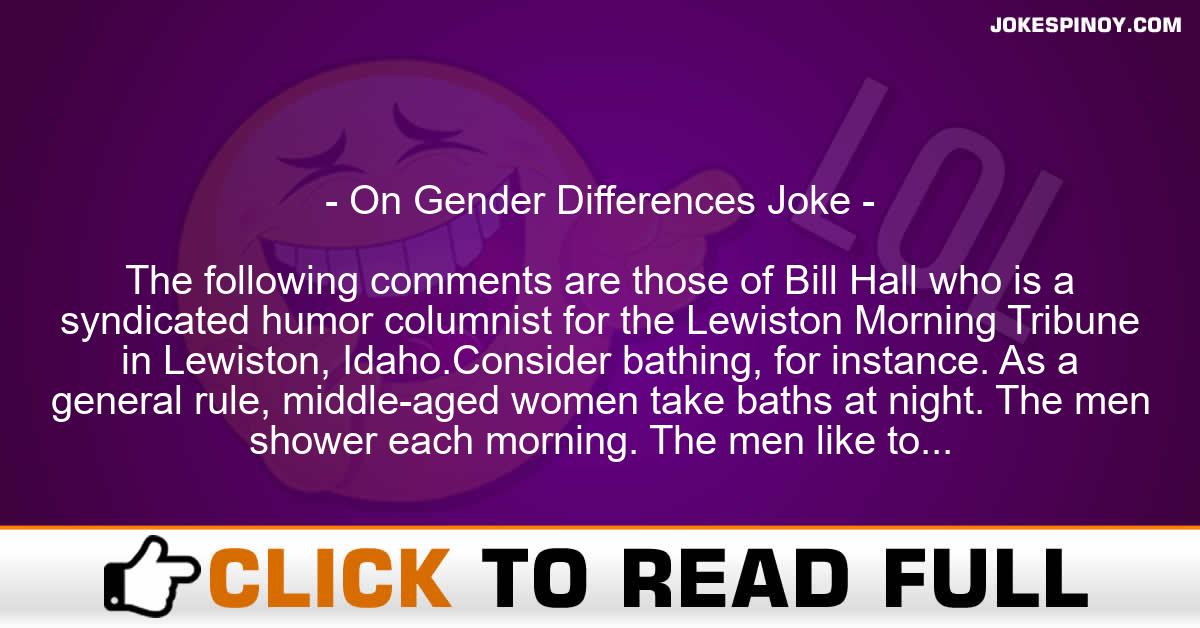 The following comments are those of Bill Hall who is a syndicated humor columnist for the Lewiston Morning Tribune in Lewiston, Idaho.Consider bathing, for instance. As a general rule, middle-aged women take baths at night. The men shower each morning. The men like to go to bed dirty and go to work clean. Women prefer to go to bed clean and to work dirty. That’s why men usually take their coffee breaks with other men.Women read more boring magazines than men. They read silly, pedestrian magazines filled with articles on making quilts, turning bleach bottles into stunning centerpieces, the use of orange eyeshadow and how to get men to shower before going to bed instead of before going to work.Men read sensible, intellectual journals on how to catch fish and kill little animals.When a man cooks, he keeps his knives sharp. Most female cooks don’t. Indeed, most female cooks don’t even own a decent kitchen knife, let alone a sharp one.Female cooks offer the excuse that they would cut themselves if they had a sharp knife. And anyone with knives that lousy probably would.There is another difference between male and female cooks. Female cooks generally cook better with dull knives than male cooks do with sharp knives. That’s how infuriating female cooks can be.Most women in my age group wear dresses occasionally. Only a few of my male friends do and then only in the privacy of their own homes.The women hobble around on high-heeled shoes. Most men would never do anything that silly. In fact, there is a name for the kind of men who wear high heels. They are called cowboys.Women laugh at men for wearing neckties and coats on 100-degree summer days. They snicker at men for wearing more clothes than necessary in hot weather. However, the women who do that are sweating in their pantyhose.Most women in my age group wear make-up. Very few of the men do. There is a name for men who wear make-up. They are called weird cowboys.Women are far more likely to be lousy tippers in restaurants, and to complain thereafter that men always get better service than they do.Women fold their underwear. Most men merely stuff their underwear into the drawer. Men use the time they save to catch fish and kill little animals.Most women, when lost, will stop and ask directions. Most men in my age group believe admitting you’re lost will cast doubt on your manhood. That’s why so many macho men are lost. Smarter men prove their manhood by stopping and asking women for directions, even when they aren’t lost.There is another big difference between men and women in my age group. A competent man tends to rise through the ranks so easily that he eventually reaches a level where he is incompetent. Dr. Laurence J. Peter has dubbed this process the Peter Principle.Women in my age group tend to be held below the level of their competence, making them embarrassing to work with because they tend to outshine male colleagues at the same level.This is known as the Pain-in-the-Neck Principle. Incompetent men who have been subjected to that humiliation retaliate by refusing to promote women. And rightly so. You don’t want people in the board room who don’t shower each morning.