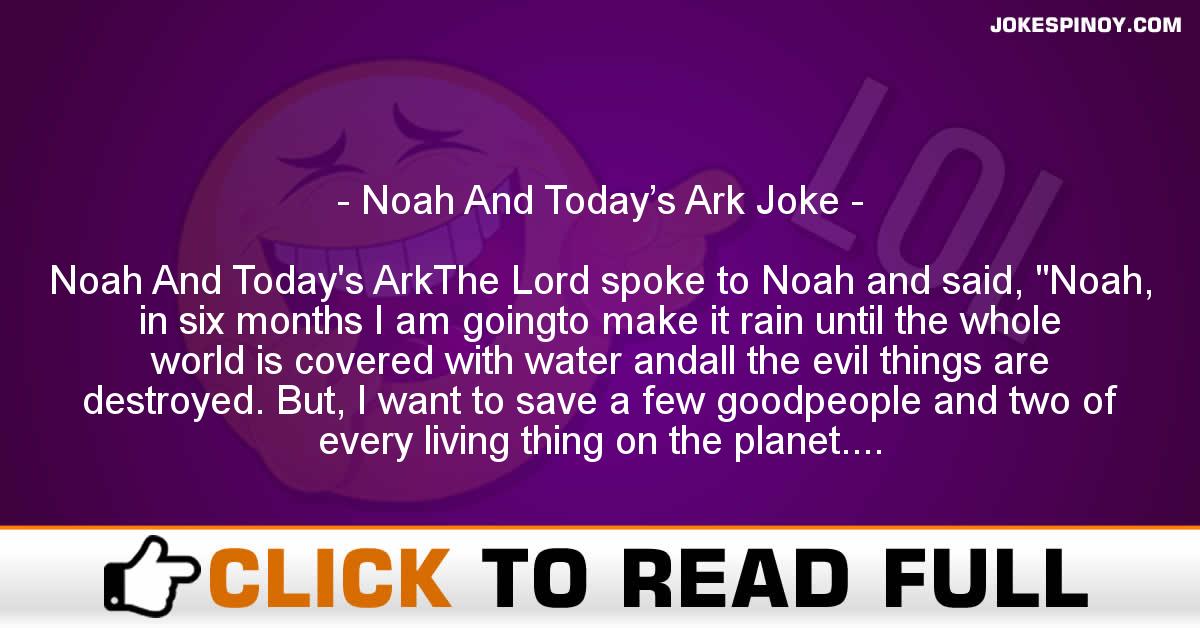 Noah And Today’s ArkThe Lord spoke to Noah and said, “Noah, in six months I am goingto make it rain until the whole world is covered with water andall the evil things are destroyed. But, I want to save a few goodpeople and two of every living thing on the planet. I am orderingyou to build an ark.” And, in a flash of lightning, he deliveredthe specifications for the ark.”OK,” Noah said, trembling with fear and fumbling with theblueprints, “I’m your man.””Six months and it starts to rain,” thundered the Lord. “Youbetter have my ark completed or learn to swim for a long, longtime!”Six months pa*sed, the sky began to cloud up, and the rain beganto fall in torrents. The Lord looked down and saw Noah sitting inhis yard, weeping, and there was no ark.”Noah!” shouted the Lord, “where is My ark?” A lightning boltcrashed into the ground right beside Noah.”Lord, please forgive me!” begged Noah. “I did my best, but therewere some big problems. First, I had to get a building permit forthe ark’s construction, but your plans did not meet their code.So, I had to hire an engineer to redo the plans, only to get intoa long argument with him about whether to include afire-sprinkler system.””My neighbors objected, claiming that I was violating zoningordinances by building the ark in my front yard, so I had to geta variance from the city planning board.””Then, I had a big problem getting enough wood for the ark,because there was a ban on cutting trees to save the spotted owl.I tried to convince the environmentalists and the U.S. Fish andWildlife Service that I needed the wood to save the owls, butthey wouldn’t let me catch them, so no owls.””Next, I started gathering up the animals but got sued by ananimal rights group that objected to me taking along only two ofeach kind.””Just when the suit got dismissed, the EPA notified me that Icouldn’t complete the ark without filing an environmental impactstatement on your proposed flood. They didn’t take kindly to theidea that they had no jurisdiction over the conduct of a SupremeBeing.””Then, the Corps of Engineers wanted a map of the proposed floodplan. I sent them a globe!””Right now, I’m still trying to resolve a complaint with theEqual Opportunities Commission over how many minorities I’msupposed to hire.””The IRS has seized all my a*sets claiming that I am trying toleave the country, and I just got a notice from the state that Iowe some kind of use tax. Really, I don’t think I can finish theark in less than five years.”With that, the sky cleared, the sun began to shine, and a rainbowarched across the sky.Noah looked up and smiled. “You mean you are not going to destroythe world?” he asked hopefully.”No,” said the Lord, “the government already has.”