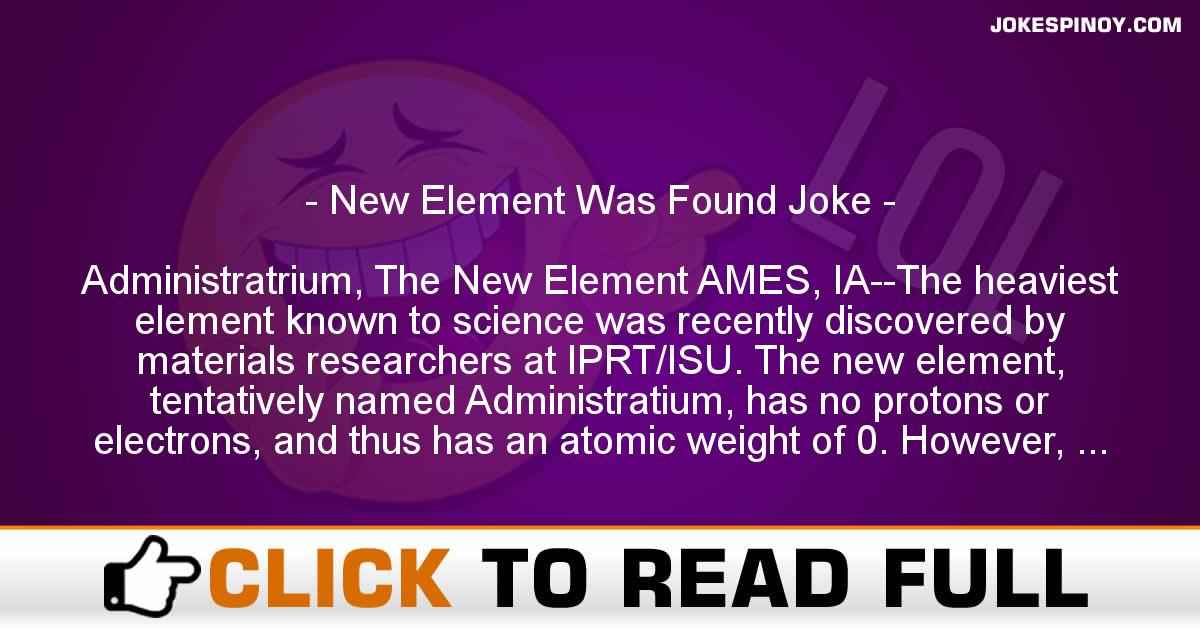 Administratrium, The New Element AMES, IA–The heaviest element known to science was recently discovered by materials researchers at IPRT/ISU. The new element, tentatively named Administratium, has no protons or electrons, and thus has an atomic weight of 0. However, it does have one neuron, 125 a*sistant neutrons, 75 vice neutrons, and 111 a*sistant vice neutrons. This gives it an atomic ma*s of 312. These 312 particles are held together in a nucleus by a force that involves the continuous exchange of particles called morons.Since it has no electrons, Administratium is totally inert. However, it can be detected chemically, since it impedes every reaction it comes into contact with. According to its discovers, a tiny amount of Administratium caused on reaction to take over four days to complete; the normal reaction time is less than one second.Administratium has a normal half life of approximately three years, at which time it does not actually decay, but instead undergoes a reorganization in which neutrons, vice neutrons, and a*sistant vice neutrons exchange places. Studies have shown that the atomic ma*s usually increases after each reorganization.Research at other laboratories indicates that Administratium occurs naturally in the atmosphere. It tends to concentrate at points, such as governmental agencies, large corporations, and universities. It is always found in the newest, best appointed and best maintained buildings.Scientists point out that Administratium is known to be toxic at any level of concentration and can easily destroy any productive reactions where it is allowed to accumulate. Attempts are being made to determine how Administratium can be controlled to prevent irreversible damage, butresults to date are not promising.