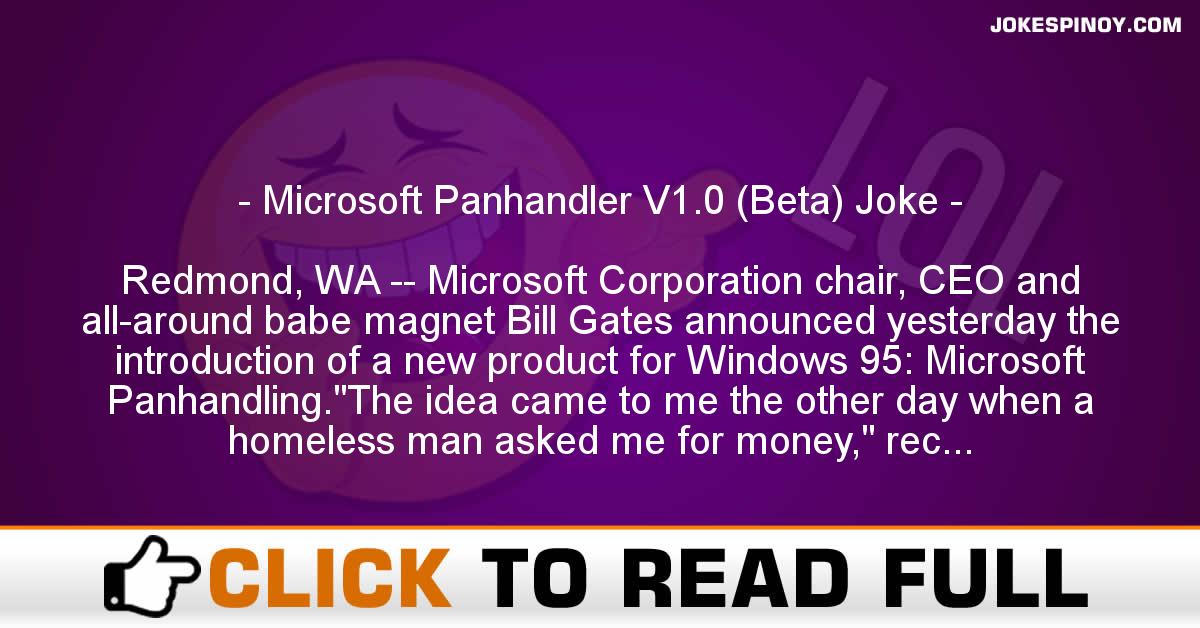 Redmond, WA — Microsoft Corporation chair, CEO and all-around babe magnet Bill Gates announced yesterday the introduction of a new product for Windows 95: Microsoft Panhandling.”The idea came to me the other day when a homeless man asked me for money,” recalls Gates. “I suddenly realized that we were missing a golden opportunity. Here was a chance to make a profit without any initial monetary investment. Naturally, this man then became my compet**ion, so I had my limo driver run over him several times.”Microsoft engineers have been working around the clock to complete Gates’ vision of panhandling for the 21st century.”We feel that our program designers really understand how the poor and needy situation works,” says Microsoft Homeless product leader Bernard Liu. “Except for the fact that they’re stinking rich.”Microsoft Panhandling will be automatically installed with Windows 95. At random intervals, a dialog box pops up, asking the user if they could spare any change so that Microsoft has enough money to get a hot meal. (“This is a little lie,” admits software engineer Adam Miller, “since our diet consists of Coke and Twinkies, but what panhandler doesn’t embellish a little?”) The user can click Yes, in which case a random amount of change between $.05 and $142.50 is transferred from the user’s bank account to Microsoft’s. The user can also respond No, in which case the program politely tells the user to have a nice day. The “No” button has not yet been implemented.”We’re experiencing a little trouble programming the No button,” Bernard Liu says, “but we should definitely have it up and running within the next couple of years. Or at least by the time Windows 2014 comes out. Maybe.” Gates says this is just the start of an entire line of products.”Be on the lookout for products like Microsoft Mugging, which either takes $50 or erases your hard drive, and Microsoft Squeegee Guy, which will clean up your Windows for a dollar.” (When Microsoft Squeegee Guy ships, Windows 95 will no longer automatically refresh your windows.)But there are competitors on the horizon. Sun Microsystems and Oracle Corporation are introducing panhandling products of their own.”Gates is a few tacos short of a combination platter, if you get my drift,” says Oracle Head Honcho and 3rd degree black belt Larry Ellison. “I mean, in the future, we won’t need laptop computers asking you for change. You’ll have an entire network of machines asking you for money.”Gates responded with, “I know what you are, but what am I?” General pandemonium then ensued.