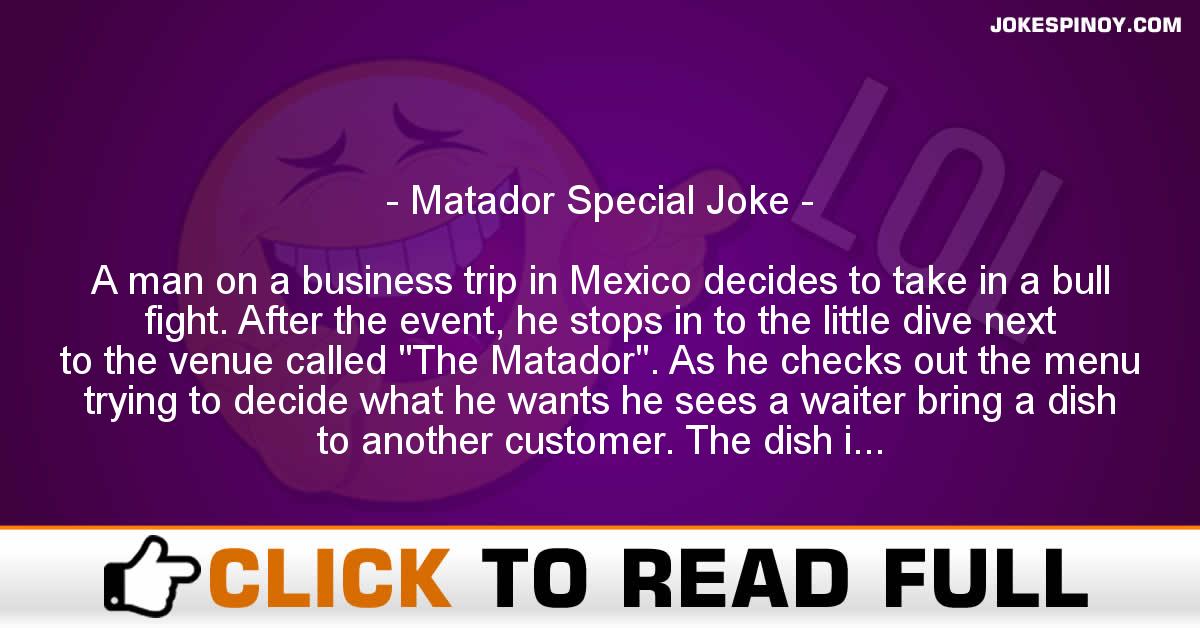 A man on a business trip in Mexico decides to take in a bull fight. After the event, he stops in to the little dive next to the venue called “The Matador”. As he checks out the menu trying to decide what he wants he sees a waiter bring a dish to another customer. The dish is spaghetti with these two huge meat balls. When the waiter comes to his table, he inquires. “That is the ” replies the waiter. “Spaghetti and Bull testicles. We get them after the bull fight. It is exquisite!” “That’s what I’ll have!”, says the businessman. “I’m very sorry senor, but that dish is only available once per day”. Disappointed, the man orders another dish and plans to try again the next day. So again, the next day he goes to the bull fights, and afterwards stops into the dive. Just as the waiter is coming to his table, he sees another waiter bringing the “” to another customer who was there before him. “Damn!” he says to himself. “And tomorrow’s my last day here.” So the next day, he skips the bull fight, and stands in line at the cafe. He is the first one seated, and proudly proclaims, “I’ll have the !” “Very well, senor!” responds the waiter. Soon afterwards, the waiter brings out his dish, but the meat balls are disappointingly small. Very small, as a matter of fact. “What’s with this!” the now angry man shouts. “I’m very sorry, senor” said the waiter, “but the bull does not always lose!”