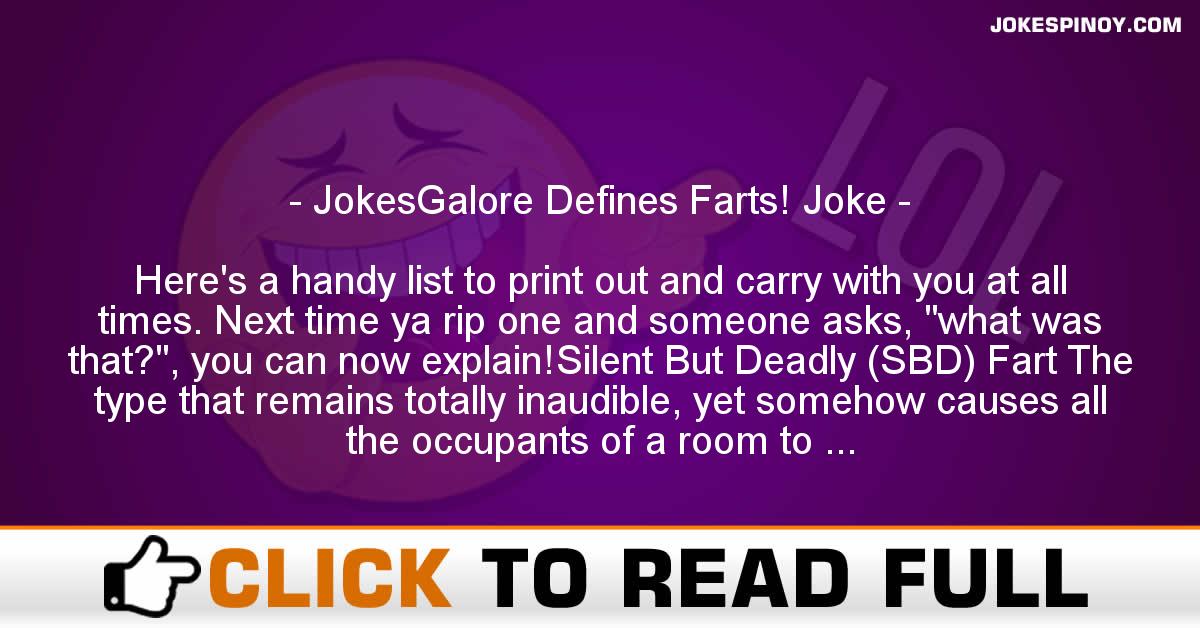 Here’s a handy list to print out and carry with you at all times. Next time ya rip one and someone asks, “what was that?”, you can now explain!Silent But Deadly (SBD) Fart The type that remains totally inaudible, yet somehow causes all the occupants of a room to collapse. Can smell like anything, nasal investigators rarely have time to distinguish an odour.Eggy Fart Smells very much like rotten eggs (or Hydrogen Sulphide). A powerful odor which tends to put people off lunch. Often rips out in the fashion of a Bunbuster.Windy Fart The sort of fart which goes ‘Whoosh’, and is more felt than heard. A little like an SBD, but louder and considerably less toxic.Growling Fart Happens deep within the rectum (and therefore has no smell). Somehow never meets the light of day. Tends to growl like a dog at the vets.Worrying Fart The kind which seems to be a fart right up to the point at which you release it. At this stage matters become less sure, as it feels too solid for comfort. You go to the bathroom and check your underpants at the next possible opportunity.Prelude To A Poopie You feel like you have got a large beefy one, but out comes a tiny squeaker fart, and the head of something ma*sive. You tense your buttocks fast, lest you give birth to the brown equivalent of a zeppelin.Compost Fart You know the compost heap that a gardener keeps at the bottom of the garden? Well if you jump on it you will have some idea of what a compost fart sounds and smells like. Do not attempt this one while you have company.Beefy One Sounds loud, and butch eg. ‘BRAAAAMMPPP!’. Will smell a bit like the rotting offspring of a B.S.E infected cow and a dogturd.Present (a.k.a ‘Time I Wasn’t Here’ Fart) The type of fart which seems harmless, but then brings a small poopie as a housewarming gift. You shuffle off to the toilet, and thank God you weren’t in a business meeting when it happened. If you were in a business meeting of course, you’re screwed.Squeaky Fart Sounds like ‘Wheeek’. Normally smells foul.Bunbuster Fart ‘BRAAA!’ Sounds like a Beefy one, except much more sudden and much much more powerful. Generally smells eggy or beefy. Leaves your a*shole smarting. You really feel these babies.Trouser Ripping Special Sends seismic ripples to the next city. Rips the back of your pants. This fart genuinely hurts, and you can still feel it 20 minutes later. Anyone sitting nearby at the time will suffer hearing loss.Escape Pod Fart You think you got away with this one. You forced it out as silently as possible, and nobody heard. You take deep sniffs through your nose, as discreetly as possible. You smell nothing but your deodorant. Then 30 seconds later, as if released from a stasis field, everyone starts to cough and splutter. You point to the person next to you and try to look innocent.Brewer Fart You try to push a brewer fart the last furlong, but it stays firmly lodged deep within your bowels. You come to the conclusion that it is some form of gaseous landmark.Sphinctal Napalm Tends to occur a few hours after a hot curry. Nevermind the smell, worry about the burning sensation and the nasty stain you know it must have left.Stalker Fart Occurs when you leave the room to politely fart elsewhere, and save people the trouble of breathing your flatulent devils breath. You go back into the room, but LO! The foul nasal bombardment has followed you, and you are duly criticised for poor manners.Burble Fart Bubbly!On The Spot Fart You didn’t even know it was there, but suddenly ‘Brrmp’.Not Now! (a.k.a Anal Control Fart) You feel the presence of a mighty fart, and are unable to release it due to your situation. Happens on first dates, at important meetings, and on other such inexcusable occasions. You clench your buttocks together so hard that you nearly give yourself a stroke, and wait for the pressure to subside. Success depends on a number of factors, but Sods law tends to win out in the end.Hydrated Flatulation (a.k.a Wet Fart) The original wet fart, which leaves a mark on your pants, and gives you a cold wet sticky sensation when you walk. You might not like this little bugger, but you feel right at home with it.GNL Fart Gambled ‘n’ lost. You take a gamble that it’s going to be a fart and stay where you are, but realize tragically that this is much more than a fart…Underwater Fart Often done in the bath, or while swimming. Sounds like the engine of a nuclear sub. Can be smelt on rising to the surface, and experienced windbreakers will often catch the fart in an upturned jam jar, in order to set light to them.Gunshot Fart Gunshot farts sound just like a gunshot. They are exceedingly rare. In fact they are so rare that most people don’t know they even exist. One report continues: “I have only witnessed one gunshot fart myself, my own, and almost scared the poop out of my girlfriend who was lying asleep beside me at the time. She thought it was a gunshot, and it was so named.” A few others have refered to these rare creatures, so proving their existance.Tandem Fart Tandem Farts are the worst smelling and longest lasting farts ever to be recorded. They are so named since they are the only fart that is detectable by the nose on a Tandem bicycle (bicycle built for two) as it is being pedaled. A tandem fart occurs when the captain of the bike farts and the stoker smells it. As you can imagine, the fart most be extremely strong to compete with the wind and to get to the stoker’s nose. Extremely disgusting farts off of a tandem are sometimes called Tandem farts, but they can never be confirmed as true Tandem.