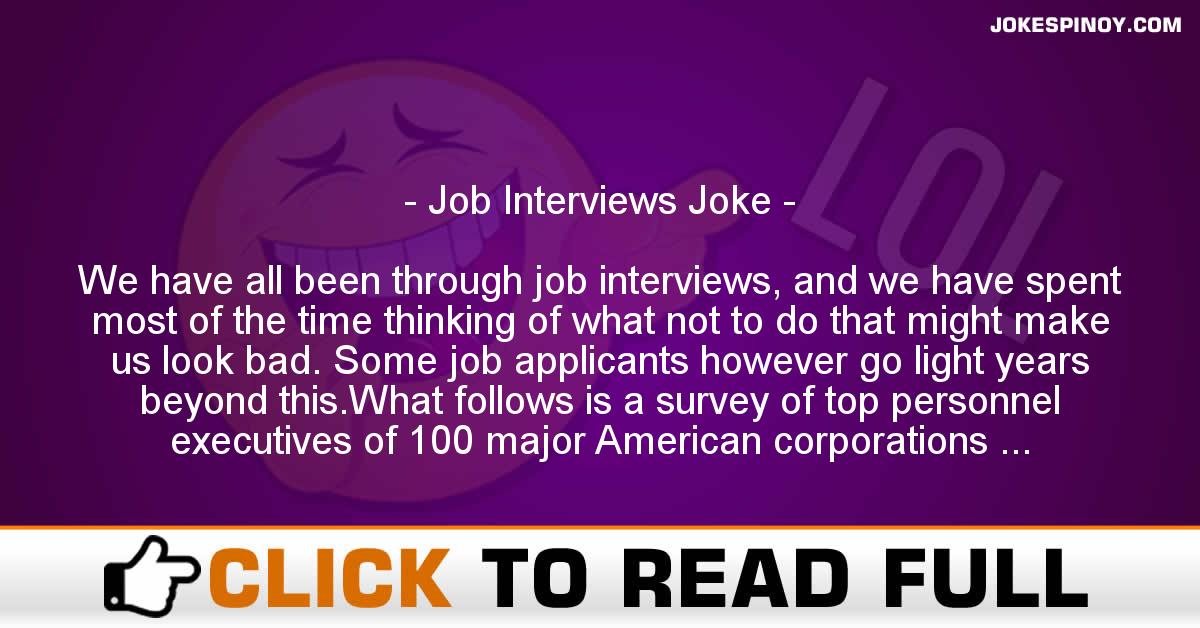 We have all been through job interviews, and we have spent most of the time thinking of what not to do that might make us look bad. Some job applicants however go light years beyond this.What follows is a survey of top personnel executives of 100 major American corporations who were asked for stories of unusual behavior by job applicants. What follows is an unbelievable list of what we can only call “the lowlights.”1. Said he was so well qualified that if he didn’t get the job, it would show that the company’s management was incompetent.2. Stretched out on the floor to fill out the job application.3. Brought her large dog to the interview.4. Chewed bubble gum and constantly blew bubbles.5. Candidate kept giggling through a serious interview.6. She wore a Walkman and said she could listen to me and the music at the same time.7. Bald candidate abruptly excused himself. Returned a few minutes later wearing a hairpiece.8. Applicant challenged interviewer to arm wrestle.9. Asked to see interviewer’s resume to see if the personnel executive was qualified to judge the candidate.10. Announced she hadn’t had lunch and proceeded to eat a hamburger and french fries during the interview.11. Without saying a word, candidate stood up and walked out during the middle of an interview.12. Man wore jogging suit to interview for position as vice president of finance.13. Said if he were hired, he would demonstrate his loyalty by having the corporate logo tattooed on his forearm.14. Interrupted to phone his therapist for advice on answering specific interview questions.15. Wouldn’t get out of the chair until I would hire him. I had to call the police.16. When I asked him about his hobbies, he stood up and started tap dancing around my office.17. Had a little pinball game and challenged me to play with him.18. Bounced up and down on my carpet and told me I must be highly thought of by the company because I was given such a thick carpet.19. Took the brush out of my purse and brushed his hair and then left.20. Pulled out a Polaroid camera and snapped a flash picture of me. Said he collected photos of everyone who interviewed him.21. Candidate asked me if I would put on a suit jacket to ensure that the offer was formal.22. Said he wasn’t interested because the position paid too much.23. While I was on a long distance phone call, the applicant took out a copy of Penthouse and looked through the photos only, stopping longest at the centerfold.24. During the interview, an alarm clock went off from the candidate’s briefcase. He took it out, shut it off, apologized andsaid he had to leave for another interview.25. A telephone call came in for the job applicant during the interview. It was his wife. His side of the conversation went like this: ‘Which company? When do I start? What’s the salary?’ I said, “I a*sume you’re not interested in conducting the interview any further”. He promptly responded, “I am as long as you will pay me more”. I didn’t hire him, but later found out there was no job offer. It was a scam to get a higher offer.26. The applicant came in wearing only one shoe. She explained that the other shoe was stolen off her foot on the bus.27. His attache case opened when he picked it up and the contents spilled, revealing ladies’ undergarments, a*sorted make-up and perfume.28. He came to the interview with a moped and left it in the reception area. He didn’t want it to get stolen, and stated that he would require indoor parking for the moped.29. He took off his shoe and sock, applying medicated foot powder and dusted it on the foot and in the shoe. While he was putting back on the shoe and sock, he mentioned that he had to use the powder four times a day and this was the time.30. Candidate said he really didn’t want the job, but the unemployment office needed proof that he was looking for one.31. He whistled when the interviewer was talking.32. Asked who the lovely babe was, pointing to the picture on my desk. When I said it was my wife, he asked if she was home now and wanted my phone number. I called security.33. She threw up on my desk and immediately starting asking questions about the job as if nothing happened.34. Pointing to a black case he carried into my office, he said that if he was not hired, the bomb would go off. Disbelieving, I began to state why he would never be hired and that I was going to call the police. He then reached down to the case, flipped a switch and ran. No one was injured, but I needed to get a new desk.and topping the list….35. Asked if I wanted some cocaine before starting the interview.