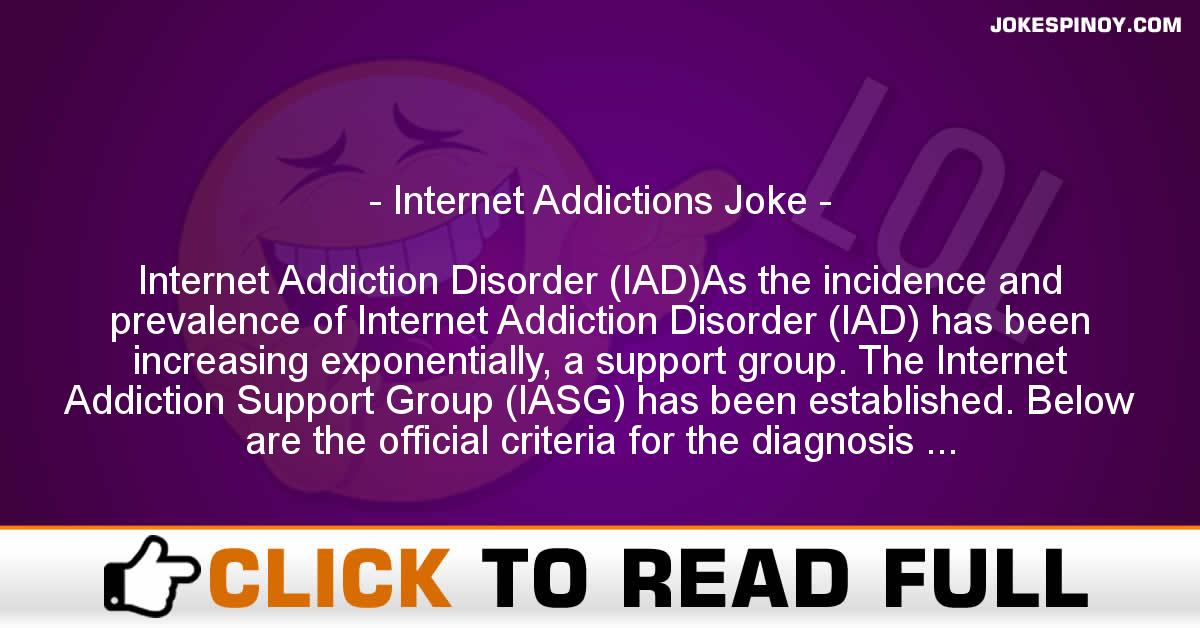 Internet Addiction Disorder (IAD)As the incidence and prevalence of Internet Addiction Disorder (IAD) has been increasing exponentially, a support group. The Internet Addiction Support Group (IASG) has been established. Below are the official criteria for the diagnosis of IAD and subscription information for the IASG.A maladaptive pattern of Internet use, leading to clinically significant impairment or distress as manifested by three (or more) of the following, occurring at any time in the same 12-month period: Diagnostic Criteria(I) tolerance, as defined by either of the following: (A) A need for markedly increased amounts of time on Internet to achieve satisfaction (B) markedly diminished effect with continued use of the same amount of time on Internet(II) withdrawal, as manifested by either of the following (A) the characteristic withdrawal syndrome (1) Cessation of (or reduction) in Internet use that has been heavy and prolonged. (2) Two (or more) of the following, developing within several days to a month after Criterion 1: (a) psych**otor agitation (b) anxiety (c) obsessive thinking about what is happening on Internet (d) fantasies or dreams about Internet (e) voluntary or involuntary typing movements of the fingers (3) The symptoms in Criterion B cause distress or impairment in social, occupational or other important other area of functioning (B) Use of Internet or a similar on-line service is engaged in to relieve or avoid withdrawal symptoms.(III) Internet is often accessed more often or for longer periods of time than was intended(IV) There is a persistent desire or unsuccessful efforts to cut down or control Internet use(V) A great deal of time is spent in activitied related to Internet use (e.g., buying Internet books, trying out new WWW browsers, researching Internet vendors, organizing files of downloaded materials(VI) Important social, occupational, or recreational activities are given up or reduced because of Internet use.(VII) Internet use is continued despite knowledge of having a persistent or recurrent physical, social, occupational, or psychological problem that is likely to been caused or exacerbated by Internet use (sleep deprivation, marital difficulties, lateness for early morning appointments, neglect of occupational duties, or feelings of abandonment in significant others)