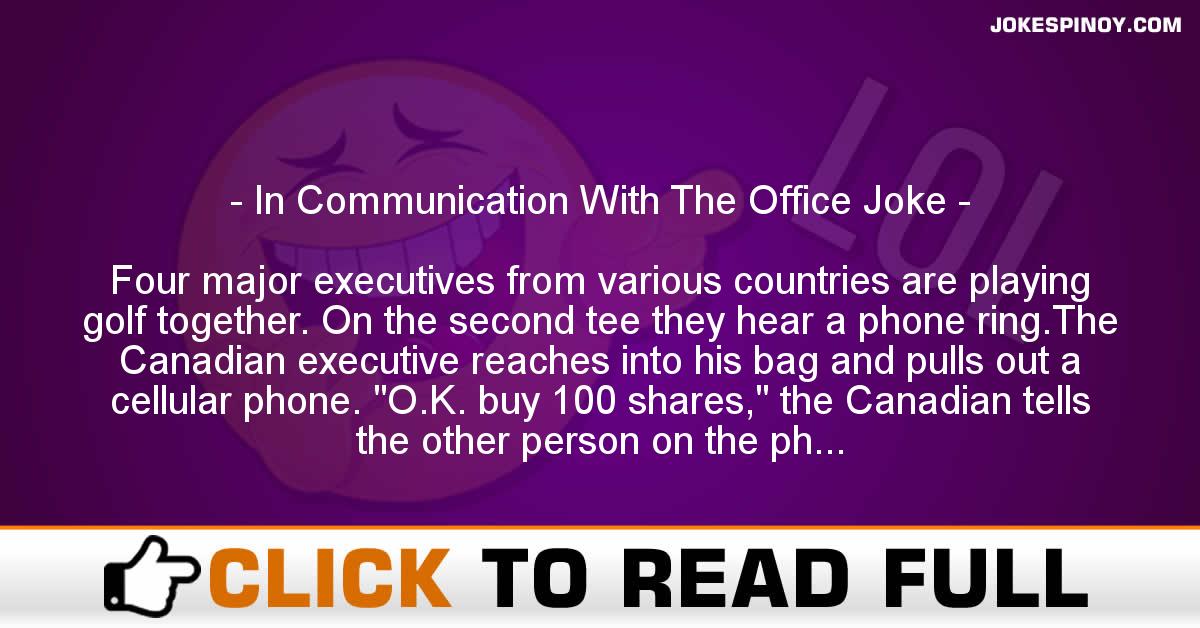 Four major executives from various countries are playing golf together. On the second tee they hear a phone ring.The Canadian executive reaches into his bag and pulls out a cellular phone. “O.K. buy 100 shares,” the Canadian tells the other person on the phone. Then he looks at the others and says, “I’m such an important person, that I have to make sure my employees can reach me at any time. Therefore I carry a cell phone everywhere.”On the next tee, they hear the sound of another phone. All of a sudden, the American puts his finger to his mouth and his thumb to his hear and begins talking. When he gets off the line he tells the others, “I’m so important that I had my company install a microphone in my index finger and a speaker in my thumb. That way, I don’t have to worry about carrying a cellular telephone.” The people are very impressed and move on down the fairway.On the green, they hear another phone ring. The German stands up tall and says, “O.K., sell the company now.” Then he loosens up and tells the others, “I’m so important that I had my company put a microphone in my lip and a speaker in my ear. That way all I need to do is stand up straight to get the signal.”Everybody is really impressed and they continue playing.At the next tee they hear another phone. All of a sudden, the Japanese executive runs into the bushes. After a few minutes, the others get worried about him so they go into the bushes to find him.They find him with his pants around his knees, squatting.”Oh, we’re sorry,” the American exclaims, somewhat embarassed, “we’ll leave you alone.””That’s O.K.”, the Japanese executive says, “I’m just waiting for a fax!”