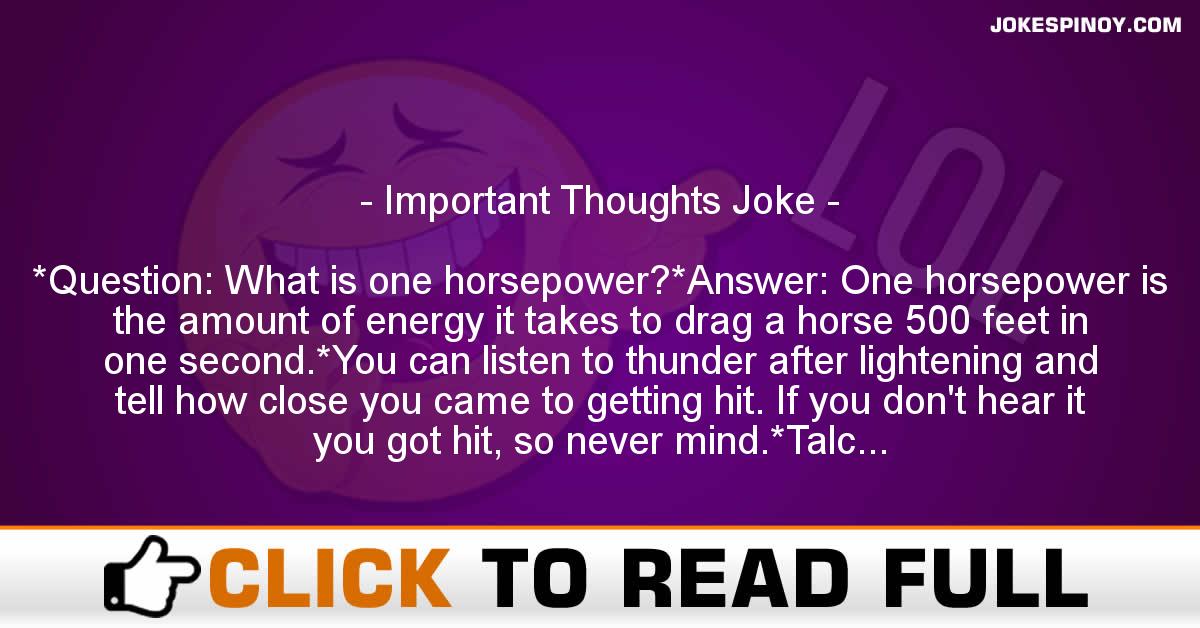 *Question: What is one horsepower?*Answer: One horsepower is the amount of energy it takes to drag a horse 500 feet in one second.*You can listen to thunder after lightening and tell how close you came to getting hit. If you don’t hear it you got hit, so never mind.*Talc is found on rocks and on babies.*The law of gravity says no fair jumping up without coming back down.*When they broke open molecules, they found they were only stuffed with atoms. But when theybroke open atoms, they found them stuffed with explosions.*When people run around and around in circles we say they are crazy. When planets do it we saythey are orbiting.*Rainbows are just to look at, not to really understand.*While the earth seems to be knowingly keeping its distance from the sun, it is really onlycentrificating.*Someday we may discover how to make magnets that can point in any direction.*South America has cold summers and hot winters, but somehow they still manage.*Most books now say our sun is a star. But it still knows how to change back into a sun in thedaytime.*Water freezes at 32 degrees and boils at 212 degrees. There are 180 degrees between freezingand boiling because there are 180 degrees between north and south.*A vibration is a motion that cannot make up its mind which way it wants to go.*There are 26 vitamins in all, but some of the letters are yet to be discovered. Finding them all means living forever.*There is a tremendous weight pushing down on the center of the Earth because of so muchpopulation stomping around up there these days.*Lime is a green-tasting rock.*Many dead animals in the past changed to fossils while others preferred to be oil.*Genetics explain why you look like your father and if you don’t why you should.*Vacuums are nothings. We only mention them to let them know we know they’re there.*Some oxygen molecules help fires burn while others help make water, so sometimes it’s brotheragainst brother.*Some people can tell what time it is by looking at the sun. But I have never been able to make outthe numbers.*We say the cause of perfume disappearing is evaporation. Evaporation gets blamed for a lot ofthings people forget to put the top on.*To most people solutions mean finding the answers. But to chemists solutions are things that are still all mixed up.*In looking at a drop of water under a microscope, we find there are twice as many H’s as O’s.*Clouds are high flying fogs.*I am not sure how clouds get formed. But the clouds know how to do it, and that is the important thing.*Clouds just keep circling the earth around and around. And around. There is not much else to do.*Water vapor gets together in a cloud. When it is big enough to be called a drop, it does.*Humidity is the experience of looking for air and finding water.*We keep track of the humidity in the air so we won’t drown when we breathe.*Rain is often known as soft water, oppositely known as hail.*Rain is saved up in cloud banks.*In some rocks you can find the fossil footprints of fishes.*Cyanide is so poisonous that one drop of it on a dogs tongue will kill the strongest man.*A blizzard is when it snows sideways.*A hurricane is a breeze of a bigly size.*A monsoon is a French gentleman.*Thunder is a rich source of loudness.*Isotherms and isobars are even more important than their names sound.*It is so hot in some places that the people there have to live in other places.*The wind is like the air, only pushier.