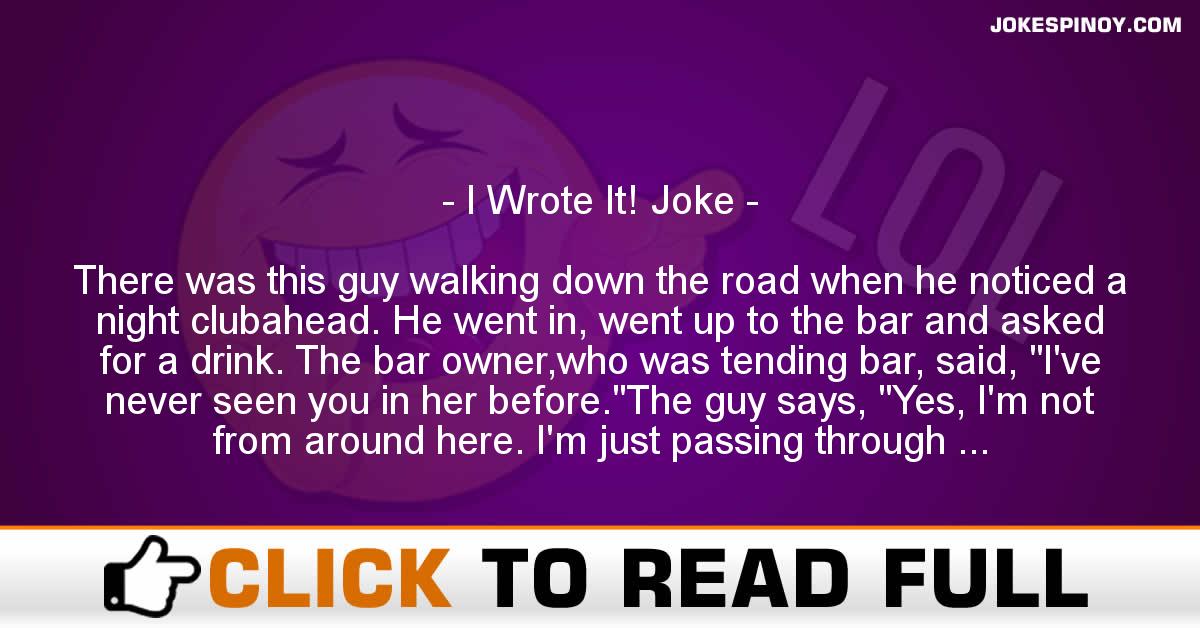 There was this guy walking down the road when he noticed a night clubahead. He went in, went up to the bar and asked for a drink. The bar owner,who was tending bar, said, “I’ve never seen you in her before.”The guy says, “Yes, I’m not from around here. I’m just passing through on myway to find a job.”The owner asks, “What do you do?”The guy says, “I write music and play the piano.”The owner, looking excited says, “REALLY! I have an ad in the paper lookingforsomeone to play my piano. Please sit down at the keyboard and play for meif you’re interested.”The guy does and as he plays the piano the owner is in awe of his talentand musical abilities. The owner says, “You play the piano more beautifullythan anyone I have ever heard! What is the name of that song?”The guy says, “I wrote that song and the name is Two Lesbians Fucking TheirBrains Out.”The owner gasps and is taken back. He says, “My gosh, that’s a terrible namefor such a beautiful song. Do you know any others?”The guy smiles and plays again. Once more the owner is astounded by thisguy’s talent and musical abilities. He’s almost afraid to ask but he doesask what the name of the song he just played.The guy answers, “I Fucked Her All Night Until She Couldn’t Take Anymore.”The owner again was shocked. The owner says, “Ok, you play beautifully andthe songs you have written are incrediable. I will hire you, but you haveto promise not to tell the name of your songs to the patrons.” The guyagrees.That night the guy was playing the piano and the crowd was just as amazedas the owner was with this man’s musical abilities. After playing twosongs the crowd stood up and applauded. The guy was really pleased andstood up to take a bow. When he stood up and faced the audience, it wasapparent that his zipper was open and his dick and balls were hanging out.One of the patrons close to the piano says, “Sir, do you know your dick andballs are hanging out?”The guy smiles and says, “KNOW IT, I WROTE IT!”

Topic of Interest:    know it i wrote it joke