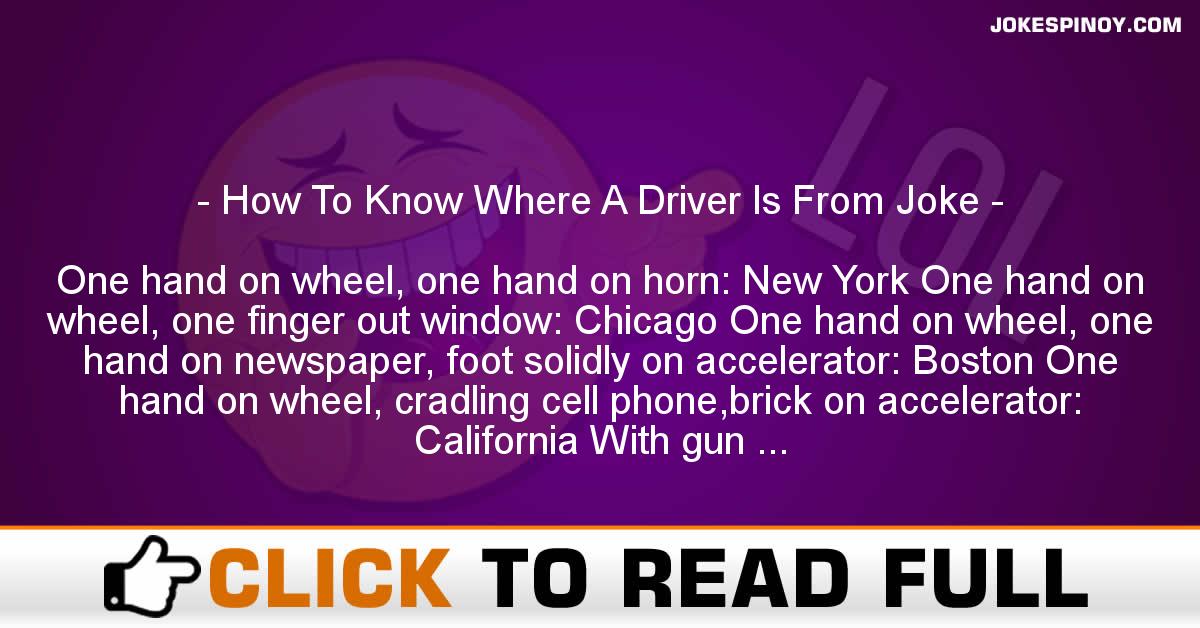 One hand on wheel, one hand on horn: New York One hand on wheel, one finger out window: Chicago One hand on wheel, one hand on newspaper, foot solidly on accelerator: Boston One hand on wheel, cradling cell phone,brick on accelerator: California With gun in lap: L.A. Both hands on wheel, eyes shut, both feet on brake, quivering in terror: Ohio, but driving in California. Both hands in air, gesturing, both feet on accelerator, head turned to talk to someone in back seat: Italy One hand on latte, one knee on wheel, cradling cell phone, foot on brake, mind on game: Seattle One hand on wheel, one hand on hunting rifle, alternating between both feet being on the accelerator and both on the brake, throwing a McDonalds bag out the window: Texas city male One hand on wheel, one hand hanging out the window, keeping speed steadily at 70mph, driving down the center of the road unless coming around a blind curve, in which case they are on the left side of the road: Texas country male One hand constantly refocusing the rear-view mirror to show different angles of the BIG hair, one hand going between mousse, brush, and rat-tail to keep the helmet hair going, both feet on the accelerator, poodle steering the car, chrome .38 revolver with mother of pearl inlaid handle in the glove compartment: Texas female Both hands on steering wheel in a relaxed posture, eyes constantly checking the rear-view mirror to watch for visible emissions from their own or another’s car: Colorado One hand on steering wheel, yelling obscenities, the other hand waving gun out the window and firing repeatedly, keeping a careful eye out for landmarks along the way so as to be able to come back and pick up any bullets that didn’t hit other motorists so as not to litter: Colorado resident on spotting a car with Texas plate. Four wheel drive pickup truck, shotgun mounted in rear window, beer cans on floor, squirrel tails attached to antenna: West Virginia male. Two hands gripping wheel, blue hair barely visible above window level, driving 35 on the interstate in the left lane with the left blinker on: Florida “seasoned citizen” driver, also known as “no-see-um”

Topic of Interest:    a no seeum joke