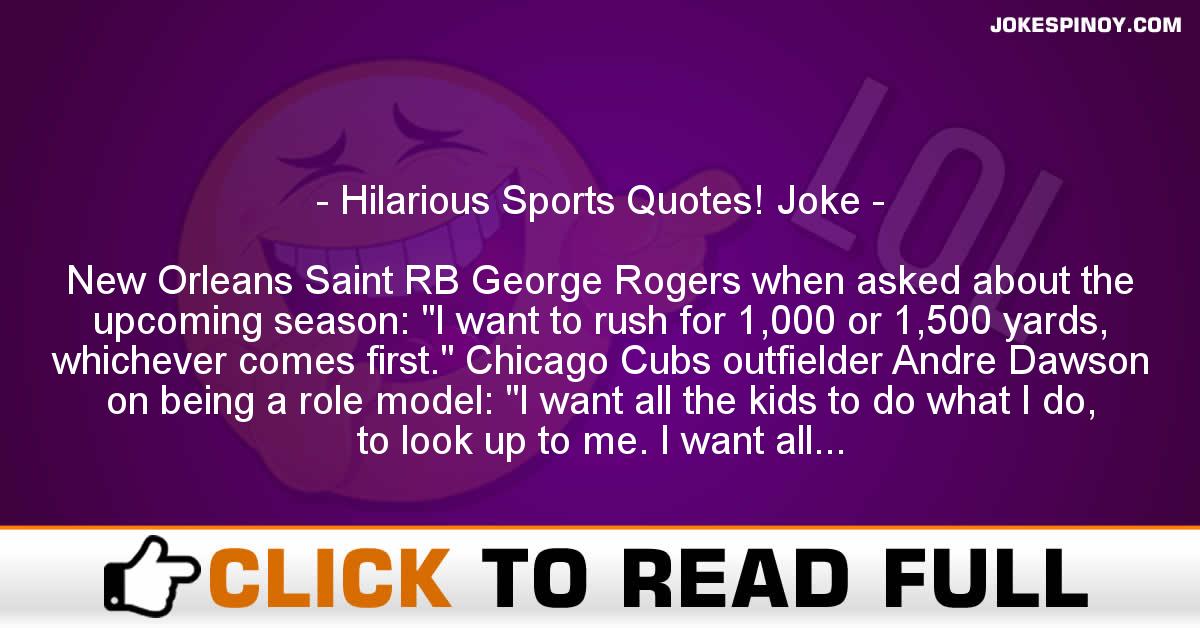 New Orleans Saint RB George Rogers when asked about the upcoming season: “I want to rush for 1,000 or 1,500 yards, whichever comes first.” Chicago Cubs outfielder Andre Dawson on being a role model: “I want all the kids to do what I do, to look up to me. I want all the kids to copulate me.” And, upon hearing Joe Jacobi of the Skins say: “I’d run over my own mother to win the Super Bowl,” Matt Millen of the Raiders said, “To win, I’d run over Joe’s Mom, too.” Football commentator and former player Joe Theismann: “Nobody in football should be called a genius. A genius is a guy like Norman Einstein.” (1996) Senior basketball player at the University of Pittsburgh: “I’m going to graduate on time, no matter how long it takes.” Bill Peterson, a Florida State football coach: “You guys line up alphabetically by height.” and “You guys pair up in groups of three, then line up in a circle.” Clemson recruit Ray Forsythe, who was ineligible as a freshman because of academic requirements: “I play football. I’m not trying to be a professor. The tests don’t seem to make sense to me, measuring your brain on stuff I haven’t been through in school.” Boxing promoter Dan Duva on Mike Tyson hooking up again with promoter Don King: “Why would anyone expect him to come out smarter? He went to prison for three years, not Princeton.” Stu Grimson, Chicago Blackhawks left wing, explaining why he keeps a color photo of himself above his locker: “That’s so when I forget how to spell my name, I can still find my clothes.” Shaquille O’Neal on whether he had visited the Pantheon during his visit to Greece: “I can’t really remember the names of all the clubs that we went to.” Shaquille O’Neal, on his lack of championships: “I’ve won at every level, except college and pro.” Lou Duva, veteran boxing trainer, on the Spartan training regime of of heavyweight Andrew Golota: “He’s a guy who gets up at six o’clock in the morning regardless of what time it is.” Pat Williams, Orlando Magic general manager, on his team’s 7-27 record in 1992: “We can’t win at home. We can’t win on the road. As general manager, I just can’t figure out where else to play.” Chuck Nevitt, North Carolina State basketball player, explaining to Coach Jim Valvano why he appeared nervous at practice: “My sister’s expecting a baby, and I don’t know if I’m going to be an uncle or an aunt.” Tommy Lasorda, Dodger manager, when asked what terms Mexican-born pitching sensation Fernando Valenzuela might settle for in his upcoming contract negotiations: “He wants Texas back.” (1981) Darrell Royal, Texas football coach, asked if the abnormal number of Longhorn injuries that season resulted from poor physical conditioning: “One player was lost because he broke his nose. How do you go about getting a nose in condition for football?” (1966) Mike McCormack, coach of the hapless Baltimore Colts after the team’s co-captain, offensive guard Robert Pratt, pulled a hamstring running onto the field for the coin toss against St. Louis: “I’m going to send the injured co-captain out for the toss next time too.” (1981) Steve Spurrier, Florida football coach, telling Gator fans that a fire at Auburn’s football dorm had destroyed 20 books: “But the real tragedy was that 15 hadn’t been colored yet.” (1991) Jim Finks, New Orleans Saints G.M., when asked after a loss what he thought of the refs: “I’m not allowed to comment on lousy no good officiating.” (1986) Alan Kulwicki, stock car racer, on racing Saturday nights as opposed to Sunday afternoons: “It’s basically the same, just darker.” (1991) Lincoln Kennedy, Oakland Raiders tackle, on his decision not to vote: “I was going to write myself in, but I was afraid I’d get shot.” (1996) Frank Layden, Utah Jazz president, on a former player: “I told him, ‘Son, what is it with you? Is it ignorance or apathy?’ He said, ‘Coach, I don’t know and I don’t care.'” (1991) Torrin Polk, University of Houston receiver, on his coach, John Jenkins: “He treats us like men. He lets us wear earrings.” Shelby Metcalf, basketball coach at Texas A&M, recounting what he told a player who received four F’s and one D: “Son, looks to me like you’re spending too much time on one subject.” Oiler coach Bum Phillips: When asked by Bob Costas why he takes his wife on all the road trips, responded “Because she is too damn ugly to kiss good-bye.”