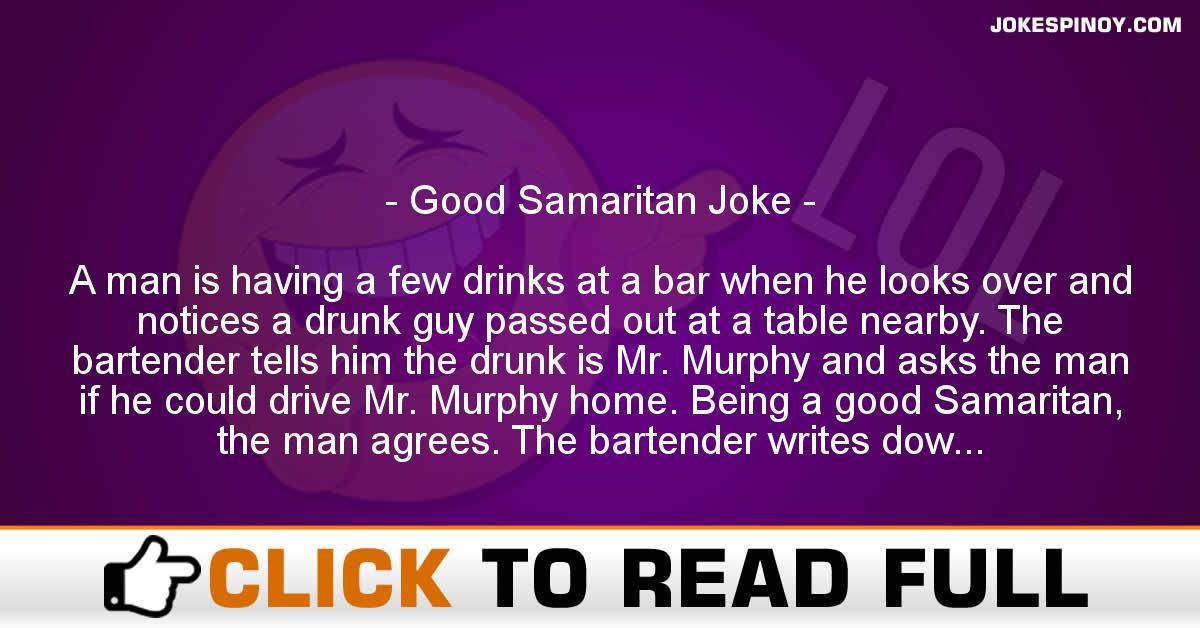 A man is having a few drinks at a bar when he looks over and notices a drunk guy passed out at a table nearby. The bartender tells him the drunk is Mr. Murphy and asks the man if he could drive Mr. Murphy home. Being a good Samaritan, the man agrees. The bartender writes down the address and gives it to him.The man walks over and tries to wake Mr. Murphy but Mr. Murphy is groggy and quite drunk. The man helps Mr. Murphy to his feet and Mr. Murphy falls to the floor in a heap.”Jeez,” the man says wondering how anyone could drink so much. He takes Murphy by the arm and practically drags him out to the car. Once there he leans him against the side of his car while he looks for his keys. Mr. Murphy slides down to the ground. The man finds his keys and manages to get Murphy positioned in the car.He then drives to the address the bartender gave him. He opens the passenger door and helps Mr. Murphy out and the guy falls to the ground. Cursing softly, now, the man helps him to his feet and practically drags him to the front door. He lets go of Mr. Murphy to knock on the door and the guy falls down again. He helps him to his feet as Mrs. Murphy answers the door.”Hi, Mrs. Murphy, Your husband had a little too much to drink tonight so I gave him a ride home.””That was nice of you,” she says, looking around… “But where’s his wheelchair?” (woo-hoo! that’s MEAN! 🙂