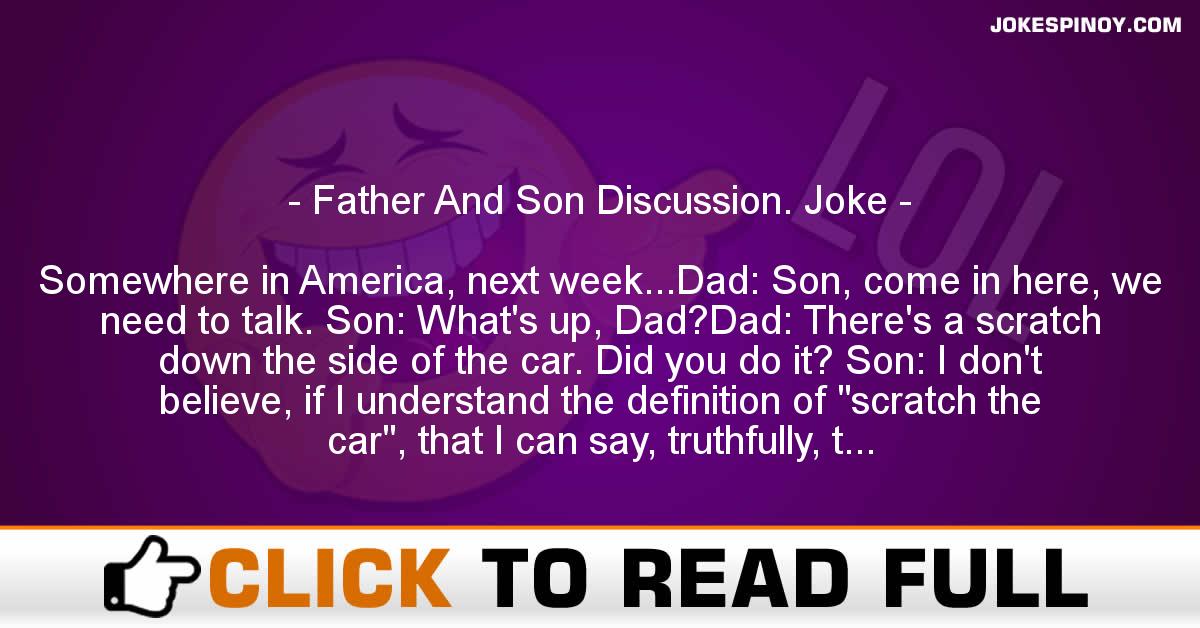 Somewhere in America, next week…Dad: Son, come in here, we need to talk. Son: What’s up, Dad?Dad: There’s a scratch down the side of the car. Did you do it? Son: I don’t believe, if I understand the definition of “scratch the car”, that I can say, truthfully, that I did not scratch the car.Dad: Well, it wasn’t there yesterday, and you drove the car last night, and no one else has driven it since. How can you explain the scratch? Son: Well, as I’ve said before, I have no recollection of scratching the car. While it is true that I did take the car out last night, I did not scratch it.Dad: But your sister, Monica, has told me she saw you back the car against the mailbox at the end of the driveway, heard a loud scraping sound, saw you get out to examine the car, and then drive away. So again I’ll ask you, yes or no, did you scratch the car? Son: Oh, you mean you think you have evidence to prove I scratched it. Well, you see, I understood you to mean did “I” scratch the car. I stand by my earlier statement, that I did not scratch the car.Dad: Are you trying to tell me you didn’t drive the car into the mailbox? Son: Well, you see sir, I was trying to drive the car into the street. I mishandled the steering of the car, and it resulted in direct contact with the mailbox, though that was clearly not my intent.Dad: So you are then saying that you did hit the mailbox? Son: No sir, that’s not my statement. I’ll refer you back to my original statement that I did not scratch the car.Dad: But the car did hit the mailbox, and the car did get scratched as a result of this contact? Son: Well, yes, I suppose you could look at it that way.Dad: So you lied to me when you said you did not scratch car? Son: No. No, that’s not correct. Your question was “Did I scratch the car?”. From a strict legal definition, as I understood the meaning of that sentence, I did not scratch the car… the mailbox did… I was merely present when the scratching occurred. So my answer of “No” when you asked “Did I scratch the car” was legally correct, although I did not volunteer information.Dad: Where did you learn to talk like a complete idiot? Son: From The President of the United States.

Topic of Interest:    Father-Son having that ‘special’ discussion,   funny jokes about father and son