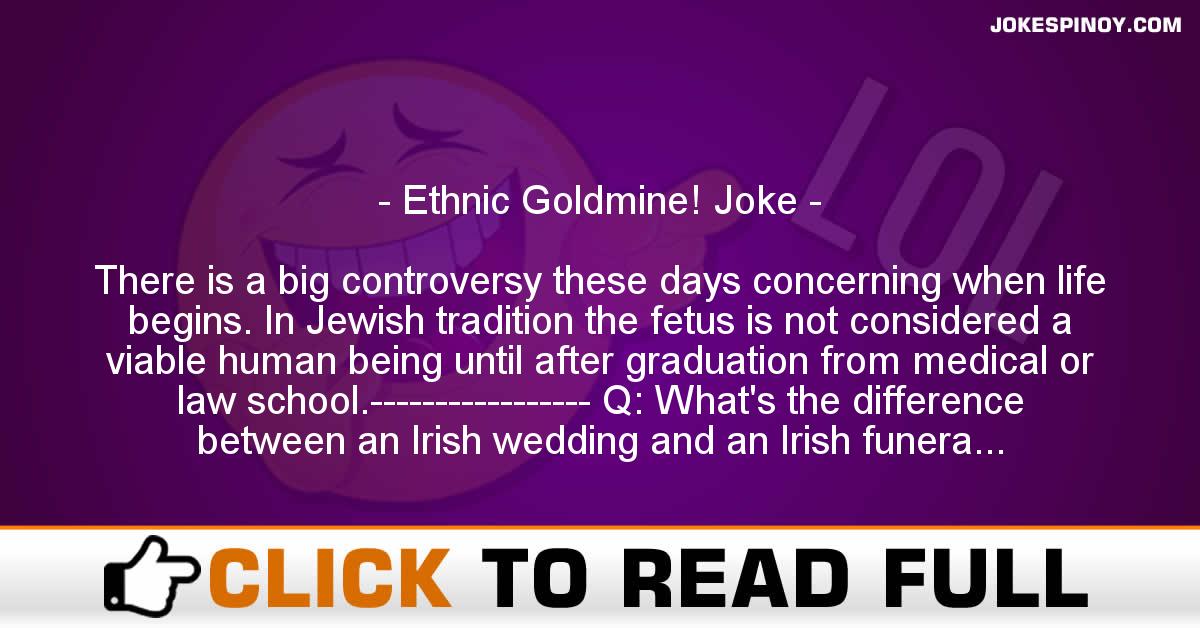 There is a big controversy these days concerning when life begins. In Jewish tradition the fetus is not considered a viable human being until after graduation from medical or law school.—————– Q: What’s the difference between an Irish wedding and an Irish funeral? A: One less drunk!—————– Q: Why are there so many Italian men in New York named Tony? A: When they came over to this country, they had “To NY” stamped on their foreheads.—————– A Russian, a Saudi, a North Korean and an American are walking down the street. A pollster stops them and asks, “Excuse me, what is your opinion of the meat shortage?” The Saudi replies, “Excuse me, what’s a ‘shortage’?” The Russian replies, “Excuse me, what’s meat?” The North Korean replies, “Excuse me, what’s an opinion?” Finally, the American replies, “What’s ‘Excuse me?'”—————– Q: What do New Zealanders call a sheep in their back yard? A: A ride on lawn-mower.—————– Why the British are superior to Americans:1. They speak English.2. When they host a world championship, they invite other countries.3. Visitors to the head of state are only expected to go down on one knee.—————– One day, a Newfoundlander was rowing his boat back home after catching some fish singing “Row, Row, Row Your Boat”. Meanwhile, some aliens decided to test his intelligence.They took out 1/4 of his brain and still he sang, “Row, Row, Row Your Boat”. They took out another 1/4 of his brain, and still he sang “Row, Row, Row Your Boat”.They finally took all of his brains out. The Newfoundlander shook a bit, then started singing “Frere Jacques, Frere Jacques…”—————– HEAVEN Vs. HELL Heaven: An American salary. A British home. Chinese food. A Japanese wife. Hell: A Chinese salary. A Japanese home. British food. An American wife.—————– A guy traveling through the prairies of the USA stopped at a small town and went to a bar. He stood at the end of the bar, ordered a drink, and lit up a cigar.As he sipped down his drink, he stood there quietly blowing smoke rings. After he blew nine or ten smoke rings into the air, an angry native Indian stomped up to him and said, “One more remark like that and I’ll whip your butt!”—————– Short summary of every Jewish Holiday: They tried to kill us, we won, let’s eat!