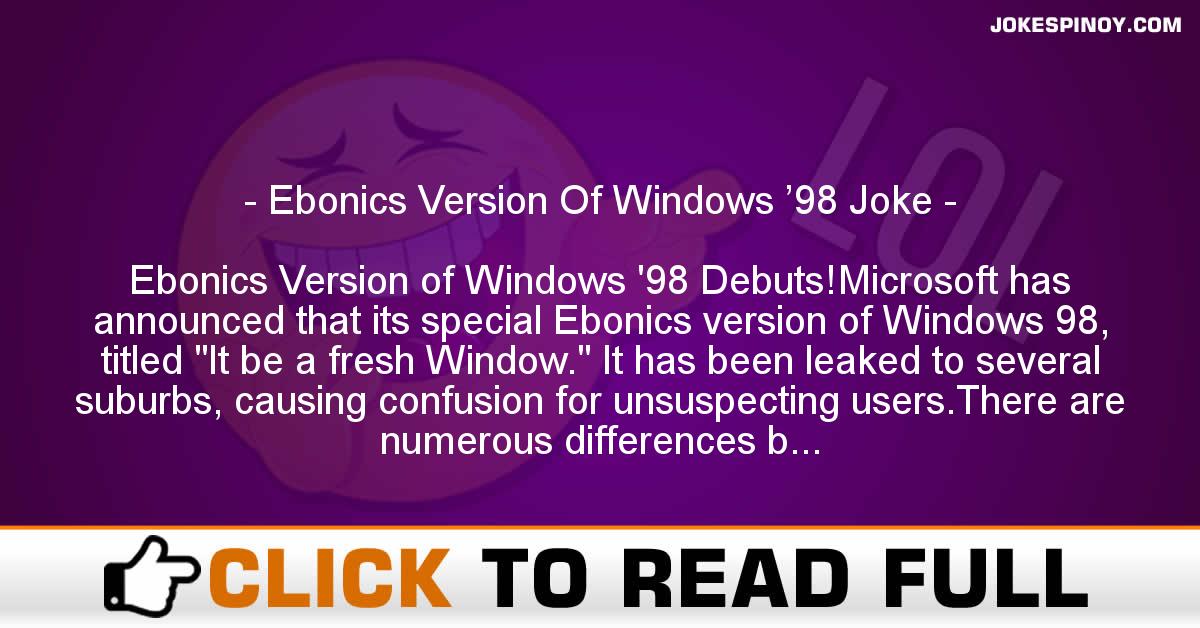 Ebonics Version of Windows ’98 Debuts!Microsoft has announced that its special Ebonics version of Windows 98, titled “It be a fresh Window.” It has been leaked to several suburbs, causing confusion for unsuspecting users.There are numerous differences between Windows 98 and the Ebonics version.When opening the Ebonics version, the familiar windows chime is replaced With a “phat getto track that melts ’em down wit dope-a*s ba*s,” The opening screen features a Windows logo that is spray painted on a brick wall – along with several gangsta signs, slogans and shout outs.On the main screen, My Computer is replaced with “Dis My Shit.”The Recycle Bin has been replaced with a Goodwill dumpster.If users are logged on to a network, the Network Neighborhood is replaced With “Da Hood.”Users have their choice of two animated screen savers: “Marquee,” a lil’ G spray- painting dirty words that move across the screen; or “Flying Bullets,” a ’64 Olds’ loaded with gangstas doing a desktop drive by.Users of the Ebonics version will notice several command and dialogue box changes:1.Break Back In = Re-entry2.Aww Shit = Error3.U Betta Recognize = Delete4.Itz All Good = OK5.4 Real Doe =Yes6.Hold Up, Dawg = Cancel7.Do Dat Shit Again = Reset8.R U Crazy = Are You Sure9.Hunt Dat Bitch Down = Find10. Put A Cap In It = Delete11. Games & Shit = Programs12. Letter Shit = DocumentsThe Ebonics version comes standard with a special edition of Microsoft Works titled “Homie Essentials.”The word processing program greatly differs from the main-stream program. Several words on the title bar have been changed:1.Dat Thang = File2.I Be Seein’ It = View3.Put Sumpin In = Insert4.Hook It Up = Format5.Stuff I Ain’t gone Need =Tools6.Number Shit = Table7.Break In = Window8.What Da F*[email protected]*[email protected]? = HelpNote: “Stuff I ain’t gone need” (Tools) does not include spelling or grammar check options, and Auto Correct has been replaced with “Keepin’ it Real.”