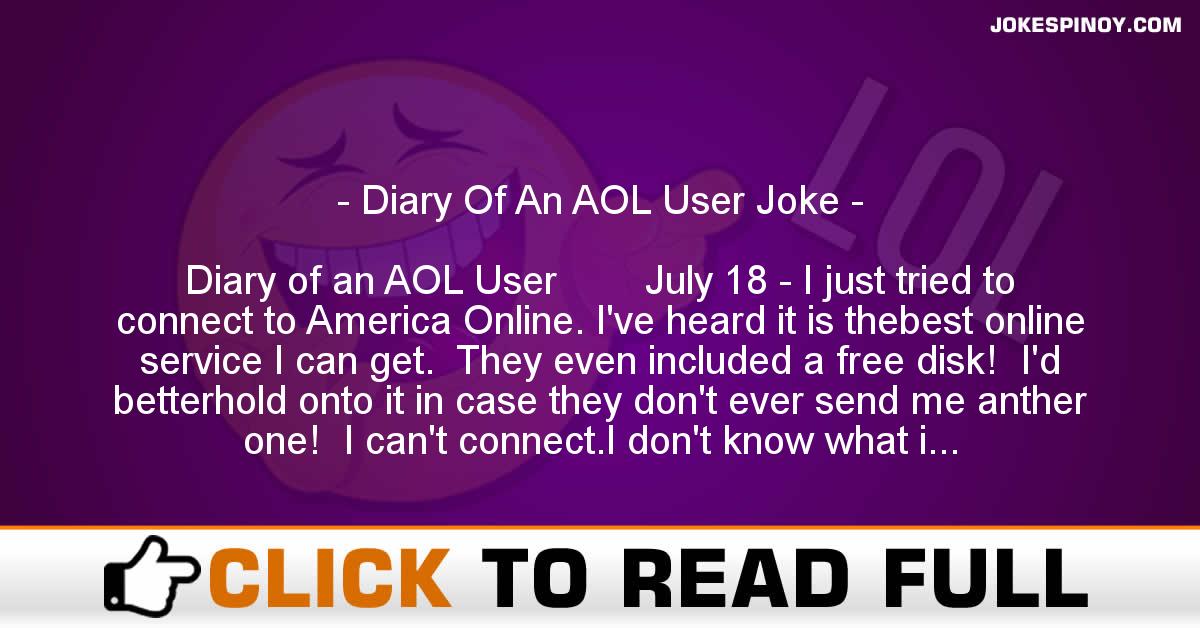 Diary of an AOL User July 18 – I just tried to connect to America Online. I’ve heard it is thebest online service I can get. They even included a free disk! I’d betterhold onto it in case they don’t ever send me anther one! I can’t connect.I don’t know what is wrong.July 19 – Some guy at the tech support center says my computer needs amodem. I don’t see why. He’s just trying to cheat me. How dumb does he thinkI am?July 22 – I bought the modem. I couldn’t figure out where it goes. It wouldn’tfit in the monitor or the printer. I’m confused.July 23 – I finally got the modem in and hooked up. that nine year old nextdoor did it for me. But it still don’t work. I cant get online.July 25 – That nine year old kid next door hooked me up to America Onlinefor me. He’s so smart. I told the kid he was a prodigy. But he says that’sjust another service. What a modest kid. He’s so smart and he does theseservices for people. Anyway he’s smarter then the jerks who sold me themodem. They didn’t even tell me about communications software. Bet theydidn’t know. And why do they put two telephone jack holes in the back of amodem when you only need one? And why do they have one labeled phone whenyou are not suppose to hook it to the phone jack on the wall? I thoughtthe dial tone sounded funny! Boy, are modem makers dumb! But the kid figuredit out by the sound.July 26 – What’s the internet? I thought I was on America Online. Not thisinternet thing. I’m confused.July 27 – The nine year old kid next door showed me how to use this AmericaOnline stuff. I told him he must be a genius. He says that he is comparedto me. Maybe he’s not so modest after all.July 28 – I tried to use chat today. I tried to talk into my computer butnothing happened. maybe I need to buy a microphone.July 29 – I found this thing called usenet. I got out of it because I’mconnected to America Online not usenet.July 30 – These people in this usenet thing keep using capital letters.How do they do that? I never figured out how to type capital letters.Maybe they have a different type of keyboard.JULY 31 – I CALLED THE COMPUTER MAKER I BOUGHT IT FROM TO COMPLAIN ABOUTNOT HAVING A CAPITOL LETTER KEY. THE TECH SUPPORT GUY SAID IT WAS THIS CAPSLOCK KEY. WHY DIDN’T THEY SPELL IT OUT? I TOLD HIM I GOT A CHEAP KEYBOARDAND WANTED A BETTER ONE. AND ONE OF MY SHIFT KEYS ISNT THE SAME SIZE AS THEOTHER. HE SAID THATS A STANDARD. I TOLD HIM I DIDN’T WANT A STANDARDKEYBOARD BUT ANOTHER BRAND. I MUST HAVE HAD AN IMPORTANT COMPLAINT BECAUSE IHEARD HIM TELL THE OTHER SUPPORT GUYS TO LISTEN IN ON OUR CONVERSATION.AUGUST 1 – I FOUND THIS THING CALLED THE USENET ORACLE. IT SAYS THAT IT CANANSWER ANY QUESTIONS I ASK IT. I SENT IT 44 SEPARATE QUESTIONS ABOUT THEINTERNET. I HOPE IT RESPONDS SOON.AUGUST 2 – I FOUND A GROUP CALLED REC.HUMOR. I DECIDED TO POST THIS JOKEABOUT THE CHICKEN THAT CROSSED THE ROAD. TO GET TO THE OTHER SIDE! HA! HA!I WASNT SURE I POSTED IT RIGHT SO I POSTED IT 56 MORE TIMES.AUGUST 3 – I KEEP HEARING ABOUT THE WORLD WIDE WEB. I DON’T NOW SPIDERSGREW THAT LARGE.AUGUST 4 – THE ORACLE RESPONDED TO MY QUESTIONS TODAY. GEEZ IT WAS RUDE. IWAS SO ANGRY THAT I POSTED AN ANGRY MESSAGE ABOUT IT TO REC.HUMOR.ORACLE. IWASNT SURE IF I POSTED RIGHT SO I POSTED IT 22 MORE TIMES.AUGUST 5 – SOMEONE TOLD ME TO READ THE FAQ. GEEZ THEY DIDN’T HAVE TO USEPROFANITY.AUGUST 6 – SOMEONE ELSE TOLD ME TO STOP SHOUTING IN ALL MY MESSAGES. WHATA STUPID JERK. IM NOT SHOUTING! IM NOT EVEN TALKING! JUST TYPING! HOW CANTHEY LET THESE RUDE JERKS GO ON THE INTERNET?August 7 – Why have a Caps Lock key if you’re not suppose to use it? Itsprobably an extra feature that costs more money.August 8 – I just read this post called make money fast. I’m so exited.I’m going to make lots of money. I followed his instructions and posted itto every newsgroup I could find.August 9 – I just made my signature file. Its only 6 pages long. I willhave to work on it some more.August 10 – I just looked at a group called alt.aol.sucks. I read a fewposts and I really believe that aol should be wiped off the face of theearth. I wonder what an aol is.August 11 – I was asking where to find some information about something.Some guy told me to check out ftp.netcom.com. I’ve looked and looked but Ican’t find that group.August 12 – I sent a post to every usenet group on the Internet askingwhere the ftp.netcom.com is. hopefully someone will help. I cant ask the kidnext door. His parents said that when he comes back from my house he’slaughing so hard he can’t eat or sleep or do his homework. So they wont lethim come over anymore. I do have a great sense of humor. I don’t know whythe rec.humor group didn’t like my chicken joke. Maybe they only like dirtystuff. Some people sent me posts about my 56 posts of the joke and theyused bad words.August 13 – I sent another post to every usenet group on the Internetasking where the ftp.netcom.com is. I had forgot yesterday to include my newsignature file which is only 8 pages long. I know everyone will want toread my favorite poem so I included it. I’m also going to add that short storyIlike.August 14 – Some guy suspended my account because of what I was doing. Itold him I don’t have an account at his bank. He’s so dumb.