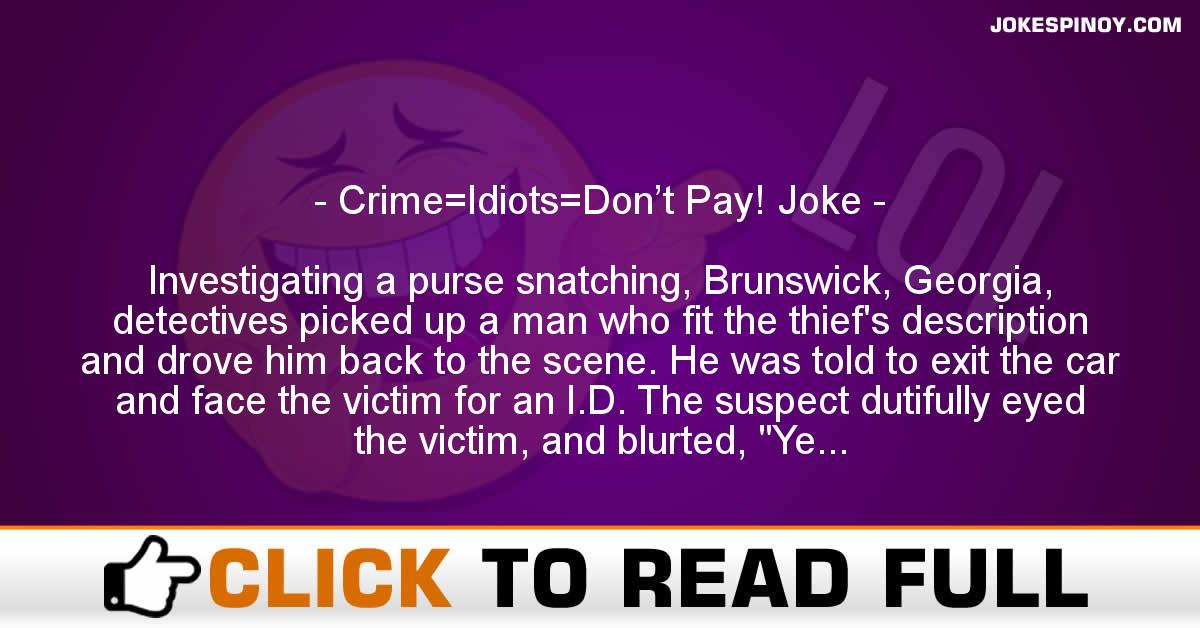 Investigating a purse snatching, Brunswick, Georgia, detectives picked up a man who fit the thief’s description and drove him back to the scene. He was told to exit the car and face the victim for an I.D. The suspect dutifully eyed the victim, and blurted, “Yeah, that’s the woman I robbed.”Elsewhere…In Nashville, they tell of Fred “Bubba” Johnson, the burglar who fell asleep on the sofa of the home he was robbing, only to be awakened by police. Meanwhile…In Thibodaux, Louisiana, a robber with a thick Cajun accent couldn’t get restaurant patrons to understand his demand for money. Frustrated, he whipped out his gun, but it wouldn’t fire. Grabbing the cash register, he ran — but got only three feet before falling down. The register was still plugged into the wall… Unplugging it, he tried again, but a regular diner decked him and called police. And…In Rhode Island, cops were sure they had the right guy when the suspect in a string of coin-machine thefts proceeded to pay his $400 bail…entirely in quarters. Stranger yet….Texas authorities, responding to a store robbery, seized a man who was fleeing naked. When asked about his choice of attire, he said he’d stripped after the job because he figured his clothes would make him identifiable. . .In the Heartland…Lawrence, Kansas – Officers tracked a midnight thief who prided himself on his running speed by following the red lights on his high-tech tennis s***s. . .And Finally. . .In Virginia, a janitor went to great lengths to avoid I.D. in a 7-Eleven robbery, using a ski mask and rental car for the occasion. But he also wore his work uniform, which said “Cedar Woods Apartments” and had his name, Dwayne, stitched across the front. . .