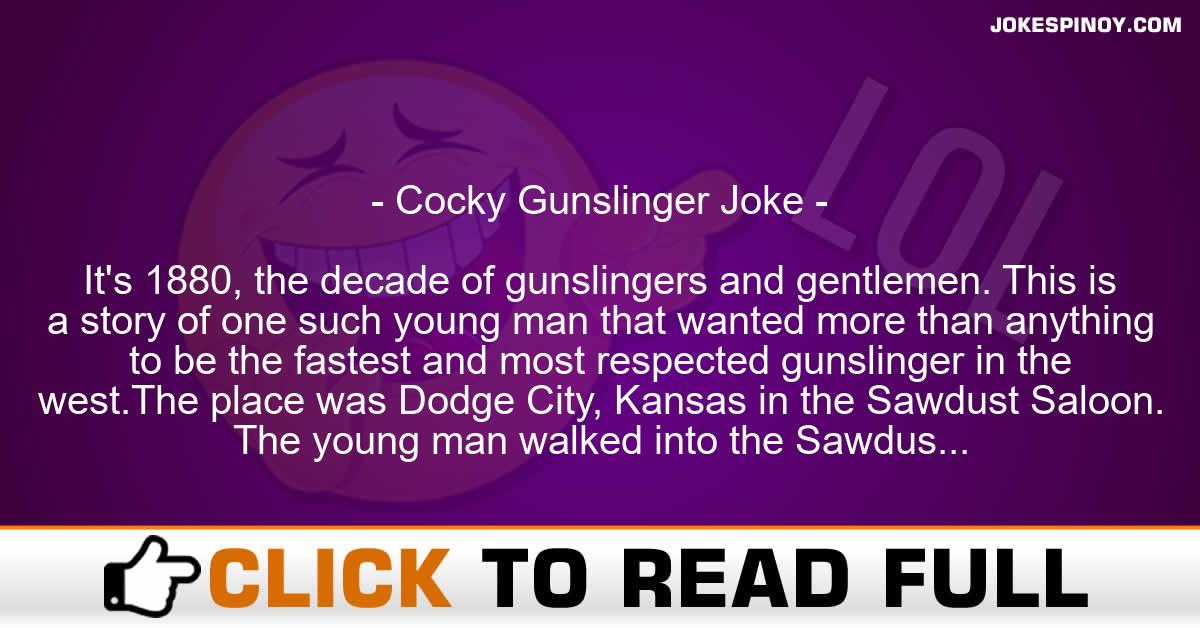 It’s 1880, the decade of gunslingers and gentlemen. This is a story of one such young man that wanted more than anything to be the fastest and most respected gunslinger in the west.The place was Dodge City, Kansas in the Sawdust Saloon. The young man walked into the Sawdust Saloon and, to his surprise, saw Wyatt Earp sitting at a table playing p***r. The young man walked up to Wyatt and said, “Mr. Earp, I would like to be a gunslinger just like you. Could you give me some tips?”Wyatt put his cards down, looked up at the boy and said, “Son, I don’t usually give out tips like this cause it could someday be detrimental to my health, but step back and let me take a look at you.”The boy stepped back and Mr. Earp said, “You look good. You’re wearing black, you’ve got two ivory handled guns with waxed holsters, and you look like a gunslinger. But what’s more important, son, is: Can you shoot?”The young man, happy to show how good he was, quickly drew his pistol from his right holster and without aiming shot the cuff link off of the piano player’s right sleeve.Wyatt said, “That’s good shooting son, but can you shoot with your left hand?”Before Earp could even finish, the boy had already drawn the pistol from his left holster and shot the cuff link off of the piano player’s left shirt sleeve. Very proud of himself the young man blew the smoke away from his six shooter and holstered his gun. “How was that?” the boy asked.Wyatt smiled and looked up and the boy and said, “That was pretty good shooting son. I couldn’t do better than that myself, but I do have one good tip for you.””What’s that?” the boy asked.”I suggest that you go to the kitchen and ask the cook for a large can of lard. Then take both guns of yours and stick them down deep into the lard.”Puzzled the young gunslinger asked why he should do that.Earp put his cards down again, leaned back in his chair, and said, “Well son, when Doc Holliday gets done playing the piano over there, he’s going to take those two guns of yours and. . . “The boy didn’t wait for the rest of the answer.