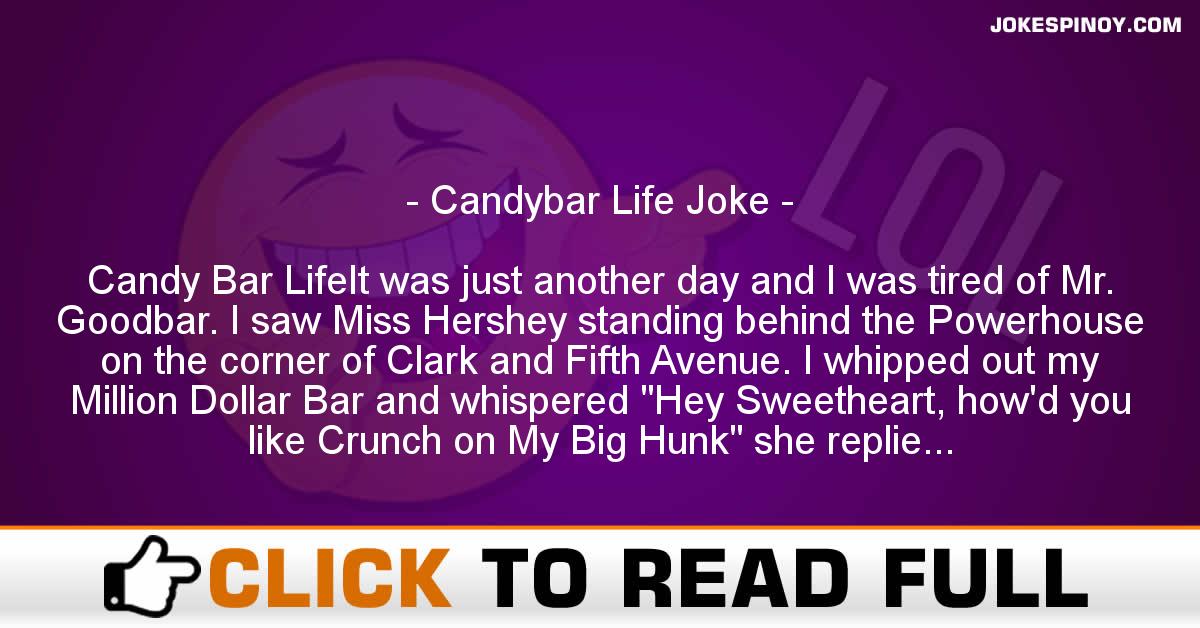 Candy Bar LifeIt was just another day and I was tired of Mr. Goodbar. I saw Miss Hershey standing behind the Powerhouse on the corner of Clark and Fifth Avenue. I whipped out my Million Dollar Bar and whispered “Hey Sweetheart, how’d you like Crunch on My Big Hunk” she replied “Oh Henry, what a Whopper.”Well she immediately went down on my Tootsie Roll and it was pure Almond Joy. I couldn’t resist her Charms and reached out and grabbed her Mounds, it was easy to see this little Twix had the Red Hots for me. It was all I could do to hold the Snickers and Crackle as my Butterfinger slipped into her tight little Kit Kat as she screamed “Oh Henry, Oh Henry” soon she was fondling my Peter Pan and Zagnut’s. It wasn’t long before I blew my Milk Duds to Mars, which gave her a taste of the old Milky Way. She asked about M&M , but I said “Hey Chicklet, no kinky stuff you little Reese’s pieces.Don’t be a Zero, be a Lifesaver. Why don’t you grab my Whatchamacallit and slip it up your Bit ‘O’ Honey”(What a piece of Juicy Fruit she was, too!) She screamed “Oh you Cracker Jack, better than the Three Muskteers” as I rammed my Ding Dong up her Rocky Road and into her Peanut Butter Cup. Well I was giving it to her Good ‘N’ Plenty when all of a sudden…my Starburst! Yeah as luck would have it she started to get Chunky, complained of a Wrigley in her stomach and nine months later out popped “BABY RUTH.”

Topic of Interest:    life of a candy bar joke