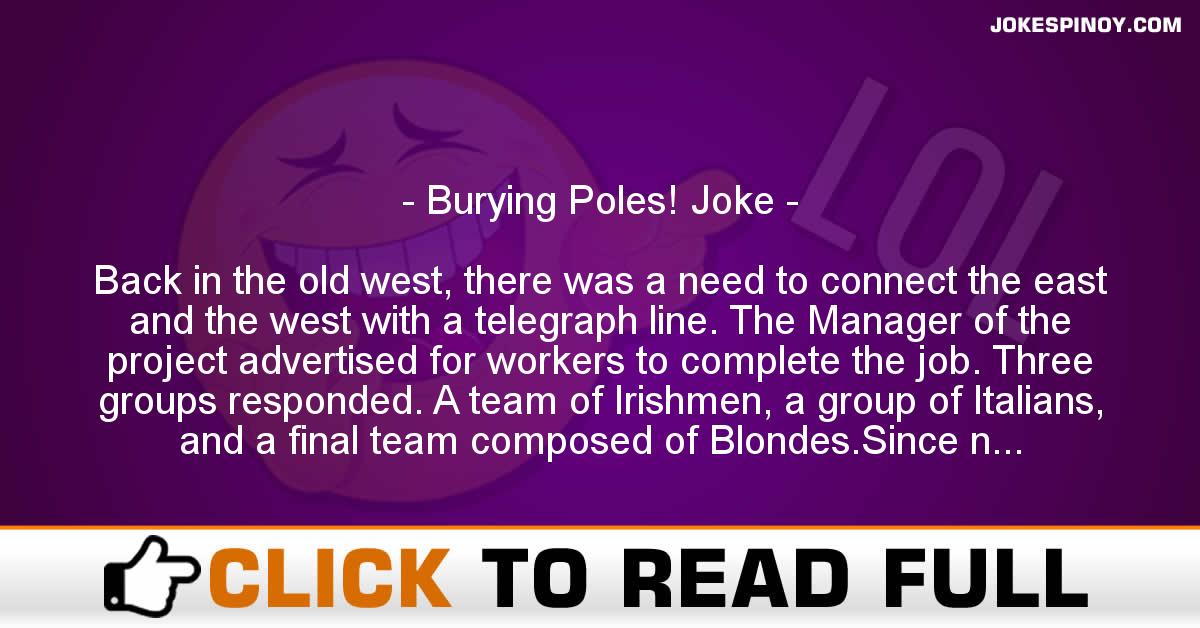 Back in the old west, there was a need to connect the east and the west with a telegraph line. The Manager of the project advertised for workers to complete the job. Three groups responded. A team of Irishmen, a group of Italians, and a final team composed of Blondes.Since none of the groups would work with anyone from the other two groups, the project supervisor decided to a*sign each group to a different part of the line, and then see which team set the most poles.The first task was to set the poles. The Supervisor sent each group out to a different location. Before they left, he advised all three groups that the one to bury the most poles today, would receive a bonus.At the end of the day, the foreman of the Italians reported back to the Supervisor. The Supervisor inquired of him how many poles had been set by his team. He answered48. The Supervisor was delighted. He advised the Italian to stay awhile until he heard how the Irishmen and the Blondes had done…Next to report was the foreman of the Irishmen group. When asked, he reported that they had set 53 poles that day. Again the Superivsor was thrilled. He dismissed the Italian foreman and asked the Irishman to remain until the Blondes checked in.A little while later the Blonde forewoman reported to the Supervisor. “How many poles did your group set?” He asked. “Two.” Replied the Blonde forewoman. “What! Just, two!” exclaimed the Supervisor. “The Italians set 48 poles, and the Irishmen set53. How could you Blondes have only set two poles?””It may be true the Italians and Irishmen buried more poles than us,” replied the Blonde. “But you should see how much of the poles those bozos left sticking out of the ground!”