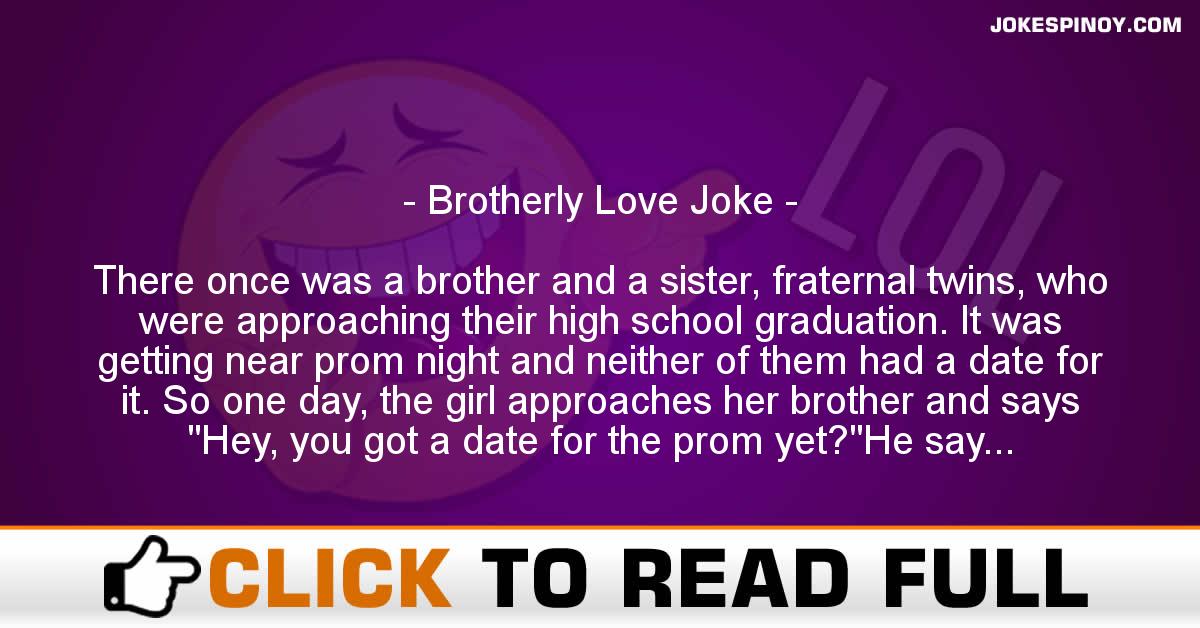 There once was a brother and a sister, fraternal twins, who were approaching their high school graduation. It was getting near prom night and neither of them had a date for it. So one day, the girl approaches her brother and says “Hey, you got a date for the prom yet?”He says “No, why? You got someone lined up for me?” “You might say that. Why don’t you take me to the prom?””Take you? You kidding? You’re my sister!” “Well, are you taking somebody else out?””You know I don’t have a date, Sis. ” “And neither do I. But we both want to go to the prom, don’t we?” Her brother nods. She continues, “So we should go with each other.”The brother can’t see anything wrong with her reasoning, so he tells his sister that if neither of them has a date by Wednesday evening he will take her to the prom. Wednesday evening rolls around. Neither of the siblings has a date, so the brother tells his sister that he’ll take her to the prom on Friday.At the prom, both of them have a good time. The brother is glad that his sister talked him into taking her. Then, while he’s standing at the punch bowl, his sister comes up to him again.”Hey, brother, let’s dance. “He looks around to make sure that nobody heard her. “Look, Sis, this is the Senior Prom, okay? I’m not going to dance with my own sister at the prom, okay?””Don’t be so shy. Look, Jimmy Elder is dancing with his cousin. So why can’t you dance with your sister?””Oh . . . all right. “So they dance, a slow number. The rest of the prom pa*ses by and after a while it’s over and time to go. Both of them have had a good time.In the car, with the brother at the wheel, the sister looks over at him and says, “Let’s not go straight home.”He gives her a curious look and says, “What are we going to do instead?””Oh, I don’t know. Just drive around.”He agrees, and after they have driven around a while, out in the country, she looks over at him again and says “Want to find some place to park?””Hell,” he says, “are you crazy? You’re my sister, I’m not going parking with you!””Who said anything about ‘going parking’? Let’s just pull over somewhere and talk for a while, okay? It’s been a busy year for both of us– how long has it been since we’ve had a chance to talk to each other?”So she finally talks her brother into pulling the car over on a secluded back road, and after a few minutes of idle talk, she looks over at him again.”Hey . . . ” she says.”What?””Why don’t you kiss me?””You’ve been suggesting a lot of weird things lately, you know that? I’m not going to kiss you, you’re my sister! “And he reached for the ignition switch to start the car.She reached out and took his hand. “I know I’m your sister. You’ve mentioned that a lot lately. And you’re my brother. And don’t we love each other? Why shouldn’t we kiss if we feel like it?” She kissed him on the cheek and he kissed her back. After a few minutes of kissing, she whispered in his ear, “Come on. Let’s do it.””Do what,” said her brother, but he had a good idea of what his sister had in mind.”You know what,” his sister replied.”I can’t do that with you, you’re my. . . ” His voice trailed off.While he was on top of her, his sister murmured, “You know, you’re a lot lighter than Dad.””I know,” said her brother. “Mom told me.”