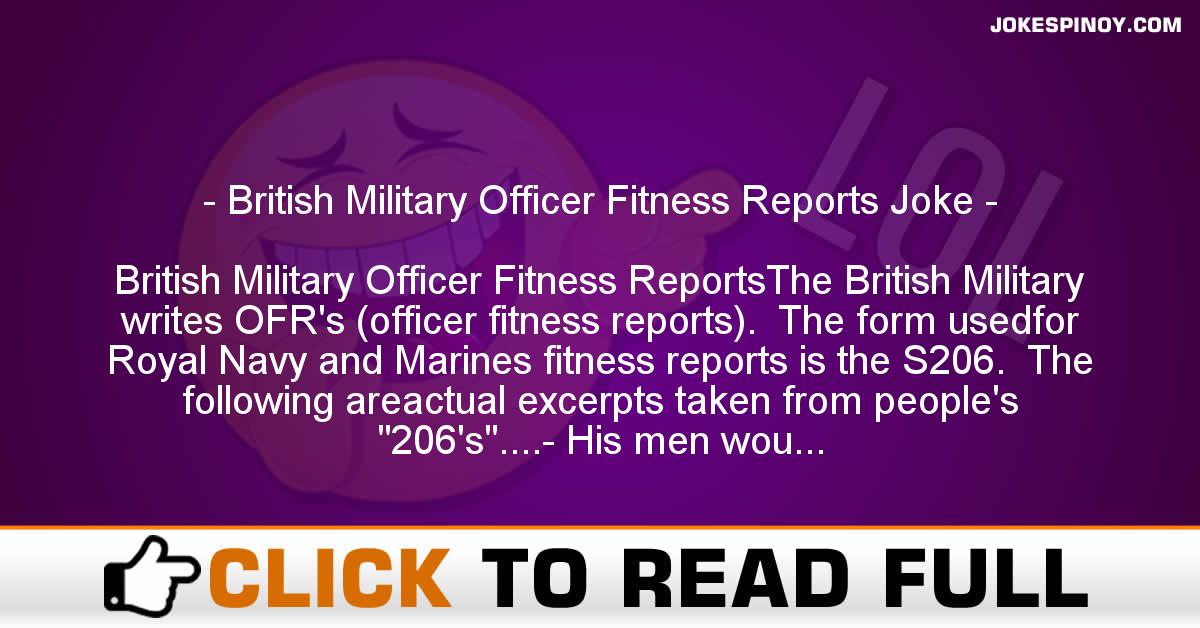 British Military Officer Fitness ReportsThe British Military writes OFR’s (officer fitness reports). The form usedfor Royal Navy and Marines fitness reports is the S206. The following areactual excerpts taken from people’s “206’s”….- His men would follow him anywhere, but only out of curiosity.- I would not breed from this Officer.- This Officer is really not so much of a has-been, but more of a definitely won’t-be.- When she opens her mouth, it seems that this is only to change whichever foot was previously in there.- He has carried out each and every one of his duties to his entire satisfaction.- He would be out of his depth in a car park puddle.- Technically sound, but socially impossible.- This Officer reminds me very much of a gyroscope – always spinning around at a frantic pace, but not really going anywhere.- This young lady has delusions of adequacy.- When he joined my ship, this Officer was something of a granny; since then he has aged considerably.- This Medical Officer has used my ship to carry his genitals from port to port, and my officers to carry him from bar to bar.- Since my last report he has reached rock bottom, and has started to dig.- She sets low personal standards and then consistently fails to achieve them.- He has the wisdom of youth, and the energy of old age.- This Officer should go far – and the sooner he starts, the better.- In my opinion this pilot should not be authorized to fly below 250 feet.- The only ship I would recommend this man for is citizenship.- Works well when under constant supervision and cornered like a rat in a trap- This man is depriving a village somewhere of an idiot.- Only occasionally wets himself under pressure