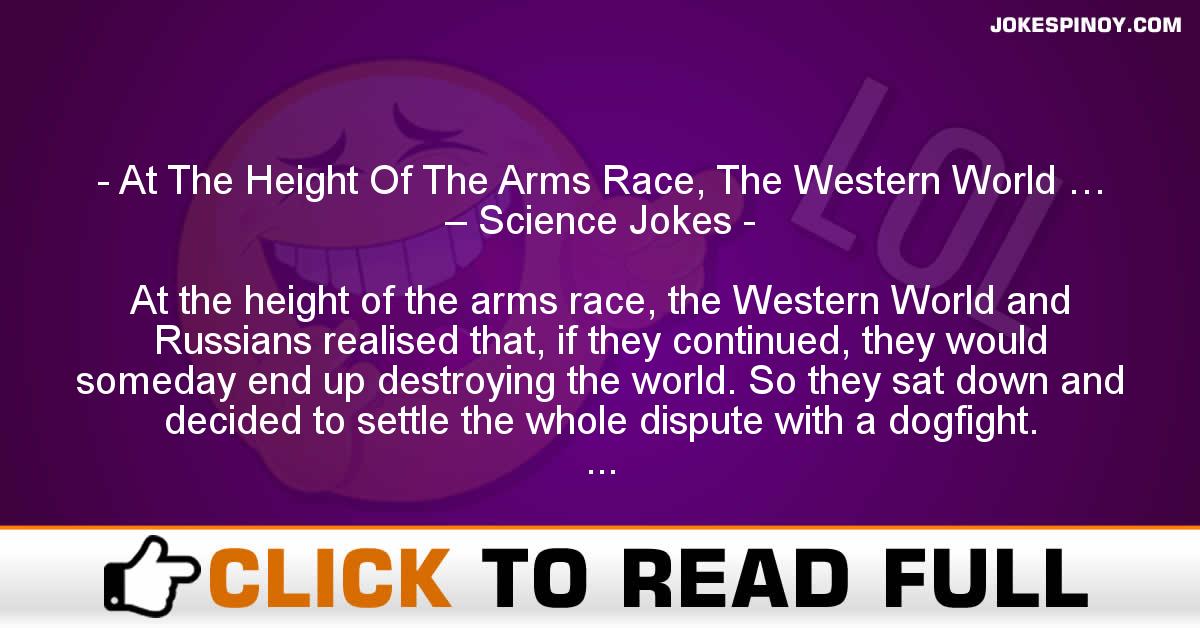 At the height of the arms race, the Western World and Russians realised that, if they continued, they would someday end up destroying the world. So they sat down and decided to settle the whole dispute with a dogfight.
The negotiators agreed that each country would take five years to develop the best fighting dog they could. The dog that won the fight would earn its country the right to rule the world. The losing side would have to lay down its arms.
The Russians found the biggest, meanest Dobermans and Rottweilers in the world. They bred them together and then crossed their offspring with the meanest Siberian Wolves. They selected only the biggest, strongest puppy from each litter, killed all the other puppies and fed the lone dog all of the milk. They used steroids and trainers in their quest for the perfect killing machine, until, after the five years were up, they had a dog that needed iron prison bars on his cage. Only the trainers could handle this beast.
When the day of the big fight arrived, the British showed up with a strange animal: It was a nine-foot-long Dachshund. Everyone felt sorry for us. No one else thought this weird animal stood a chance against the growling beast in the Russian camp. The bookies predicted the Russians would win in less than a minute.
The cages were opened. The Dachshund waddled toward the centre of the ring. The Russian dog leapt from his cage and charged the giant sausage-dog. As he got to within an inch of the Brits dog, the Dachshund opened its jaws and swallowed the Russian beast in one bite. There was nothing left but a small bit of fur from the killer dog’s tail.
The Russians approached the British trainers, shaking their heads in disbelief. “We do not understand. Our top scientists and breeders worked for five years with the meanest, biggest Dobermans and Rottweilers. They developed a killing machine.”
“Really?” the Brits replied. “We had our top plastic surgeons working solidly for five years to make an alligator look like a Dachshund…”

Topic of Interest:    arms race joke,   when was the height of the arms race