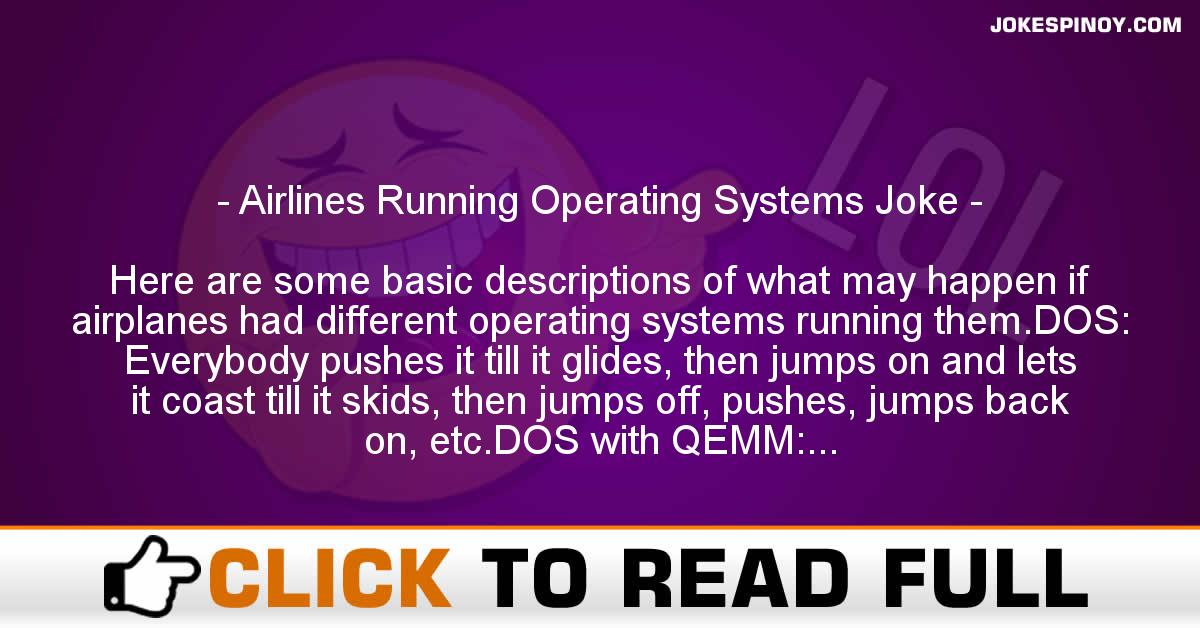 Here are some basic descriptions of what may happen if airplanes had different operating systems running them.DOS: Everybody pushes it till it glides, then jumps on and lets it coast till it skids, then jumps off, pushes, jumps back on, etc.DOS with QEMM: Same as DOS, but with more leg room for pushing.Macintosh: All the flight attendants, captains and baggage handlers look the same, act the same and talk the same. Every time you ask a question, you are told you don’t need to know, don’t want to know and everything will be done for you without your knowing, so just shut up.OS/2: To get on board, you have to have your ticket stamped 10 different times by standing in 10 different lines. Then you fill out a form asking how you want your seating arranged–with the look and feel of an ocean liner, a pa*senger train or a bus. If you get on board and off the ground, you will have a wonderful trip, except when the rudder and flaps freeze, in which case you have time to say your prayers before you crash.Windows: Colorful airport terminal, friendly flight attendants, easy access to a plane, and an uneventful takeoff. Then, all in a sudden, boom! You blow up without any warning whatsoever.NT: The terminal and flight attendants all look like those the Windows plane uses, but the process of checking in and going through security is a nightmare. Once aboard, those pa*sengers with first cla*s tickets can go anywhere they want and arrive in half the time, while the vast majority of pa*sengers with coach tickets can’t even get aboard.Unix: Everyone brings one piece of the plane. Then they go on the runway and piece it together, all the while arguing about what kind of plane they’re building.CAIRO: The airplane is distributed among 47 different hangars in 13 airports scattered over 8 states, 4 Canadian provinces, and a remote mountain hideaway in Nicaragua. But you don’t need to know where the airplane is or who it belongs to in order to fly it. Actually, you don’t fly the airplane itself; you fly a simulation that behaves just like the real thing except that you don’t go anywhere. But that’s okay, because when the world is at your fingertips you never need to leave home.