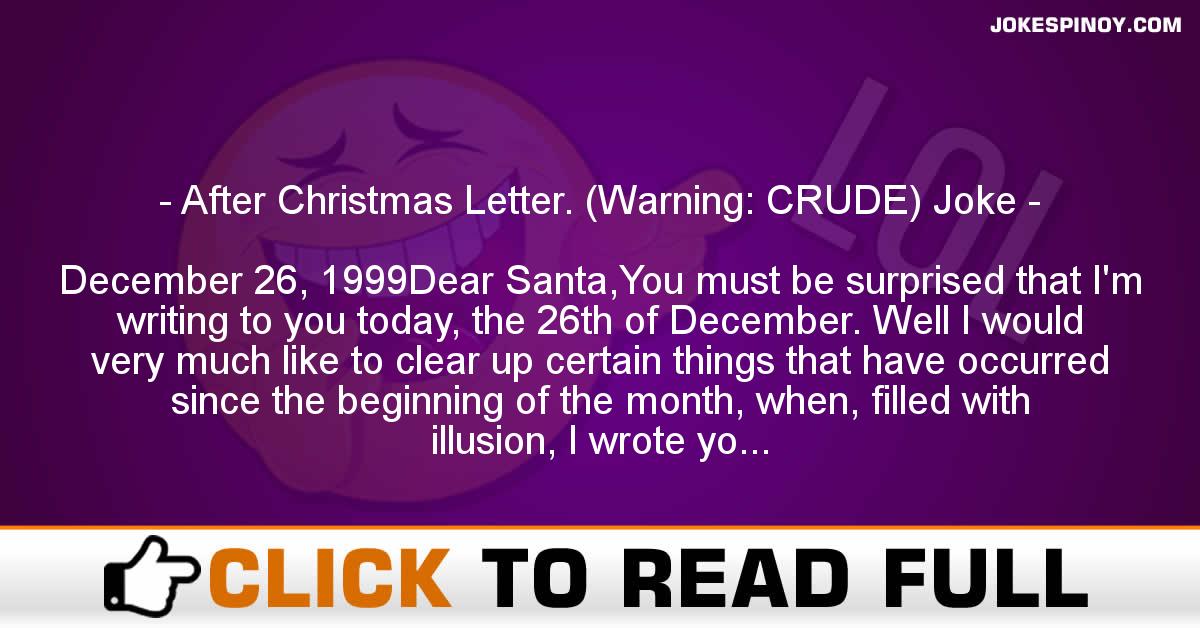 December 26, 1999Dear Santa,You must be surprised that I’m writing to you today, the 26th of December. Well I would very much like to clear up certain things that have occurred since the beginning of the month, when, filled with illusion, I wrote you my letter.I asked for a bicycle, an electric train set, a pair of roller blades, and a football uniform. I destroyed my brain studying the whole year. Not only was I the first in my cla*s, but I had the best grades in the whole school.I’m not going to lie to you, there was no one in my entire neighborhood that behaved better than me, with my parents, my brothers, my friends, and with my neighbors. I would go on errands, and even help the elderly cross the street. There was virtually nothing within reach that I would not do for humanity.What balls do you have leaving me a f*****g yo-yo, a stupid whistle, and a pair of socks? What the f**k were you thinking you fat son of a bitch?!That you have taken me for a sucker the whole f*****g year to come out with some shit like this under the tree. As if you hadn’t f**ked me enough, you gave that little faggot across the street so many toys that he can’t even walk into his house.Don’t let me see you trying to fit your big a*s down my chimney next year. I’ll f**k you up. I’ll throw rocks at those stupid reindeer and scare them away so you’ll have to walk back to the f*****g North Pole, just like what I have to do now since you didn’t get me that f*****g bike.F**K YOU SANTA. Next year you’ll find out how bad I can be, you FAT-SON-OF-A-BITCH!Sincerely,Little Johnny