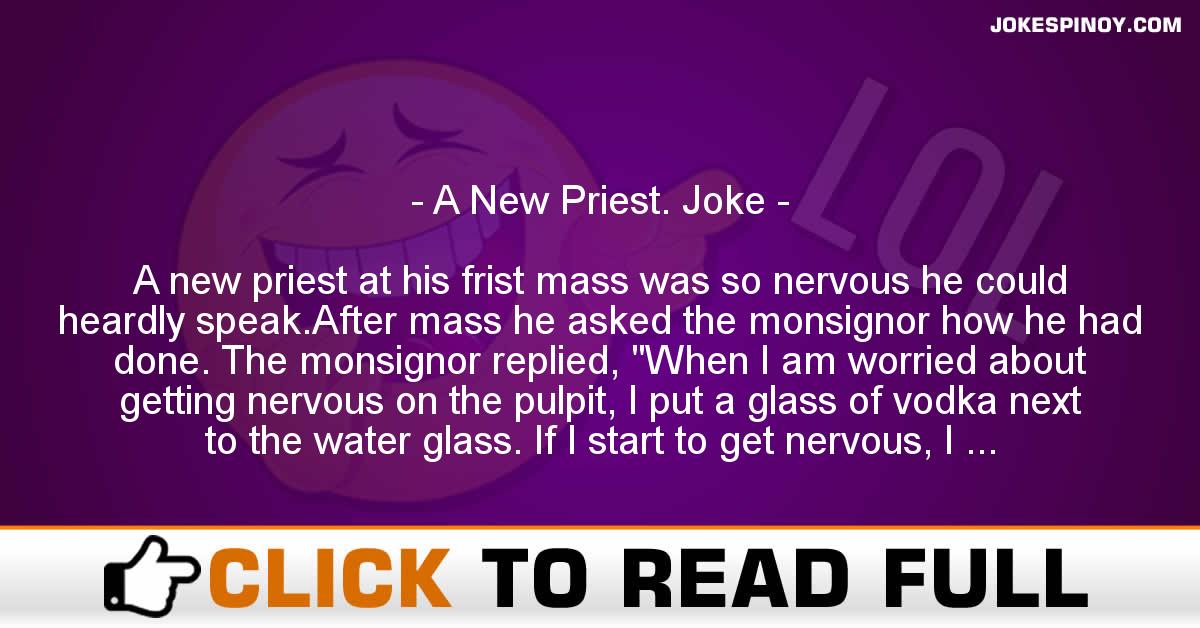 A new priest at his frist ma*s was so nervous he could heardly speak.After ma*s he asked the monsignor how he had done. The monsignor replied, “When I am worried about getting nervous on the pulpit, I put a gla*s of vodka next to the water gla*s. If I start to get nervous, I take a sip.” So the next Sunday the priest took the monsignors advice. At the beginning of the sermon, he got nervous and took a drink. He proceeded to talk up a storm. Upon his return to his office he found the following note on the door.1. Sip the Vodka, don’t gulp.2. There are 10 commandments, not 12.3. There are 12 disciples, not 10.4. Jesus was consecrated, not constipated.5. Jacob wagered his donkey, he did not get his a*s.6. We do not refer to Jesus Christ and his apostles as J.C. and the boys.7. The Father, Son, and Holy Ghost are not referred to as Daddy, Junior, and the Spook.8. David slew Goliath, he did not kick the crap out of him.9. When David was hit by a rock and knocked off his donkey, don’t say…he was stoned off his a*s.10. We do not refer to the cross as the “Big T”.11. When Jesus broke the bread at the Last Supper he said, “Take this and eat it, for it is my body.” He did not say, “Eat me.”12. The Virgin Mary is not called “Mary with the Cherry.”13. The recommended grace before a meal is not: Rub-A-Dub-Dub thanks for the gurb, Yeah! God.14. Next Sunday there will be a taffy pulling contest at St. Peter’s, not a peter pulling contest at St. Taffy’s.