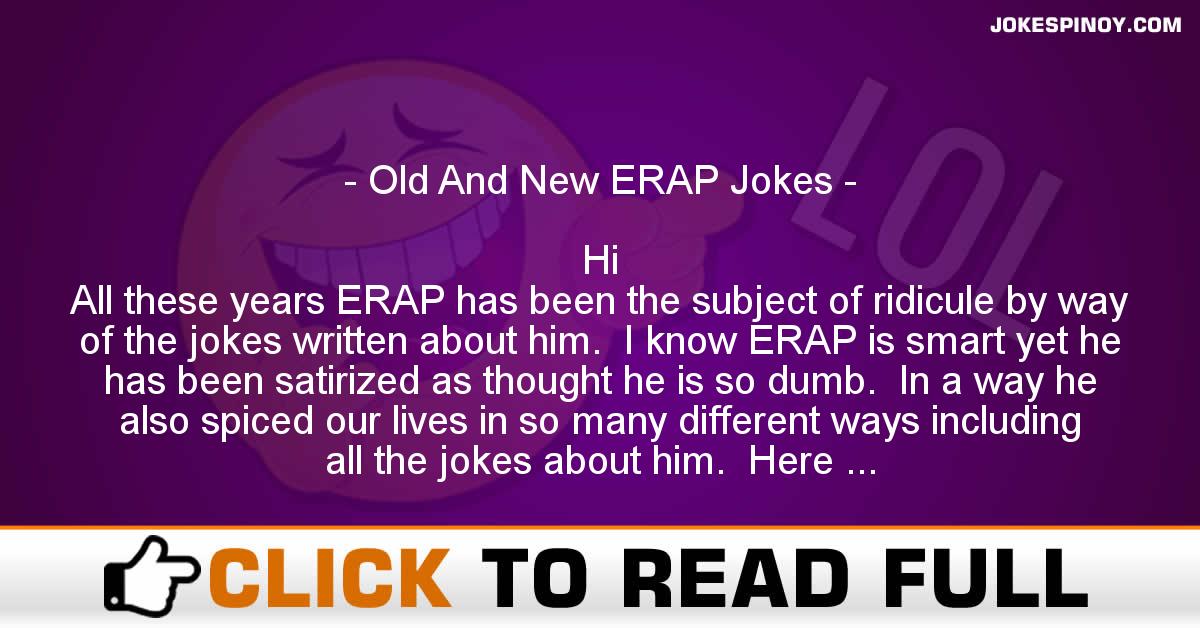 Hi
All these years ERAP has been the subject of ridicule by way of the jokes written about him. I know ERAP is smart yet he has been satirized as thought he is so dumb. In a way he also spiced our lives in so many different ways including all the jokes about him. Here are some nice jokes my niece just sent me from the Phils. If this is your first time to read it laugh heartily, if not laugh anyway.
Jgly / Daly City
————
Joke # 1: Sa panliligaw ni Erap, mahili g siyang sumulat ng coded love messages tulad ng:
ITALY – I truly adore and love you
SASAYA – Stay as Sweet as you are
Para lalong bumilib and kanyang nililigawan, sinikap niyang gumawa ng ‘love letter’ na gamit ang alphabet:
ABC – Always be careful
DEF – Don’t Ever forget
GHI – Go Home Immediately
JKLM – Just Keep Loving Me
NOPQRSTUVW – No One Perfectly Quite Romantic Should Treat U Very=2 0Well Napa-whew at pinagpawisan si Erap. Tatlong titik na lang and natitira…XYZ.
Pinag-isipan ito nang husto ni Erap. Makalipas ang oras, napangiti siya at pinalakpakan ang kanyang sarili bago sinulat ang:
XYZ – Xee You Zoon!!

Joke #6: ALLEGATIONS
In a cabinet meeting ERAP (galit na galit) :
THERE HAS BEEN A LOT OF ALLEGATIONS THESE DAYS AND I WOULD LIKE TO KNOW WHO THE ‘ALLIGATORS’ ARE.
Joke #7: The most intell igent ‘presidentiable’
Miriam Santiago, has challenged the least intelligent presidentiable to a televised debate. To make things interesting, Miriam says that every time she asks Erap a question which he cannot answer, Erap has to pay Miriam five pesos. BUT if Erap asks Miriam a question which she cannot answer, Miriam has to give Erap five thousand pesos.
Miriam asks the first question: ‘What’s the distance from the earth to the moon?’ Erap doesn’t say a word, reaches for his wallet, pulls out a five-peso bill and hands it to Miriam.
Now, it’s his turn. He asks Miriam: ‘What goes up a hill with three legs, and comes down with four?’ Miriam looks at him with a puzzled look.
She whips out her laptop computer and searches all her references. She taps into the phone with her modem and searches the Net. Frustrated, she sends E-mails to all her aides, assistants, and friends. All to no avail.
After over an hour, she admits defeat and hands Erap five 1000-peso bills. Erap says nothing, but politely accepts the P5,000 and turns away to go home.
Miriam is a poor sport and demands from Erap, ‘Well, so what IS the answer!?’
Without a word, Erap pulls out his wallet and gives Miriam another five pesos….