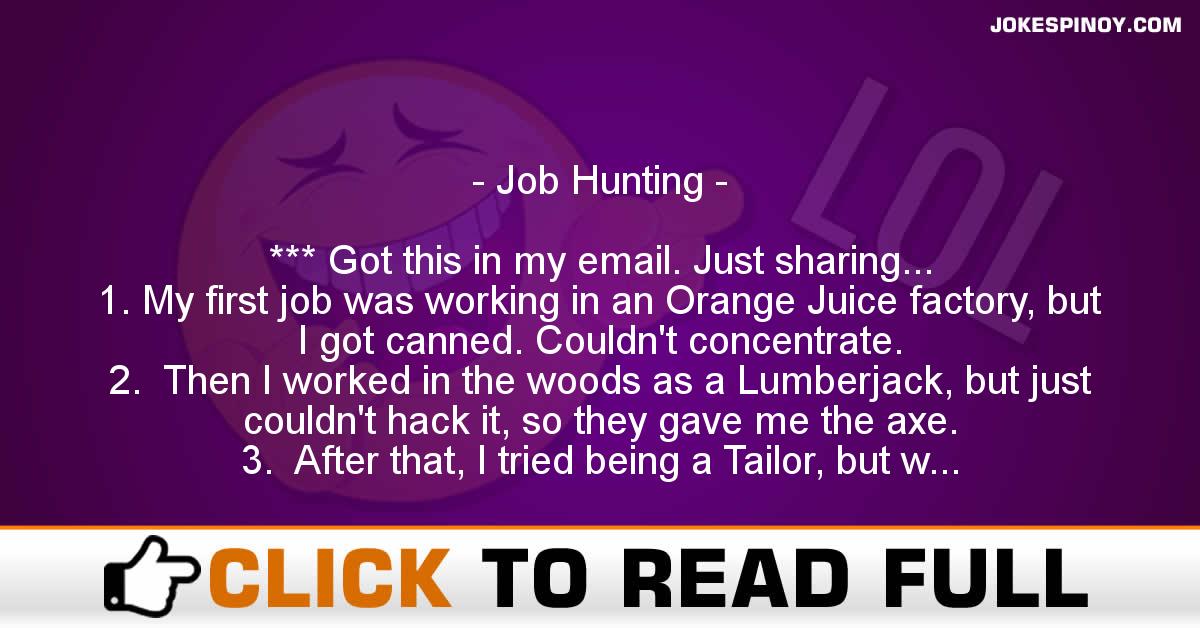 *** Got this in my email. Just sharing…
1. My first job was working in an Orange Juice factory, but I got canned. Couldn’t concentrate.
2. Then I worked in the woods as a Lumberjack, but just couldn’t hack it, so they gave me the axe.
3. After that, I tried being a Tailor, but wasn’t suited for it — mainly because it was a sew-sew job.
4. Next, I tried working in a Muffler Factory, but that was too exhausting.
5. Then, tried being a Chef – figured it would add a little spice to my life, but just didn’t have the thyme.
6. Next, I attempted being a Deli Worker, but any way I sliced it… couldn’t cut the mustard.
7 My best job was as a Musician, but eventually found I wasn’t noteworthy.
8. I studied a long time to become a Doctor, but didn’t have any patience.
9. Next, was a job in a Shoe Factory. Tried hard but just didn’t fit in.
10. I became a Professional Fisherman, but discovered I couldn’t live on my net income.
11. Managed to get a good job working for a Pool Maintenance Company, but the work was just too draining.
12. So then I got a job in a Workout Center, but they said I wasn’t fit for the job.

13. After many years of trying to find steady work, I finally got a job as a Historian – until I realized there was no future in it.
14. My last job was working in Starbucks, but had to quit because it was the same old grind.

15. SO, I TRIED Retirement AND FOUND I’M PERFECT FOR THE JOB!