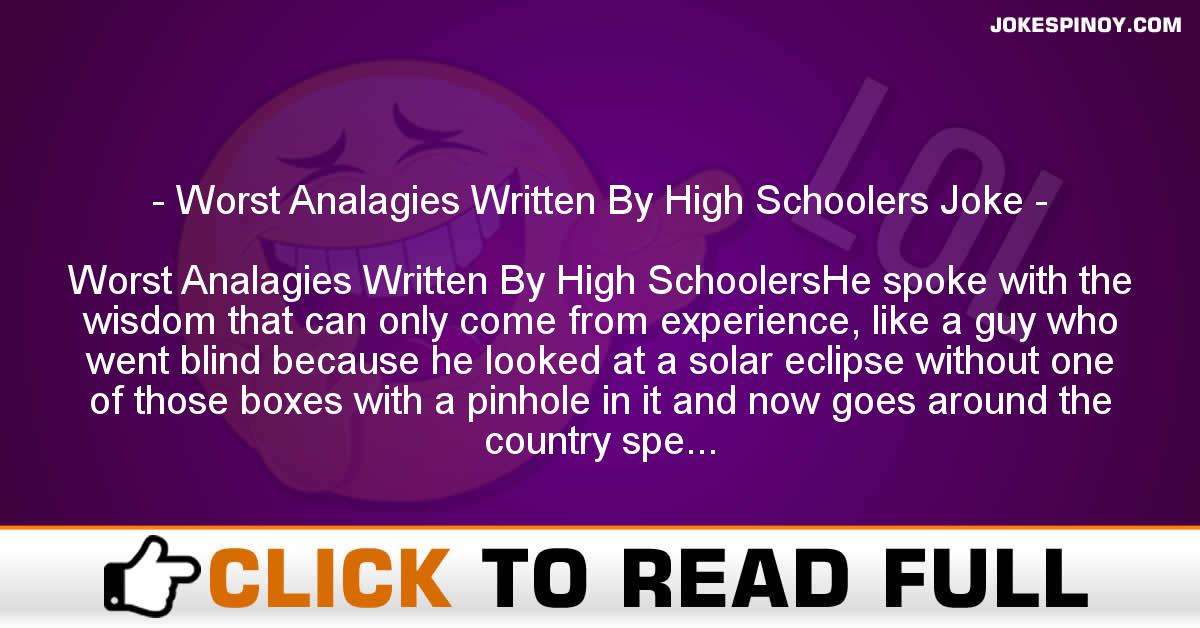 Worst Analagies Written By High SchoolersHe spoke with the wisdom that can only come from experience, like a guy who went blind because he looked at a solar eclipse without one of those boxes with a pinhole in it and now goes around the country speaking at high schools about the dangers of looking at a solar eclipse without one of those boxes with a pinhole in it.She caught your eye like one of those pointy hook latches that used to dangle from screen doors and would fly up whenever you banged the door open again.The little boat gently drifted across the pond exactly the way a bowling ball wouldn’t.McBride fell 12 stories, hitting the pavement like a Hefty Bag filled with vegetable soup.From the attic came an unearthly howl. The whole scene had an eerie, surreal quality, like when you’re on vacation in another city and “Jeopardy” comes on at 7 p.m. instead of 7:30.Her hair glistened in the rain like nose hair after a sneeze. Her eyes were like two brown circles with big black dots in the center.Bob was as perplexed as a hacker who means to access T:flw.quid55328.comaaakk/[email protected] but gets T:flw.quidaaakk/[email protected] by mistake.Her vocabulary was as bad as, like, whatever.He was as tall as a six-foot-three-inch tree. The hailstones leaped from the pavement, just like maggots when you fry them in hot grease.Her date was pleasant enough, but she knew that if her life was a movie this guy would be buried in the credits as something like “Second Tall Man.”Long separated by cruel fate, the star-crossed lovers raced across the gra*sy field toward each other like two freight trains, one having left Cleveland at 6:36 p.m. traveling at 55 mph, the other from Top*ka at 4:19 p.m. at a speed of 35 mph.The politician was gone but unnoticed, like the period after the Dr. on a Dr Pepper can.They lived in a typical suburban neighborhood with picket fences that resembled Nancy Kerrigan’s teeth.John and Mary had never met. They were like two hummingbirds who had also never met.The thunder was ominous-sounding, much like the sound of a thin sheet of metal being shaken backstage during the storm scene in a play.His thoughts tumbled in his head, making and breaking alliances like underpants in a dryer without Cling Free.The red brick wall was the color of a brick-red Crayola crayon.