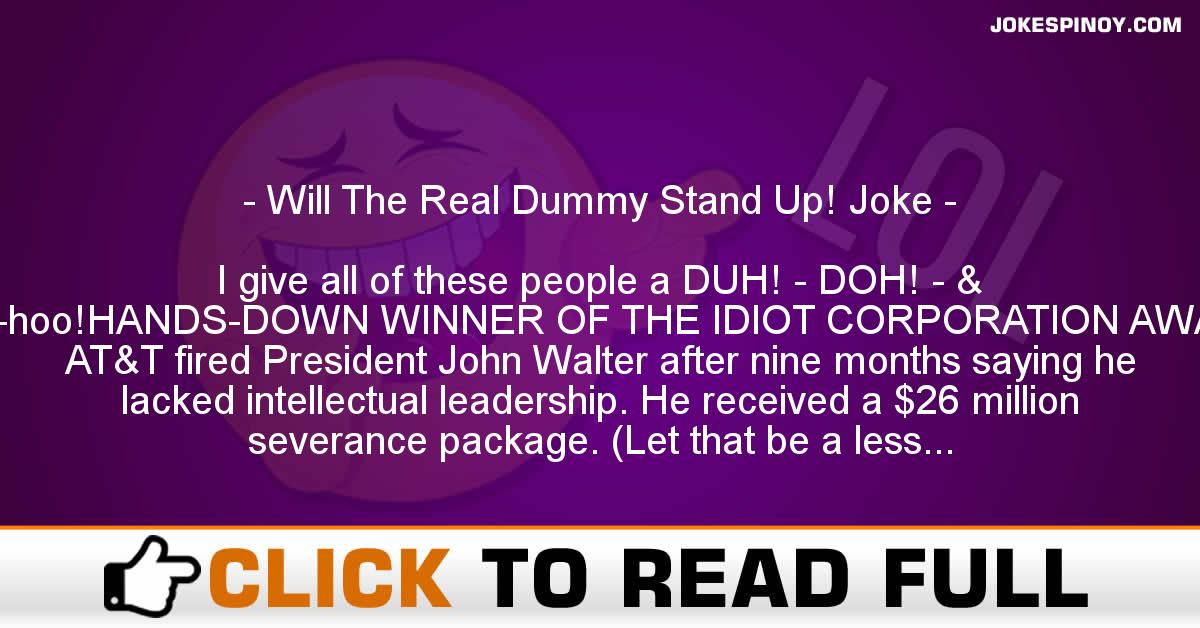 I give all of these people a DUH! – DOH! – & Woo-hoo!HANDS-DOWN WINNER OF THE IDIOT CORPORATION AWARD! AT&T fired President John Walter after nine months saying he lacked intellectual leadership. He received a $26 million severance package. (Let that be a lesson to him!)WITH A LITTLE HELP FROM OUR FRIENDS! Police in Oakland, California spent two hours attempting to subdue a gunman who had barricaded himself inside his home. After firing ten tear gas canisters, officers discovered that the man was standing beside them, shouting out to give himself up. (No one ever said you had to be “smart” to be a cop.)NOW THIS SOUNDS LIKE IT WAS PLANNED OUT WELL…NOT! An Illinois man, pretending to have a gun, kidnapped a motorist and forced him to drive to two different automated teller machines. The kidnapper then proceeded to withdraw money from his own bank account. (Maybe he should have pretended to have a brain!)WHEN YOU THINK YOU’RE HAVING A BAD DAY…READ THIS Fire investigators on Maui have determined the cause of a blaze that destroyed a $127,000 home last month – a short in the homeowner’s newly installed fire prevention alarm system. “This is even worse than last year, “said the distraught homeowner, “when someone broke in and stole my new security system…” (…hmmm, could this be the Illinois guy?)NOW THIS IS WHAT I CONSIDER A DEDICATED CROOK! A man walked into a Topeka, Kansas Kwik Shop and asked for all the money in the cash drawer. Apparently, the take was too small so he tied up the store clerk and worked the counter himself for three hours until police showed up and grabbed him. (Wonder if he paid himself time and 1/2 for the overtime?)I WANNA BE A BRAIN SURGEON WHEN I GROW UP! In Ohio, an unidentified man in his late twenties walked into a police station with a 9-inch wire protruding from his forehead and calmly asked officers to give him an X-ray to help him find his brain, which he claimed had been stolen. Police were shocked to learn that the man had drilled a 6-inch deep hole in his skull with a Black & Decker power drill and had stuck the wire in to try and find the missing brain. (After his hospital stay, he was immediately enrolled in law school!)FOOT IN MOUTH…UP TO THE KNEE! Police in Los Angeles had good luck with a robbery suspect who just couldn’t control himself during a lineup. When detectives asked each man in the lineup to repeat the words, “Give me all your money or I’ll shoot”, the man shouted, “That’s not what I said!” (Turns out, the witness was Blonde and didn’t pick him!)NOT THE SHARPEST KNIFE IN THE DRAWER! In Modesto, CA, Steven Richard King was arrested for trying to hold up a Bank of America branch without a weapon. King used a thumb and a finger to simulate a gun but unfortunately he failed to keep his hand in his pocket. (Banks should keep Monopoly money on hand for these bright crooks.)